The Mitchells Vs the Machines

To say that machines will eventually take over the world sounds almost like a statement that doesn’t fully understand the concept; after all, machines in general and technology specifically have already taken over the world.

These days we rely so heavily on tech, that it would almost be too difficult to imagine a world without it. Can you imagine, for instance, if you couldn’t refer to a dedicated weather app to find out what it was like out, instead having to actually look outside? It almost doesn’t bare thinking about.

Or the idea of no longer having a virtual assistant at your beck and call 24/7, to give you a recipe for lasagne, or turn the living room light on without actually getting up.

This latest animation acknowledges the need we have for tech in our lives, but also asks the pertinent question: what happens when tech goes bad? 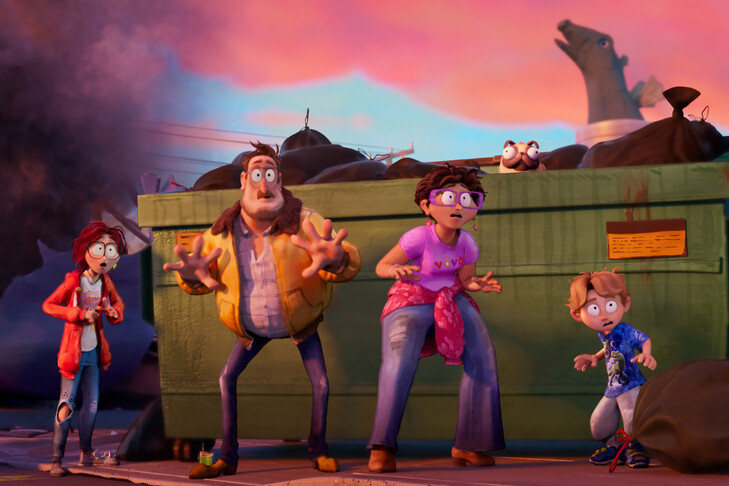 They soon realiised that tip diving was fraught with danger.

Preparing for a huge upheaval in their lives are the Mitchells. Eldest Katie (Abbi Jacobson) is readying herself to leave the nest and head off to college, where she will be studying film. Dad Rick (Danny McBride) is trying his best to be supportive, but he can’t quite get his head around the course she’s on, and how useful it might be in the real world.

In a bid to show support however, he cancels her flight in favour of a family road trip, so the whole family can see her off.

Meanwhile, in Silicon Valley, Pal Labs are holding a press conference for their latest update to their PAL virtual assistant, or so that’s what everyone thinks. But it’s a little more than that; it’s actually a robot with PAL built in. Now instead of just asking PAL stuff, users can now ask PAL to actually do stuff, in their robotic form.

Unfortunately for everyone concerned however, the robots appear to have their own agenda, which involves the end of the human race. With them keen to take over the world, they get rid of all the humans, one by one, until all that are left are the Mitchells. With their road trip seeming less important in the grand scheme of things, it’s left to the Mitchells to take on the robots and save the planet. 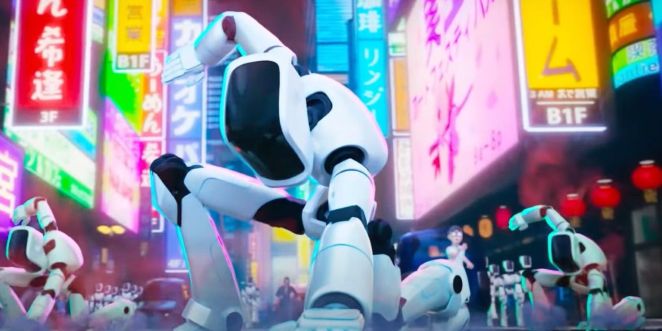 Although vocally they were patchy, no-one could deny the new robot K pop crew had moves.

Although this film features the rise of the machines, it’s rather unfortunate that its focus lies elsewhere, that of the family dynamic. Despite the interesting theme of the end of the world, it prefers to concentrate on the rather stereotypical father daughter relationship. This wouldn’t be so bad if the Mitchells were vaguely interesting, but sadly they’re not.

There has been a huge rise in the number of animated families in the last decade or so, with competition rife for the most dysfunctional between the likes of The Simpsons, The Griffins, The Smiths, etc. Their antics are often extreme, constantly swinging wildly from loveable to loathable within seconds. Unfortunately for the Mitchells, they don’t rate within these parameters, being as they are, constantly nice. And if you don’t love nor hate them, really, what’s the point of them? They are safe, well-meaning, and altogether dull, which really aren’t the best traits for an animated family to have in this day and age.

The relationship between father and daughter is particularly gnawing, as if an audience want to see heart in a film about machines taking over the world. No. No they don’t.

The animation, as you would come to expect coming from producers Phil Lord and Chris Miller, is really impressive, particularly in its use of mixed animation techniques, but first time co-directors and writers Jeff Rowe and Michael Rianda have produced something that doesn’t match up to the creativity of Lord and Millers foray into the LEGO universe, for instance.

And although, much like the family dog featured, it’s full of energy, it truly overstays its welcome, by being almost half an hour longer than it really should be, making it somewhat of a disappointing drag.

You only have to see the videos released by Boston Dynamics to understand that robots will destroy all humans, it’s just a matter of when not if, and that there was a greater opportunity here to explore our eventual demise, in a quirky animated form.

Unfortunately for the film, the Mitchells simply can’t compete with the likes of The Simpsons in terms of personality, as it's a real struggle to create any kind of emotional connection to them. So much so that don’t be surprised if you find yourself routing for the other side, because if an animated family needed to be wiped out by robots, it couldn’t happen to a ‘nicer’ family than the Mitchells.