It’s not that difficult to understand why people join cults. They appear to be places where you don’t have to think for yourself too much, with everyone given specific roles. Someone is charged with cooking, someone else with cleaning duties, and maybe another staying on top of the strength of the Wi-Fi and guarding the password. There’s also no hassle with parcels being left elsewhere as there’s always someone knocking about, as well as enough people to volunteer for babysitting duties when you need a break from the whole cult thing.

In ever-increasingly complicated times then, a cult can streamline living into a more convenient existence.

Obviously there may be the odd job that you may have a few misgivings over, like the sacrifice of the occasional virgin perhaps, or the torture of the unwelcome visitor or three, but let’s face it, no system is perfect.

For her latest feature, Polish director Malgorzata Szumowska presents an insight into rural cult life with a membership that, initially at least, are more than happy to buy into the philosophy presented to them. 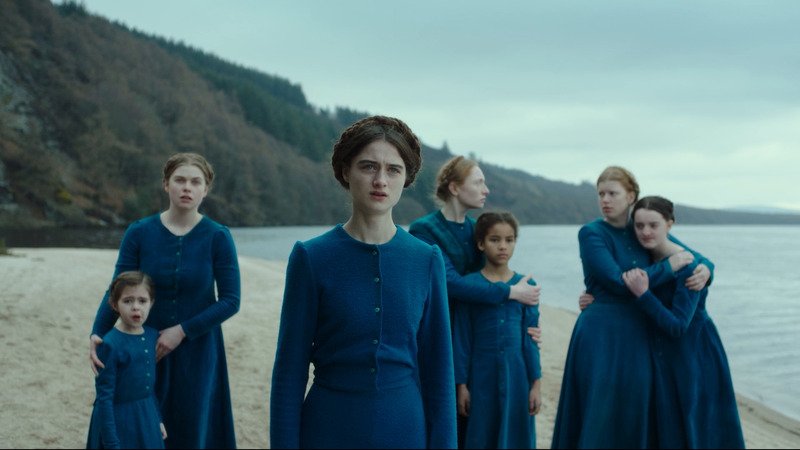 But why are you goiong on about blessing fruit to us?!

Far, far away from the modern world, living in the woods, is Selah (Raffey Cassidy). She is a young woman who is part of a feminine ‘flock’, who all answer to the man known as the ‘Shepherd’.

They live a very simple life, each with their own roles, who help keep their small but perfectly formed community going.

Selah is part of the younger generation, with her mother being a fond and much loved member of the community, who is no longer with them.

After a visit from the local police, Shepherd informs the group that they will all have to move if they’re to survive. So they begin their journey through the countryside, looking for a new home, but it’s a journey that leads Selah at least, to a greater understanding as to what is really happening in the group.

So, I want to bring up the issue about the bleach in our recent clothes wash...

During the early parts of this film, all it does is reaffirm that cults really aren’t that bad. Everyone appears to be happy to be there, and enjoy the chores they have, including raising the children within the community. The only real question that pops up is, why the need for it to be run by a man? Sure Shepherd is handsome in a wonky Jesus way, but apart from the occasional religious-type saying, he doesn’t come across as particularly useful. Which begs the question, why do a bunch of well-organised women need him?

The most obvious answer is his seed. It appears that Shepherd has been a busy bee on the procreation front, being the only male in the community. And although it’s clearly an all-female cult, the film doesn’t go into what happens to the baby boys that are born.

The fact that all the women, dressed in outfits of solid colours like a uniform, are subservient to the male of the species, makes this film eerily resemble the origins story of The Handmaid’s Tale, so much so that you half expect them to greet each other with “blessed be the fruit”.

Cassidy is magnetic throughout as the wide-eyed youngster Selah, who slowly but surely starts to think for herself, and questions if this is the best life for her and her community.

Szumowska’s film, shot in Ireland, is both haunting and atmospheric, and with its slower pace it’s also strangely hypnotic. Much of this is down to some truly beautiful cinematography, which captures both the eerie space and mood of the piece magnificently.

The chances are you’ll come away from the whole experience feeling one of two things: either that cults don’t necessarily have to be bad things, or, an all female society might just be worth a shot, as it couldn’t be worse than our current scenario.

Either way, The Other Lamb is a sublime effort that’s definitely food for thought.