Even at the top of their game, many actors end up revering others in their field, known as actors’ actors.

These types often come from a theatrical background, with most notable examples being Laurence Olivier and more recent thesps such as Ian McKellen and Judi Dench.

And although he doesn’t quite have the same kind of worldwide profile, British actor Mark Rylance is certainly another name on that list. Although he has honed his craft on stage, being rewarded with three Tonys and Two Olivier awards, his three BAFTAs and Oscar (for Best Supporting Actor in 2015’s Bridge of Spies) prove he’s no slouch on both the small and big screen.

His latest role sort of crosses both worlds of stage and screen, as it feels like a filmed play. 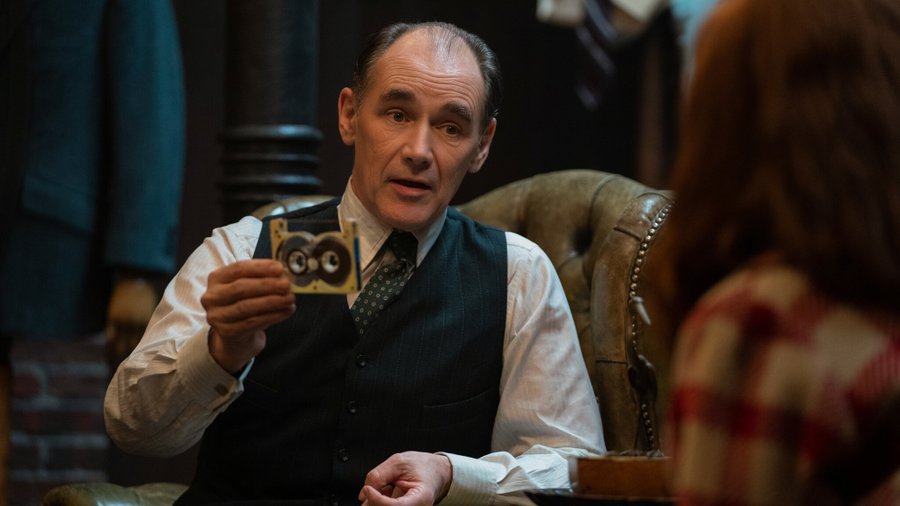 Having honed his craft as a cutter in the world famous Savile Row in London, Leonard (Rylance) decides to make a fresh start and open up a tailor shop in Chicago.

As the year is 1956, he soon finds that many of his clientele are members of the mob, who like the cut of his bespoke suits, and decide that his quiet establishment would be ideal as a stash house for some of their not-so-legal activities, which Leonard agrees to.

But Leonard soon finds that his little shop becomes more involved in the mobs activities than he would like, putting his life and that of his receptionist Mabel (Zoey Deutch) in serious danger.

I don't get it, you keep saying "Suits you, sir" over and over?!

With an Oscar under his belt for writing 2014’s The Imitation Game, Graham Moore makes his directorial debut with this feature, which he also co-wrote with Johnathan McCain.

Maybe as a result of our current times, this film has an intimate, stage-to-screen feel, as the whole thing takes place entirely within the confines of the shop. This certainly must have made it easier to shoot, with no exterior shots of Chicago necessary, allowing for it to be shot in a smallish studio in Wembley Park in North West London that would certainly struggle doubling as Chicago during any period in history. It also explains the large British cast, who know doubt had fun exploring their American accents.

The intimacy of the script also builds on a tense sensation of claustrophobia that grows throughout the film, as the scenario unfolds.

As expected, Rylance is exceptional, delivering a character who certainly has a surprise or two up his bespoke sleeve. No doubt he felt right at a home with a story that could easily be produced on stage, allowing the focus to be entirely on the cast within its small locale.

It is a film that slowly draws you in, before unloading a number of clever twists and turns to keep the audience on its toes, which it does admirably.

Perhaps just as there are actors’ actors, then The Outfit could be considered the perfect actor’s film, allowing as it does for its cast to fully take centre stage.

The Outfit is an absorbing and thrilling little film that allows Rylance to bring some of that intensity and gravitas that he so often does on stage, to the screen, making it the perfect fit for his considerable talents.