When we caught wind of the fact that The Surge 2 was about to be released, it suddenly dawned on us that we hadn’t played the original. So with a mix of journalistic thoroughness and curiosity, we downloaded it.

With the initial premise sounding quite intriguing, and the idea of fighting in an upgradeable exoskeleton, it all added up to a title that really shouldn’t have passed us by. And then we played it – albeit briefly – and understood how it did.

The original came close to being one of the most infuriating games we had played in years, but these issues were bound to be addressed in any sequel, surely? 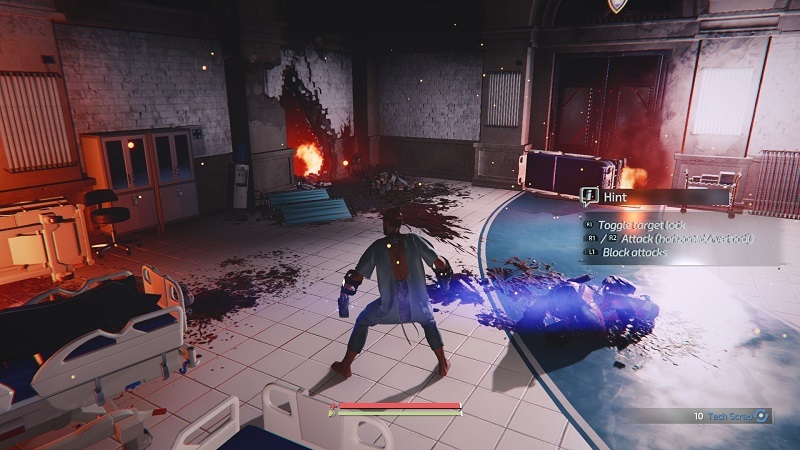 Wow, this party got outta hand - she was only supposed to have three of her friends 'round.

The game sees you stir from a coma, in the medical bay of a prison, where you have been enhanced using the latest tech. The prison appears to have some issues however, as inmates are now running around on the loose. Your immediate goal is to escape your surroundings, and step outside onto the streets of Jericho City, which are now somewhat lawless. With everyone out to get you, it is in your interest to upgrade your tech and take on a city in turmoil.

Stepping out of the medical bay was a familiar feeling; it was made more so the first time we died. As with the original, the developers Deck13 Interactive have decided to stick with the mechanic whereby once you die, all the minor enemies you had defeated before, miraculously come back to life. From a narrative standpoint, this makes no sense whatsoever, and from a gamer’s perspective, it’s just damn annoying. It’s the gaming equivalent of Groundhog Day, but without the laughs and Bill Murray.

After playing the original for an hour or so, it got the better of us and we gave up. And sadly, despite persevering a little longer with its sequel, we had to once again wave the white flag.

It nearly happened coming face to face with the first of a mini-boss battle in the prison. He didn’t look that mean, and we had picked up a tasty looking weapon which should have helped. It didn’t. After dying so many times, over the space of an hour, we were desperately close to calling it a day. Not only were we frustrated because we had no idea how to bring him down, more importantly, it just wasn’t feeling fun doing it.

Remarkably, through no skill of our own, we succeeded. It was like defeating a major boss in Zelda, except this was just a low level prison guard. Thinking it a corner turned, mustering up some new-found enthusiasm, we pledged to escape the prison, which we did. Once outside, our first impression of Jericho was...meh. Considering its claims of being a futuristic metropolis, it all looked rather dated, graphically at least. 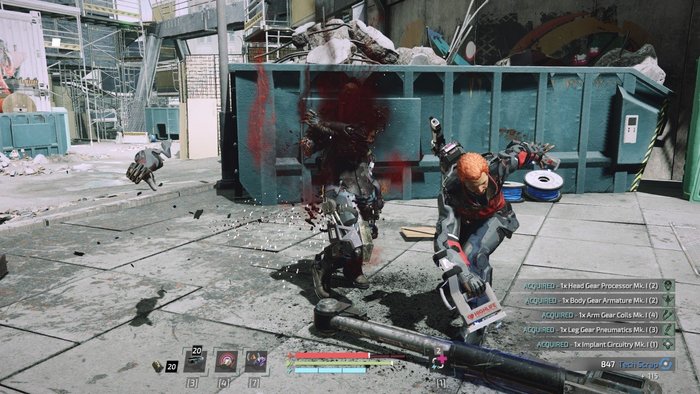 Once on the streets, we were attacked by a number of enemies, where, at different stages, we found ourselves slain, which prompted a swift exit, game stage left.

It wasn’t just that the game was wholly infuriating, it was also the fact that, like its predecessor, it lacked any real personality. The main protagonist is as dull as can be, but could possibly be out-dulled by the supporting characters.

It’s also a game of loops. The way to upgrade your tech is to defeat enemies. You then have to take it to a medical bay to bank the tech you’ve salvaged. If you happen to get defeated by an enemy, your current salvage is dropped, and you have a time limit to retrieve it from the place you dropped it, invariably by an enemy who defeated you.

Clearly we were playing the game wrong, so insecure about losing the current salvage, making runs back to the bay to bank them; but in doing so, resets all the enemies thus far and...so it bloody begins again.

We would strongly suggest then, that if you’re a casual gamer, this one might not be for you. It certainly wasn’t for us.

But that overriding frustration aside, the character’s movements felt clunky, and the environs just plain ugly. If there was a memo about attempting to push the boundaries of the capabilities of the current gen of consoles, Deck13 Interactive clearly didn’t get it.

There is, without a doubt, a playable game in this mess somewhere (the idea of targeting specific body parts to attack was a nice touch, albeit not terribly well executed as it’s easy to jolt the thumbstick during battle to another part with stronger defences), that hardcore gamers might well jump on board for a thoroughly challenging experience, but both the concept and execution just feel like they belong on a console from a previous generation.

It’s certainly is a title that we would recommend demo-ing any which way you can before purchasing, as it’s likely to be an acquired taste.

If there’s the possibility of a further Surge, on this evidence, we’ll be steering well clear of it.