Someone in Hollywood must really hate Sam Worthington. Initially at least, starring in James Cameron’s Avatar must have seemed a dream job. However, Not only did he end up looking like a human Smurf, he has to do so again at least four more times for the subsequent sequels that are sadly on their way.

Oh no, this film is worse than i ever imagined.

It’s the not so distant future (2048 to be precise) and scientists have come to the conclusion that we’ve royally buggered up the planet to the point of no return. So after some head scratching they come up with the following conclusion: the only thing left to do is to colonise another planet and bugger that one up too.

The main contender they come up with as being anywhere near a viable option is Titan, the largest moon of Saturn. Although similar to Earth, it doesn’t have anywhere near the same amount of oxygen. The workaround scientists come up with is to re-engineer the human genetic make-up, so that with a few tweaks, this new breed of super-human will be able to survive on this new planet.

Signed up for the experience is soldier Rick Janssen (Worthington), who, along with other military types, decides that being a guinea pig to determine the future of mankind – of sorts – is worth all the necessary risks.

Someone not wholly convinced is his wife Abi (Taylor Schilling), who isn’t convinced by the science of it all. And as the tests get underway, she may have a point, as the transition from human to super-human isn’t as smooth as first hoped, as test subjects begin to show worrying results from the treatment. 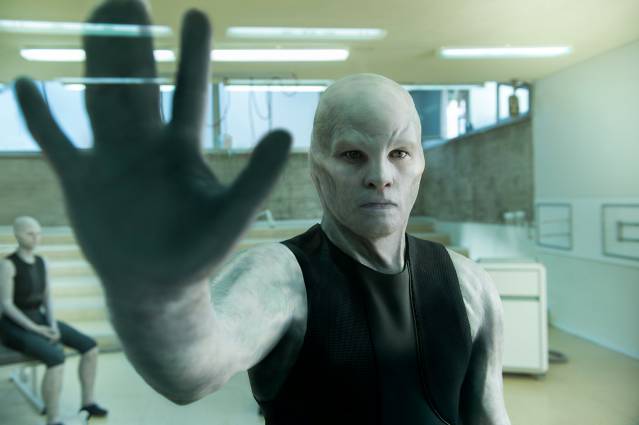 I'm starting to think i've taken the whole alien thing as far as i can now.

The Titan is one of a slew of recent titles from streaming sites and the like that are simultaneously releasing titles both online and in cinemas. And just like those that have gone before it, The Titan is further example of why they shouldn’t bother, as there just doesn’t seem to be any quality control whatsoever.

It’s not that enough money hasn’t necessarily been thrown at it, as it appears fairly impressive and looks good on a big screen. It also has a solid cast, including Worthing and Schilling, as well as the always reliable Tom Wilkinson.

Where it clearly suffers is in a weak script. Despite an interesting premise, it’s executed with a terminal amount of dullness. Characters are barely two-dimensional, with far too much relying on the central relationship between Worthington and Schilling, who sadly have the chemistry of two tubs of lard.

Director Lennart Ruff, making his full feature debut, has done a remarkable job in turning what should have been an entertaining tale of venturing into space, into a bland and mundane affair. The story has no high notes, and what’s more, neither do any of the performances. If this is the most exciting thing about going off to a moon of Saturn’s, we’re all better off staying put to watch the death of society, which must surely be a more entertaining experience. So if Elon Musk offers you a seat on his SpaceX programme, if this is anything to go by, just say no.

And as far as Sam Worthington is concerned, he should possibly stay clear from being an alien for a while as it really doesn’t appear to suit him.