There are very few Scottish actors who go on to become megastars; there is Sean Connery, of course, and that’s about it. And no, Mel Gibson in Braveheart doesn’t count.

Coming up from the rear, as it were, are the two big Macs – McAvoy and McGregor – but the one Scot in recent years who consistently has their name in lights on the marquee is Gerard Butler.

Ever since his numbers gig for Zack Snyder in 2006 (300), Gerard has been enjoying the life of a Hollywood leading man.

Now maybe it’s the fact that he’s becoming somewhat of a sequels whore (a second Den of Thieves has just been announced, and the umpteenth Olympus flick, entitled Angel Has Fallen is on its way), that has lead dear old Butler back to his homeland roots for something far less Hollywood altogether. Remember the rules boys, we're not allowed to kill any of the paparazzi...

It’s time for the handover of staff of a lighthouse, which lays, rather remotely, North West off the coast of Scotland, on the Flannan Isles.

Three men, Thomas (Peter Mullan), James (Gerard Butler) and Donald (Connor Swindells) are set to stay on the island for six weeks, maintaining the lighthouse and keeping it running when it’s needed. Other than the dog that lives there, they are the only inhabitants, so are going to have to get on with one another, whether they like it or not.

All is going well until one day, young Donald discovers a rowing boat, a wooden chest and a body washed up against the rocks of the isle. With this one event, the trio soon find a dramatic change in climate between them on the island that deeply affects them all. 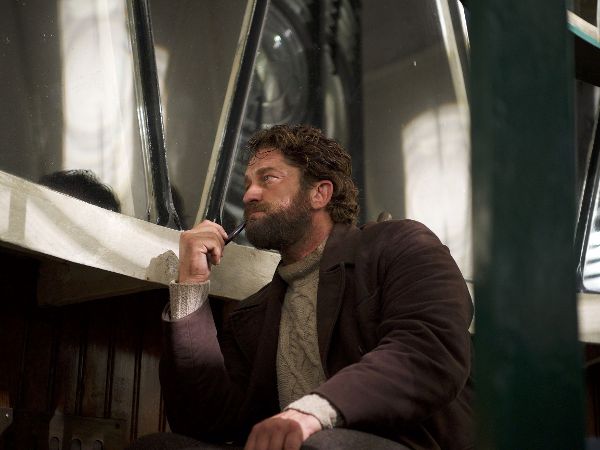 Hmmm, I wonder if Kodak Has Fallen would work?...

It’s not just the remote Scottish locale that must have been a draw for Butler, but the opportunity to work with Mullan; he may not be a global star like Butler, but he is, without doubt one of the most intense and absorbing actors ever to appear on screen.

It’s no bad thing that it’s also a cracking script, somewhat unnervingly, based on real life events. It takes its time to build up the drama, but when it arrives it swiftly becomes a gripping, tense affair.

It may be based on a Scottish island, but it certainly has a Nordic-noir feel about it throughout, and it’s not just Butler’s cable-knit jumper. It makes more sense when you know that standing at its helm is Kristoffer Nyholm, who directed a fair few episodes of The Killing. He spins the intrigue out with a true hand, whilst maintaining a veritable atmospheric chill in the air.

Butler and Swindells - making his big screen debut here – do remarkably well to keep up with Mullan, who once again dominates every scene he’s in. To their credit, they’re just happy to be in his wake, because when he’s on it, as he is here, he’s an unstoppable force of nature.

Sadly The Vanishing won’t get the same kind of attention that Butler’s bigger films get, and yet it’s one of his more accomplished films in recent years. It’s a superb, brooding thriller, and if you’re of a delicate persuasion, best viewed with the big light on.