The Vast of Night

It’s quite remarkable how quickly the media landscape has changed in recent years. Not only have streaming sites become the norm, but they’re huge popularity has led to them producing their own features.

Take Amazon Prime Video; its features section, Amazon Studios, has only been around for the last ten years, but in that time, it’s already released over 55 films, including Manchester by the Sea, The Big Sick and You Were Never Really Here. This atmospheric indie flick is their latest addition.

I wonder if they know I can hear them peeing upstairs?

It’s a big night for the small town of Cayuga, as it’s the first game of the high school’s basketball season. Most of the town are there, including Everett (Jake Horowitz) who’s soaking up the atmosphere before he goes on air as the local DJ for WOTW.

He bumps into Fay (Sierra McCormick) there, someone who shares his passion for audio, having just purchased her very first tape recorder. He gives her a lift to her work, where she operates the town’s telephone exchange, but she catches up with him later when she puts through the callers to Everett’s show.

It’s during work that she notices a lot of weird things happening, with lots of calls just cutting off. She then hears a peculiar noise on the line, the likes of which she’s never heard before. So curious about it, she confers with Everett as she also heard during his show, who happens to have a recording of it, and he agrees that’s something’s not quite right.

As the pair dig a little deeper into the mystery, they soon realise that all these strange incidences occurring that very night, are far from coincidences. 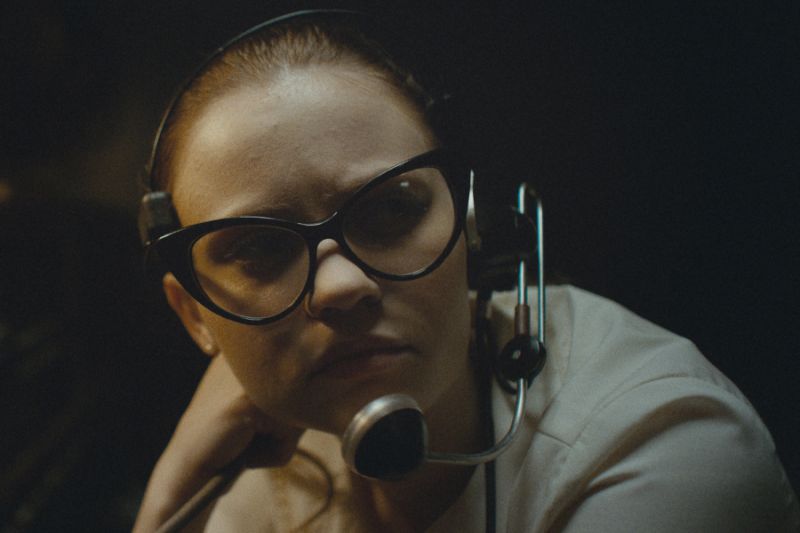 The reaction to the latest retro bluetooth headset was less than enthusiastic.

The Vast of Night is one of those rare titles that, if you go into it cold knowing nothing about it, it will knock you for the proverbial six. It has to be one of the most original and engrossing features in years. What makes it even more remarkable is that it marks the directorial debut for Andrew Patterson.

Patterson’s film, set in the fifties, is an affectionate homage to a number of things. Firstly, it takes on the appearance of a show within a show, as the story plays out on TV, on the show Paradox Theater, which is a knowing wink to The Twilight Zone. The story itself is a pleasing mix of the atmosphere of Orson Welles’ 1938 radio adaptation of The War of the Worlds, subtly blended with Spielberg’s Close Encounters of the Third Kind. The result is a thoroughly absorbing tale into the unknown, all taking place on one night.

And although it’s relatively short at around 90 minutes long, it sure packs in a lot of dialogue. Thankfully, much of it is highly entertaining, and beautifully delivered by its two young leads, Horowitz and Sierra McCormick, who are both simply brilliant.

There is also a little bit of Welles in the direction of the film too; Patterson is both bold and brave in his direction, and isn’t afraid to take risks, like exposing the audience to a number of scenes that take place in total darkness, forcing them to listen intently, much like Welles did with his radio play. But he also plays around with other techniques throughout too, again like Welles did with his directorial debut in 1941 Citizen Kane, which worked out pretty well for him. There are long tracking shots, particularly at the beginning, where the audience is forced to follow behind characters and eavesdrop on their playful conversations. And other times, the camera rests, in one position, on one character, as the dialogue slowly flows.

It’s safe to say that Patterson is quite the character himself, having co-written the script, produced and edited the feature, yet using pseudonyms in both instances (writer/producer as James Montague, and editor as Junius Tully) for screen credits. But when you can shoot a film in under a month for a total of $700,000, he should have had an alias of Jesus Christ for the miracle he’s pulled off.

The Vast of Night although faintly familiar in theme, is wholly original in its execution. Patterson (if indeed that is his real name), has produced a stunning debut, full of humour, warmth and suspense.

There’s only one thing scarier than the film’s finale, and that’s what Patterson can achieve with deeper pockets and greater resources at his disposal in the future, with all the exciting possibilities a new dawn can bring.