The Woman in the Window

There’s a fine line between playing homage to a classic and simply ripping it off, and this latest thriller from Netflix teeters dangerously close to the later.

It’s ironic then that it comes from a novel by A.J. Finn, which happens to be a pen name for former book editor Daniel Mallory, who has form in making stuff up, but more so in real life than on the page; a journalist accused him of lying about having cancer and a brain tumour, for example.

This makes for a curious watch then, as Amy Adams channels James Stewart, staring out as she does from your apartment window in this all too familiar thriller. 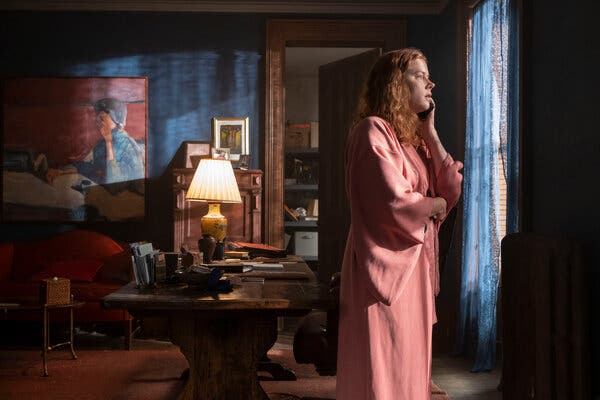 Despite living in the hustle and bustle of NYC, Anna (Adams) doesn’t get out much. Not because she doesn’t want to, but because she can’t, suffering from agoraphobia as she does.

This leads to her becoming fascinated with the outside world through her window, specifically the comings and goings of her neighbours opposite. So when a new family move in opposite – the Russells – Anna takes particular interest in their behaviour.

This is magnified when she gets a visit from 15-year-old Ethan Russell (Fred Hechinger), who brings her a gift, who also appears to be just as fascinated with Anna as she is with them.

When she starts to see inappropriate behaviour from his father Alistair (Gary Oldman), she finds herself focusing on them all the more. This leads to her witnessing a heinous crime, or so she thinks, but when she reports it the police struggle to believe her, especially when there’s no dead body to collaborate her story. But despite her mental frailties, Anna is convinced by what she saw, and is compelled to discover the truth about what exactly is happening across the street from her. 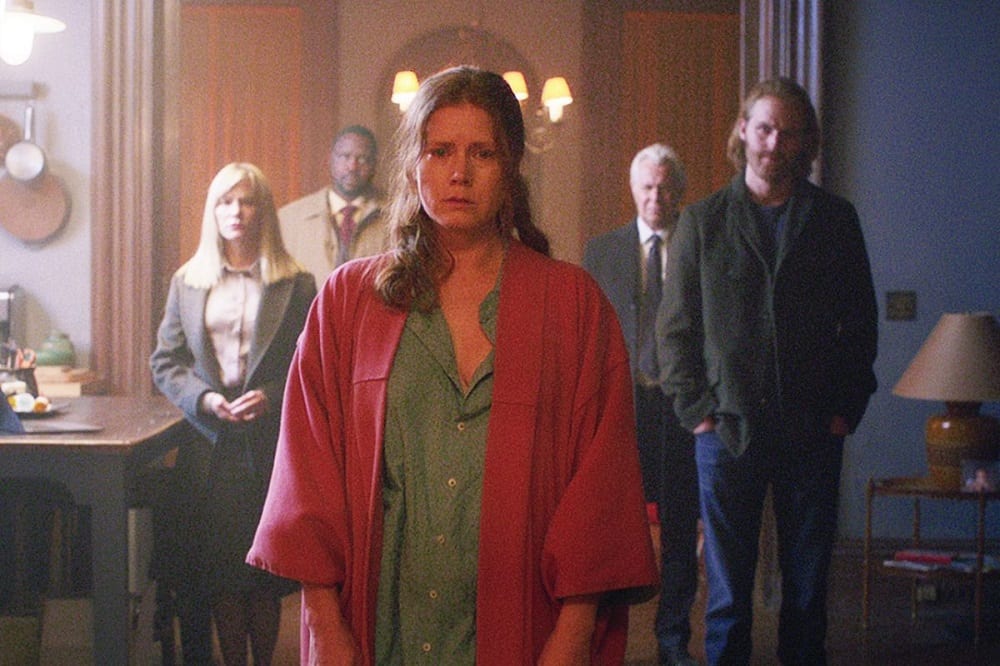 Don't take it personally Amy, but we will have to banish you to the other world...

It’s guaranteed that it will be difficult to find a review for this feature that doesn’t contain the following two words: ‘rear’ and ‘window’. As far as a premise goes, this is a carbon copy of Hitchcock’s 1954 classic, with the only difference being that instead of being physically crippled, as Stewart is with a leg in plaster in his apartment, Anna is mentally disabled, with the inability to get past her front door.

British director Joe Wright doesn’t hide this blatant homage to Hitchcock in general, and Rear Window specifically, with some retro cinematography, with stairs specifically a regular motif, and a score by Danny Elfman that must have had him playing the best of Bernard Herrmann on repeat until it seeped into his creative consciousness.

And it works well, for the first half at least, as Wright puts together an aesthetically pleasing thriller to days gone by, acting as a stylish doppelganger tribute to Hitchcock and his work.

It’s surprising then how quickly a film that has very little in the way of originality, certainly where its story is concerned, can quickly lose its way.

Wright’s direction gets increasingly ploddy, as he attempts to create a third act that can stand on its own two legs, but like the two protagonists in both this and Rear Window, it soon becomes clear that the story too has mobility issues, as it painfully struggles to make it to film’s conclusion in one piece.

It’s certainly no secret that film suffered in production, with re-shoots ordered after Wright’s initial cut struggled to make sense to test audiences, but that’s a regular phenomenon in Hollywood today, and can’t be held as the root of the problem, although it certainly doesn’t help.

What would have helped for sure is a tighter script; although the film is not long physically, coming in as it does at a reasonable hour and forty minutes, much like some of Anna’s unwanted visitors, the film still manages to linger around until it starts to feel uncomfortable and therefore could have done with at least a ten minute trim.

And even though A.J. Finn’s source material may have been the ‘inspiration’ – although clearly not for Wright – whatever issues there were at script stage should have been resolved considering Tracy Letts wrote the script, and Wright, whose previous work includes Pride & Prejudice, Atonement, Anna Karenina, as well as 2017’s Oscar-winning Darkest Hour, certainly have the creative know-how to bring classic stories to the screen.

Adams still manages to give a good account of herself as a woman mentally crumbling, as do the rest of the cast including Gary Oldman, Julianne Moore as well as a credible turn by young Hechinger, but by the film’s end, they’re all fighting an uphill battle, with the window becoming increasingly smeared as time goes on.

If you want to see a film about someone trapped in their apartment who gets obsessed with their neighbours, then Rear Window is still the film to see. As ‘homages’ go however, Wright’s film is an interesting experiment, but nothing more.