Films based on comic books appear to be the latest cash cow trend in cinema. Its a shame then that recent super-heroic outings have been less than super. And yes Iron Man, the finger of disappointment is being waved in front of your stupid masked face.

But as well as churning out mediocre sequels, production companies are also turning to some less familiar comic book heroes for success. Despite the likes of Captain America and The Avengers  both of whom are having their own features released shortly  having a legion of glass-rimmed fans, it will be interesting to see how mainstream audiences react to their adventures. A possible litmus test to their reaction could be in the bulky shape of Kenneth Branaghs Thor.

Ruling the realm of Asgard is elderly king Odin (Anthony Hopkins). It hasnt been easy though as the Frost Giants have been knocking on his kingdoms door for some time. The Giants would like nothing better than to bring eternal darkness to Asgard. Someone who vows to stop them at any cost is Thor (Chris Hemsworth), son of Odin. Although the sentiment is right, Thor can be a tad hot-headed for Odins liking. So much so that after a little spat Thor and his chums have with the frosties, Odin banishes Thor to one of the furthest realms of Asgard  Earth.

Thor lands in New Mexico, and it doesnt take him long to realise that his old man has also stripped him of all his powers. A bunch of scientists, lead by Jane Foster (Natalie Portman) inadvertently bump into him and decide to look after him for a bit.

Meanwhile, back in Asgard, Thors brother Loki (Tom Hiddleston) is up to no good at all. Hes been carrying a grudge since he was a boy that Thor was to be next in line for the royal throne. But with Thor out of the picture, Loki decides that the royal title is his for the taking. With Thors friends still watching, they decide to track down Thor and give him the lowdown. And thus a mighty storm brews between the two worlds. 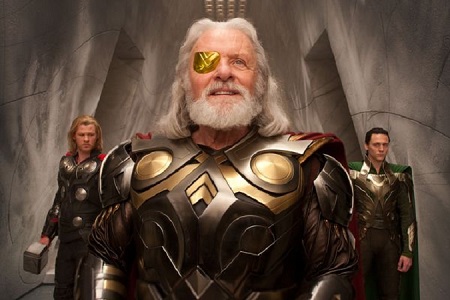 Ah look at me, I'm Anthony Hopkins 2.0. Nothing will stop me now from taking over the world boyo!

Considering that the Marvel character Thor might not make it onto the average Joes top five favourite superhero list, this cinematic outing for the God of Thunder is certainly a pleasing one.

Probably what works in its favour the most is the lack of any back story. Many of the more recent comic flicks have been too bogged down in retelling how that particular hero got their powers. Not so here. Audiences are thrown into the peculiar world of Asgard, ready or not. Its this cracking pace from the off that gives this film its edge over other superhero fare. Its not necessary to labour over the hows and wherefores of Thors character; he does what he does, and does it pretty well.

The biggest surprise for this film however must be its director. Kenneth Branagh has hardly got a slew of action films on his CV, and wouldnt necessarily be seen as the go to guy to direct a summer blockbuster, and yet he does a terrific job. The key to his success here maybe down to his masterly knowledge of characters and stories. After all, at the heart of Thor are some very Shakespeare-esque story arcs. Its about family; relationships between siblings; and in turn, their relationships with their father. Wrap it up in some rather lush CGI and youve got a nice little hammer of a hit on your hands.

Its the films focus on narrative and character that makes it so appealing. Not only that, its also reminiscent of the original Superman film in both style and content. Yes it can do the super-duper stuff, but it also has a nice line in relationships. Thors relationship with Jane Foster for instance, is similar to that between Superman and Lois.

And despite the Asgard gang being all rather on the serious side, the film has many moments of light relief. Hemsworth may not be quite as bulky as you might expect Thor to be, but hes certainly weighed down with charm. Lets just hope he manages to clear his diary, as it appears that playing Thor could keep him busy for a while; not only has a sequel already been announced, but theres also the characters participation in what many are hoping to be the mother of all superhero films, in next years The Avengers.

In anyone elses hands, this could have been yet another run-of-the-mill comic adaptation. With Branagh behind the camera however, hes not only given Thor the necessary gravitas, hes given it heart.

With potential blockbuster titles looking very thin on the ground in the coming months ahead, Thor and his mighty hammer could possibly provide the biggest hit of the Summer.