It must be really frustrating working for Martin McDonagh. On the one hand, he is extremely loyal, with many of his actors appearing in a number of his features. The downside is however, the talented British director has only made three in the last ten years – 2008’s In Bruges, 2012’s Seven Psychopaths and now this.

It wouldn’t be so bad if he was mediocre, but as a writer and director, very few in Hollywood can come close to his ability to tell a great story, well, usually with a huge helping of delicious quirk on the side.

The upside of course is that you’re bound to get noticed – and no doubt rewarded - and this film is certainly getting quite the buzz. 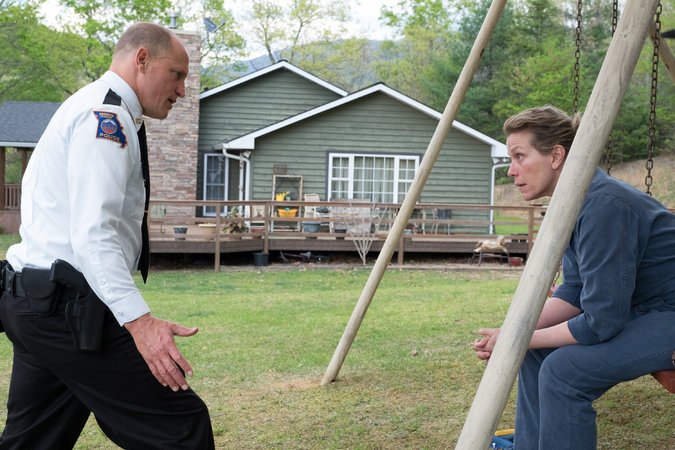 Listen Fran, you've been on that swing ages now, it's my turn.

Although often depicted as quiet and quaint places to live, bad things can also happen in small town America. A young woman is raped and murdered in Ebbing, Missouri, and despite the efforts of the local police, the culprit was never found. As you would expect, her mother Mildred (Frances McDormand) is still outraged by the fact that her daughter’s attacker has still not been brought to justice.

Instead of just letting it lie, Mildred decides to rent three billboards just outside of town, nestled on a quiet road, to question the authorities in general, and more specifically the police chief in charge, Willoughby (Woody Harrelson).

Despite being in a fairly remote area, the signage causes quite a stir in the community, particularly rubbing both Willoughby and his loyal officer Dixon (Sam Rockwell) up the wrong way. Events soon after, snowball out of control, and little old Ebbing is quiet and quaint no more.

You call that tread?! This is tread my friend!

There are certain events that although rare, are quite spectacular when they happen. Solar eclipses, for instance, or Arsenal winning anything significant. Three Billboards Outside Ebbing, Missouri can be added to that list.

McDonagh’s script is one of the most absorbing and entertaining stories to be told in years. It leads you down a path where there is absolutely no chance of second guessing what’s around the corner, and loving every minute of the uncertainty that follows. Normally that’s all you can ask from a film, but this one delivers more.

It’s probably this incredible script that ensures that every member of the cast bring nothing other than their A game. Although McDormand has proven herself time and again to be someone who knows what’s she’s doing, she manages to raise the bar even higher here with this stunning performance. And she’s not the only one. Nearly every member of the cast accepts the challenge – with both Harrelson and Rockwell in particular – bringing that little extra to the party.

Again McDonagh should be given a large pat on the back, for not only crafting a modern masterpiece, but once again bringing such quirky and entertaining characters to the screen.

The director already has an Oscar, which he won for his short Six Shooter in 2004, but the film’s success at the Golden Globes is bound to continue, with a handful of statues virtually guaranteed.

Three Billboards Outside Ebbing, Missouri is that rare film, where the writing and the acting just seamlessly come together, creating a joyous, albeit off kilter classic, that should be at the top of everyone’s ‘must-see’ lists this year.