by The Ting Tings

You know a band are capable of catchy tunes, when the majority of their tracks are used for everything - from advertising an assortment of guff on a TV ad, to being the bed music on a trailer for an über cool show on E4. 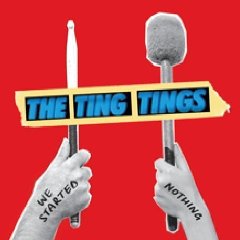 Yes, The Ting Tings have made it, with their debut album no less.

The obvious downside of this, is that folk can soon get sick to death of your catchy poptasticness. Look at Moby. If you can find him.

This Manchester duo may just avoid that kind of fate however, due to one simple fact. Their songs are qualified ninjas  each one versed in the art of the friendly assault of your ear drums. The drums, the drums, the drums... you see? Its all highly infectious stuff, like an awkward teen sporting a verruca in the deep end of a public pool during the school holidays.

Fruit Machine has a sweet bubblegum quality  bubblicious(TM) even  all shiny and poppy to the max. If Shampoo were ever to reform (God forbid), it would be the perfect track for them.

After the intro for Be The One, you could easily be mistaken for thinking that Lauren Laverne had decided that being opinionated and cultured and all that was not for her, deciding instead to breathe life back into Kenickie once again. The only real curiosity on the album is Traffic Light; a whimsical little number that has singer Katie White coming all over Eddie Reader/Fairground Attraction-like. As the only bum track here, its still not bad enough to skip to the next track for.

With a tour de force of singles under their trendy belt, the rest of the album is an upbeat platter of delights. Dont believe a word they say, The Ting Tings have definitely started something.