French director Julia Ducournau has previous when it comes to the macabre, with her 2016 directorial debut Raw, a film that followed a young woman who had the taste for human flesh.

Some might say a hard act to follow, but the director returns, with a film she also wrote, with quite possibly the most disturbing film of the year. 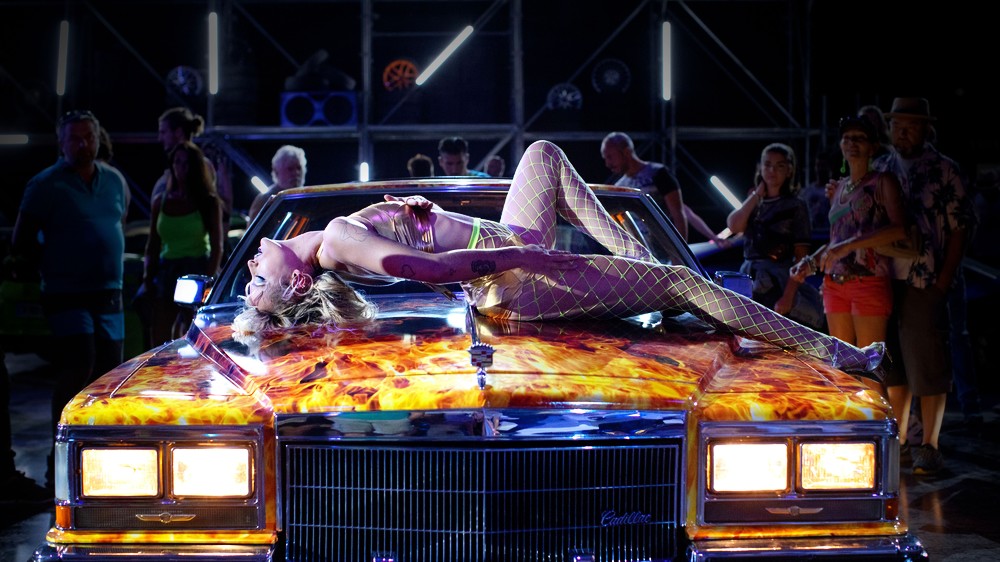 Oh yes believe, it, this car is very much hydro-matic.

But being good has its drawbacks, as only Alexia knows, with fans wanting autographs and selfies. Late one night, one fan takes it too far, and Alexia finds that she has to teach him a lesson. It’s a lesson that she discovers enjoying, so repeats it a number of times, much to the horror of those who encounter her.

With her deeds not going unnoticed, she decides she has to lay low, and believes the perfect way is to adopt the persona of a young man who has been missing a number of years since he was a boy. It’s the perfect disguise, or so she thinks, until his father shows up, obviously very keen to be re-united with his son once again.

It’s a scenario that could easily backfire, but even she wasn’t prepared for the powerful draw of family.

It would be perfectly fine if it was a proper beard, but sadly it's just bum fluff.

Initially at least, Ducournau’s second feature has the feeling somewhat of a video nasty about it, with its graphic use of violence and nudity. For nearly half of it, it could almost be described as Showgirls meets Duel, where it brings new meaning to the term auto erotica.

There is a definite gear shift for the second half however; leaving the mechanics of the violence and vehicles on hold, it explores something far more organic, such as loss and the grieving process, as well as the bond between child and parent. It’s a bond that Alexia – now going by the name Adrien – failed to have with her father, so the relationship she starts with Vincent (Vincent Lindon), is all completely new to her.

It’s a bold film, which certainly has its merits, but doesn’t quite gel in the same way as her debut. To begin with, the two very distinct halves don’t really work together, like trying to weld the back of a double decker bus to the front half of a Lamborghini. Looking at them as separate entities is fine, but as a whole doesn’t work.

Certainly the cinematography impresses, particularly with the director’s colour palette, with violent pink often seen, but overall the feature lacks finesse. You get the notion that Ducournau just came off of a marathon session of watching early David Lynch films before shooting, as it feels heavily influenced by the auteur’s work, although often to the film’s detriment.

There’s no denying that Titane is a piece of work impossible to ignore, but ultimately its ambition is its undoing.