As comedy double acts go, there aren’t many that can say they have had a career lasting over eighty years together, but that’s how long Tom and Jerry have been in each other’s animated pockets for.

The iconic cat and mouse were created by William Hanna and Joseph Barbera in 1940, with them making 114 shorts featuring the pair over the following 18 years in their original run.

Since then they’ve been on and off both the big screen and small, but this latest feature sees the duo starring in a big budget revival like never before.

So how come you guys are getting paid more than I am?!

When it comes to finding work in New York City, Kayla (Chloë Grace Moritz) has to be at her most creative, especially after recently being fired from her previous job. Using smarts and not qualifications, she manages to wangle a position in the prestigious Royal Gate Hotel, as they are hiring temporary staff for a big event they’re holding, that of a high profile wedding.

Despite not being qualified, Kayla can think quickly on her feet, and it looks like she can pull this new role off. Or it did until a certain mouse, Jerry, decides to move in and cause all kinds of chaos throughout the hotel. The situation is made worse when his rival, Tom the cat, discovers where he’s staying and makes it his mission to hunt him down and be rid of him, but sadly for Kayla, that only adds to the mayhem.

With the couple getting married in a couple of days, Kayla doesn’t have long to resolve the current rodent and feline problem in the hotel, and if she proves unsuccessful, she may well see herself back on the streets of NYC again. 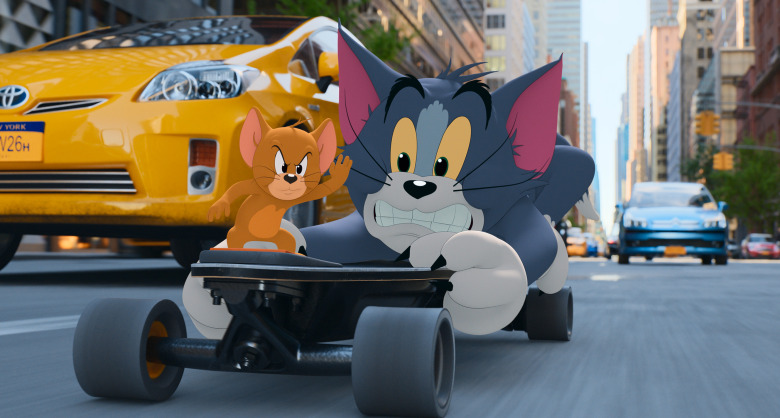 Just step on it, the sooner we get back to cartoon land, the quicker we can start denying this ever happened.

It’s certainly a testament to their legacy and longevity in animation that Tom and Jerry can still have some relevance to a modern audience. And it’s clear that director Tim Story is very mindful of that; although the film is live action, all the animals featured appeared in a 2D animated form, and so Tom and Jerry appear in a very traditional form, with their appearance thankfully untinkered with for the most part.

And although they, are in 2D, as are all the other animal characters, their interaction with the real world works fairly well, although certainly not on the same scale of the classic Who Framed Roger Rabbit?.

Of course their relationship is based on physical abuse, which has seen Itchy and Scratchy from The Simpsons both parody and pay homage to on an extreme level. That slapstick dynamic still exists here, but it’s clearly not enough to sustain a full length feature. Setting the majority of the film in a hotel feels like a comparable spiritual home for the pair to play out their shtick, but the subplot of the wedding doesn’t quite fit; it’s difficult to see how its target audience, presumably the very young, accompanied by those old enough to have watched the original cartoons, relate to the woes of a rich couple in the process of getting hitched. The film obviously needed an anchor, but the wedding storyline doesn’t feel the right choice.

And when it comes to choices, you have to wonder about the cast, most notably Moritz and Michael Peña, choosing to sign up for these roles. You can’t help but feel that there was an air of desperation in regards to the involvement of both; it certainly wasn’t a career move, and what large amounts of cash they were both offered were hopefully worth it. It can be only hoped that their appearance in this film doesn’t have any negative impact on both these fine actors going forward. Although there’s a very real chance that it will. But sometimes jobbing actors can’t afford to be picky, clearly.

Luckily for its animated stars, they come out of it rather well; certainly Story has stayed true to their roots, even managing to keep them silent, for the most part, throughout, and thankfully ignored the opportunity to re-invent them, with a 2.0 version, for this generation.

The script also showed promise in the early stages, with a few cute quips at the expense of Warner Bros characters, but unfortunately it doesn’t build on that nearly enough.

Although their return is likely to trigger a fair amount of warm nostalgia, a full length feature does feel a step too far for the warring pair; a cartoon short is one thing, but a film lasting an hour and forty minutes with little in the way of momentum, makes it hard work for both Tom and Jerry and audiences alike.

With so much content now available for youngsters, it’s difficult to see the appeal these OAPs of the animated world might have for them, particularly when they’ve based their entire career on one premise, that cats and mice don’t get on, and spun it out continually for over eighty years.

Although kudos has to be given for keeping a traditional look to their animated form, more could have been done to make them, and the world they live in, more contemporary, because nostalgia will only draw in an older crowd so far before it becomes apparent that we’ve very much seen it all before, and that even for an athletic duo like Tom and Jerry, the jump from the small screen to a full length feature is a jump too far.