There's nothing like a nice, relaxing train journey. Good luck trying to get one mind, what with poor services, overcrowding and extortionate prices. And why does that person eating that stinking, greasy food always have to sit next to you? There's only one thing that would make an average train journey even worse, and that would be a zombie outbreak in the aisles...

Yes, South Korean director Yeon Sang-ho's film is a high concept film akin to Snakes on a Plane, except with zombies, on a train. It's brainless fun with the brain dead on board.

With his heavy work commitments as a fund's manager, Seok-woo (Yoo Gong) hasn't been the greatest dad to his young daughter Soo-an (Soo-an Kim) of late. He tries to make it up to her by buying her a games console for her birthday, only to find he bought the self same one last year as a present for her. 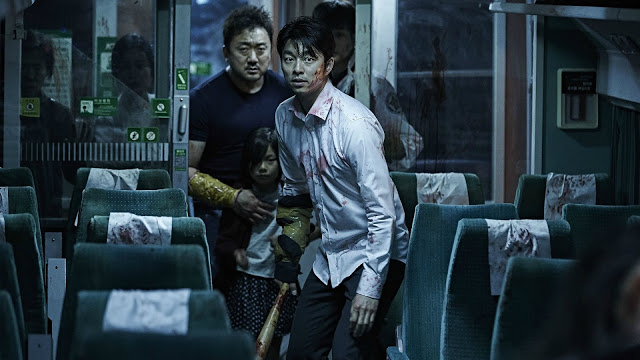 We'll show them for playing their music out loud on their phone.

What she wants, more than anything for her birthday, is to go to Busan and visit her mum. Considering what a shit he's been, he agrees to take her on the train.

Just as they set off from Seoul station, news comes in that riots are breaking out all over the place. It seems that there's something odd going on. This is illustrated further when a young woman collapses on the train and starts to roll about on the floor. When a guard attempts to help her, she gets attacked as the woman takes a chunk out of her neck. And so begins a zombie outbreak.

With the train a long way out of Busan, Seok-woo and a small group of passengers, have to do their best to survive the journey for as long as they can, but with the zombie population growing, it won't be an easy task. 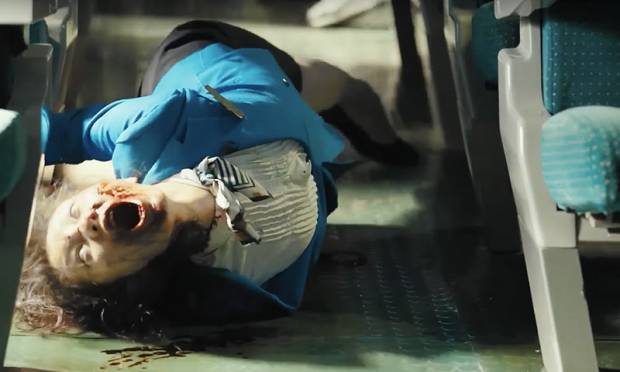 The three hour delay waiting outside Victoria Station took its toll on one stressed out passenger.

You just can't keep a good zombie film down, not even if you stick your foot through its face. There are of course a lot of bad zombie flicks that would be best for everyone if they did just hobble away into the distance without a fuss, but South Korea is producing some damn fine horror titles, and this is no exception.

With The Walking Dead still owning on TV, it's difficult to compete on that kind of cerebral brain-dead level. So this film doesn't. Instead, it breaks the agreed rules of the zombie genre and has fun with it. For starters, these zombies don't walk, they run. Fast. They're agile critters, that's for sure and are most definitely quick on their undead feet. And they have a touch of the ninja about them too - ninja zombies, what's not to love about that?

Director Yeon Sang-ho keeps the pacing fast and tight, and the action right on track throughout. The fact that most of the story is played out on board a train adds to the claustrophobic atmosphere, with the film's protagonists trying to outwit hordes of rampaging flesh-eating passengers.

It may seem like that the zombie flick is dying out, but Train to Busan does its best to put drooping flesh back on its infected bones. if you enjoy a zombie chomping down on a resistant victim, on a train no less, then this is just the ticket for you.