We have to admit to not being the biggest fans of games specifically available to download from Microsoft's X-Box Live Arcade, or Sony's SEN (or PSN as it was once known).

That's not to place a slur on the quality of the games available, it's just that meaty consoles just don't seem to be the appropriate platforms for bite-sized chunks of gaming. After all, isn't that what smart phones, tablets etc. are for?

This recent release however, proved too much of a draw to ignore.

On the surface, there seems that little to get excited about; the game is, after all, a sequel to 2009's XBLA release Trials HD. The premise of that game is no different to this one: you ride a bike through various courses littered with obstacles. The original game was well received and certainly merited a sequel. What developers RedLynx have returned with however is something above and beyond what a sequel should contain.

Trials Evolution is huge, deceptively so. It's one of these games where you have to unlock a certain amount of medals before you can unlock the next section. Before you know it, a behemoth of a game is waiting before you to be unlocked. But you will have to be damn good to unlock it all. Certainly better than us.

Obviously early stages are simple enough. A few bumps in the tracks, a couple of easy jumps. Job done. Enjoy the simplicity of them, because boy it doesn't last for long.

The key element that makes this title stand out from other bike titles is the physics. A lot of trouble has gone into make the bikes and riders behave in a very realistic way. Despite the simplicity of the controls  right trigger throttle, left trigger brake, left thumbstick rider leans backwards and forwards  you will really have to work hard to find the way to get the most out of your ride.

The first bike is your basic machine; it's an easy ride to master, and couldn't be easier to control if it had training wheels attached. The problem is, if you're to travel deep into the game, this bike won't get you far.

The next couple of bikes are far more testing. They're certainly more powerful, making them faster machines too, but this extra power makes them even trickier to control. And control is most definitely the key to mastering this game. 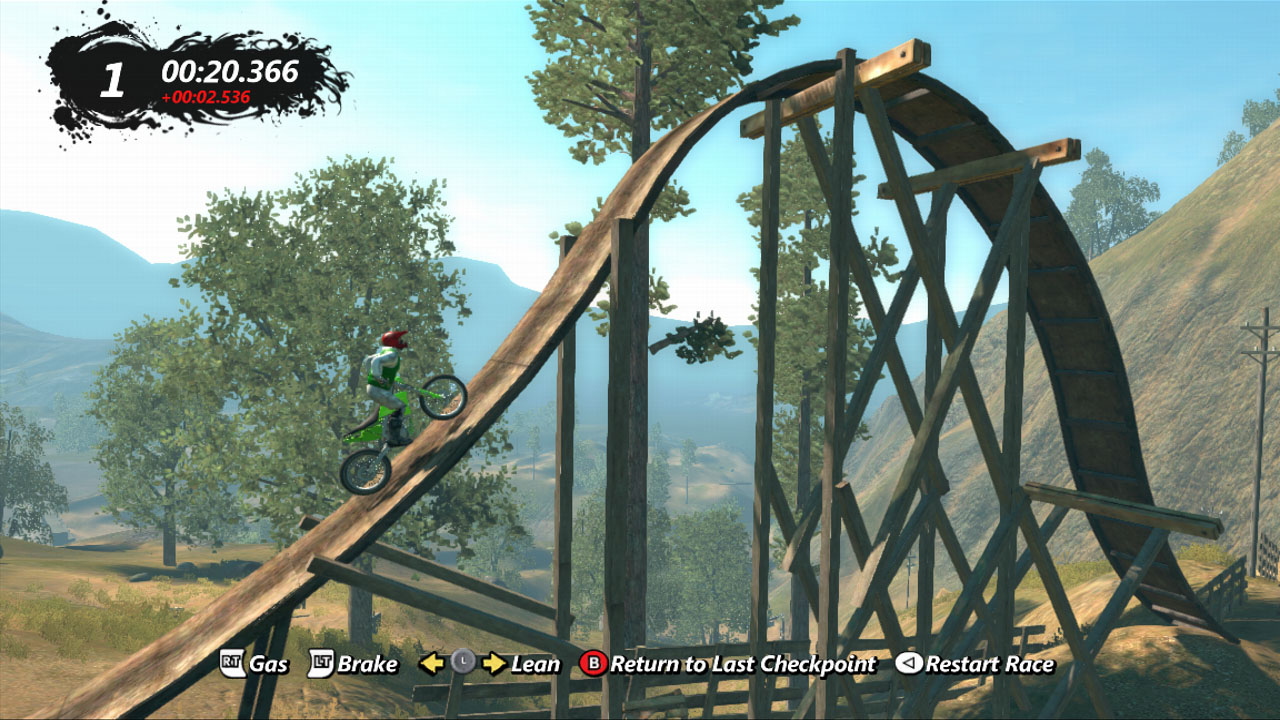 As fun as this is, Alton Towers have really let their health & safety rules slip.

The control aspect would be a whole lot easier if the courses weren't so testing. However, the courses have been designed with great ingenuity and creativity, albeit coming from the minds of sadists. Certainly from the medium sections on, they start to have you cursing liking a trooper, with their many twists and turns.

One saving grace are the save points throughout the tracks. To begin with, they're set out after pretty much obstacle on the course. Obviously the fewer times you respawn, the better your medal position will be. The game gets inside your head in encouraging you to go for gold in every event. But unless you were Evil Knievel in another life, more often than not you'll be happy to just take bronze.

Part of the charm of this game is that many of the courses can be completed in a minute or two, although latter levels can be longer. Considerably so. But by that time it's too late, you're already hooked. On one level it wasn't until a timer popped up on screen telling us how long we had left that we realised there was a time restriction in place. As it turns out, we were playing for 30 minutes straight. On one level. And we still didn't complete it. Night turned into day and despite turning the air blue, we were loving the challenge. Failing it in spectacular fashion, but loving doing so. And there was a great sense of achievement when it was finally conquered, several hours, days, and months etc. later.

It can feel that physics really hates you at times. All of the bikes, but particularly the later ones unlocked, can be mighty twitchy in the control stakes. Just a little tug on the throttle can have your front wheel up and your rider quickly on his rear. Again. And Again. It's understandable that the game is trying to give as realistic feel to the way the bikes handle as possible, but at times they truly are unforgiving. But with every squeeze of the throttle the game seemingly releases another puff of its addictive personality that somehow pushes you on regardless.

So, all in all, a pretty comprehensive title. The thing is, there's so much more.

For instance, there are levels that do away with bikes altogether and have you travelling around on skies, or flying around in a UFO, or moving around a course as a ball a la Monkey Ball. Although a nice distraction, and welcome relief, many of these challenges are actually harder than the bike racing element.

And then there are the user generated tracks that can be downloaded, which in turn means that you can be build your own tracks for the world to ride. And not just any old editing tools either, but the actual ones the developers used to produce the game.

Oh and if you want to pop online and race your mates, you can do that too.

And all this from an XBLA game. It doesn't have any right being anywhere near as great as it is, but like many of the tracks involved, it defies logic. And all for merely 1200 Microsoft Points. That's just over a tenner in her Majesty's money.

RedLynx have clearly poured their hearts and souls into this title for your playing pleasure. It may go over the top sometimes with its love of physics, but ultimately it equates to near perfect gaming chemistry.