Growing old as a gamer is never fun; those sharp, precise reactions you had when you where young eventually pack their bags and head of for younger climes. This can certainly give a sense of irony to Quick Time Events that end up being anything but.

If this sounds familiar, this may find you gravitating, in the slowest motion possible of course, to new genres of games. One of those more than welcome to embrace the mature gamer is the Role Playing Game, otherwise known as the RPG.

Sure some of them can be pretty speedy, but if you find yourself involved in a turn-based showdown, such as this one, then time is most definitely on your side.

But before delving into the nitty and the gritty of the mechanics of this Japanese RPG, Triangle Strategy is big on story. And when we say big, we mean that it almost feels like a virtual novel with a game strapped on. 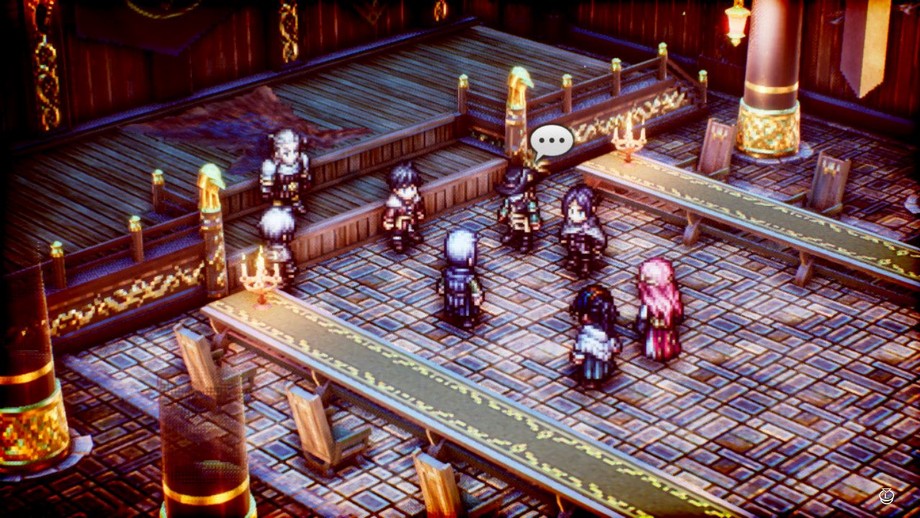 Listen, please don't think me rude, but could you hurry up a tad, I want to watch Housewives of Aefrost on Netflix.

If you’re looking for a slower pace of gaming, then it may be the perfect RPG for you, as there is a lot of reading to do. And in a sense, it’s no bad thing, as the game is keen to give its characters plenty of time to shine, as well develop, with pages of pages of dialogue and story narrative to navigate through. So much so, that it almost feels as if day has turned into night before you even see your first battle.

Of course you don’t have to read it all, as the game comes with English dialogue, which actually includes some impressive voice acting. And some not so much. But you can always make things zippier if you feel the need. But it would be foolish to actually skip much however, as the story of nations that end up stabbing their so-called allies in the backs, becomes more absorbing as the politics play out.

But what of the game play? Well, it is a modern re-interpretation of a classic: Chess. Each battle takes placed on a fixed grid, with varying visual takes on each one of course. You are given the choice of a number of characters that can take part, each with their own set of physical moves around the battle area, as well as their own special powers/abilities associated to them individually.

They then have to face off against the opposition, who have their own set of skills and abilities. Your characters are then given a turn to make a move and use and an appropriate ability, which then sees your enemy take their turn. And so on and so forth until one side has been defeated. It’s here where reflexes and gun sights mean absolutely nothing, and the ability to take a little time to think is king. 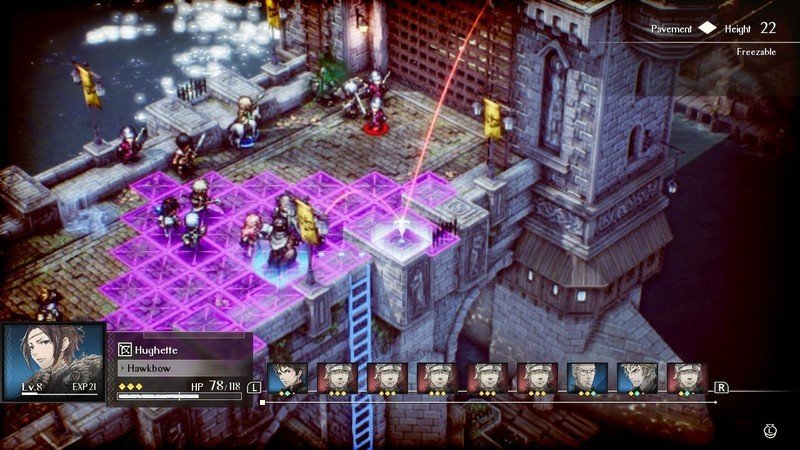 Here's an idea; anyone up fo popping down that ladder and ordering an UBER boat?!

No doubt that the game is visually presented in an old skool HD-2D format will warm the hearts of older gamers in particular, with many no doubt brought up with that style of game; the characters and backgrounds have a pleasingly retro, pixelated charm about them, acting as a throwback to similar games of old.

As it’s an RPG, there is levelling up afoot. Taking the slightly more difficult level setting, which was something like normal, we proceeded into the world of Norzelia. Having played a fair few number of RPGs in recent years, it just didn’t feel right going into an easier mode, and although no experts in the genre, normal sounded like the one closest to our usual medium setting. So off into battle we went.

Perhaps as a way of making up for the pages of story before them, the battles themselves can take a while. So if you haven’t worked it out by now, Triangle Strategy is not a title you can jump into for a brief gaming hit. You have to dedicate a fair amount of time and patience if you want to succeed, so it’s just as well that your knees are giving you grief.

To be honest, it felt like we got to grips with the game and its mechanics from the off, breezing through our first few battles. And doing so, levelling up nicely. And yet we soon found on our map that the next battle was deemed to be like two levels above us to attempt, which felt a little out of sync.

The great news about the game is however, is that even if you die in an attempt to defeat your foe, any experience points you achieved, as well as any levelling up of characters, stays with you. So essentially you could just keep on playing though the same battle until you’ve levelled up all your characters enough to brush pass them.

But you don’t fancy that, you can always go back to your encampment, where you can play through a number of battle exercises, with increasing difficulty levels themselves, that also allows you to level up your brave pixel-faced warriors.

There are certainly elements of this game that will put a number of gamers off, but ultimately, this isn’t probably the game for them.

As JRPGs go, Triangle Strategy is a beautiful, elegant example of the genre. Yes it demands a great deal of your attention, but in return it delivers a story of epic proportions, and one well worth getting sucked into turn-based battles for.