It’s easy to think that films based on toys started with the LEGO films (with the first being released in 2014), or even with the first Toy Story entry, released in 1995, but toy producers and filmmakers have been savvy for way longer. There’s the Transformers franchise for instance, that’s been transforming on our screens since 1986’s animated feature (and the TV series two years earlier than that), 1985’s The Care Bear Movie, with even those cute hatchable creatures getting a look in with Tamagotchi: the Movie in 2007.

So Troll dolls were very much late to the cinematic party, making their big screen debut as they did in 2016. This sequel sees stars Anna Kendrick and Justin Timberlake reprise their roles as Queen Poppy and Branch in this animated tale. 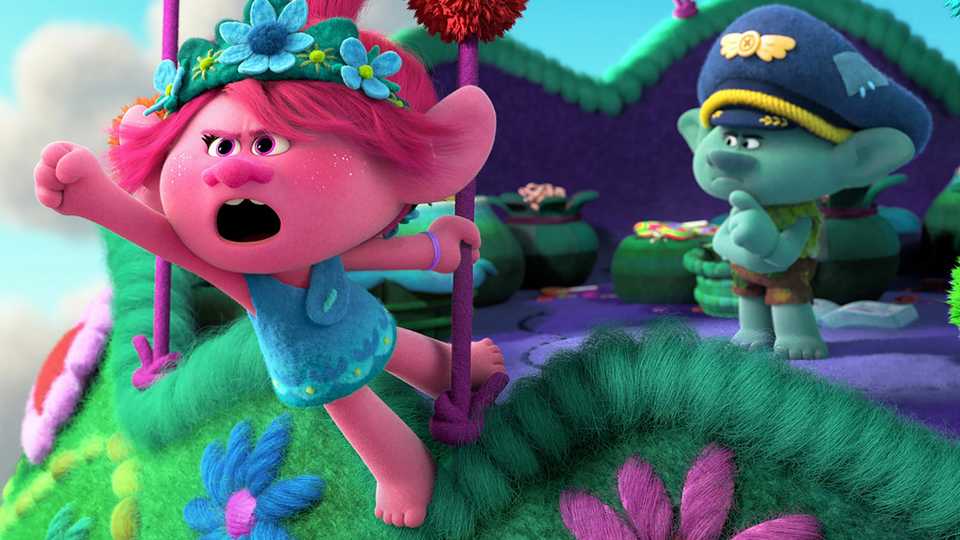 All was calm and quiet in the kingdom of trolls, well, it was for a while. Things changed however when Queen Poppy (Kendrick) received an invite to a party from Barb (Rachel Bloom), queen of the rock trolls. Poppy wasn’t even aware that there were other kingdoms outside of the one she rules over – pop – so gets excited about visiting a new one.

She soon learns that there are in fact six kingdoms in total: pop, rock, techno, classical, country and funk, with each leader in charge of their magical musical string. What she doesn’t know however, is that Barb intends to steal all of the strings, place them in her guitar and play a power chord that will make rock rule every kingdom.

When Poppy and Branch (Timberlake) learn of this dastardly plan, they decide they have to do whatever it takes to maintain the harmony throughout the land.

Strictly Come Dancing's new policy to allow trolls in the competition was a welcome one.

It’s easy to dismiss this toy-to-film feature as yet another cynical marketing ploy to shift more toys – which in fairness, is probably one of its primary objectives – but it’s actually a pleasant animated flick with a lot going for it, with the most obvious being its animation.

Imagine a rainbow that all of a sudden craves bags and bags of Skittles. It continues to eat them way past the feeling of fullness, to the point of predictable illness. And then, the floodgates open and the rainbow violently pukes its multi-coloured bile everywhere. And that’s what Trolls World Tour looks like.

But it’s not only its impressive – almost overwhelming – use of colour that catches the eye, but also its use of textures too. The world is akin to a video game, and could easily be entitled Little Big Troll Planet, with its varied use of fabrics within the world. Combine that with some really nifty animation and you have yourself a highly watchable film. So much so, that the makers of Frozen II, should feel a little embarrassed with themselves with what the DreamWorks team have achieved here.

Where it lets itself down however is in the script. It clearly had its fair share of issues, as five writers get a credit for the screenplay, which screams a lack of cohesion. Considering all the heavy lifting the marvellous animation does, it’s a shame that such limp dialogue lets the side down.

That said, the music is surprisingly bearable, and the film has a couple of beautifully surreal moments visually that should be applauded. It also helps that it works well as a standalone title so that you don’t have to invest any more of your time or sanity with watching the first one.

Let’s face it, this franchise isn’t one you would normally gravitate towards, and it’s easy to just hate on it for the sake of it, but it has to be said, if we were forced to watch this or Frozen II on a loop in isolation, we would plump for this, hands down, every time.

It’s insanely vibrant, and surprisingly quirky in places, so much so that during these strange times, Trolls World Tour hits more right notes than bum ones.