Regardless of whether youre a fan of their work or not, its difficult not to attest to the fact that the brothers Coen are modern day auteurs. Their body of work is as unique as it is diverse. And even when they dont always get it right (The Ladykillers and Intolerable Cruelty to name but two), their films are always somehow worth watching.

Considering how creative the pair are however, their latest is yet another remake (The Ladykillers being the other), this time of the classic western True Grit. And although they do a better job of it with this, do they manage to fill the dusty boots of the original?

Little Mattie Ross (Hailee Steinfeld) arrives in Fort Smith with one thing on her mind: revenge. This spirited and feisty 14 year old wants to see the man that killed her pa brought to justice. With the law in no real hurry to help her, she goes about hiring a US Marshal to help with her plight.

Her path soon crosses that of Reuben J Rooster Cogburn (Jeff Bridges); despite getting on in years, he has a reputation for getting the job done, one way or another. And although he clearly loves hitting the bottle, Mattie decides to hire him.

As it turns out, a Texas Ranger by the name of LaBoeuf (Matt Damon) is also seeking the same man Tom Chaney (Josh Brolin) for other crimes. Together, the oddest of trios set off into Indian Territory, with one common bond: to bring back the outlaw Chaney, dead or alive. 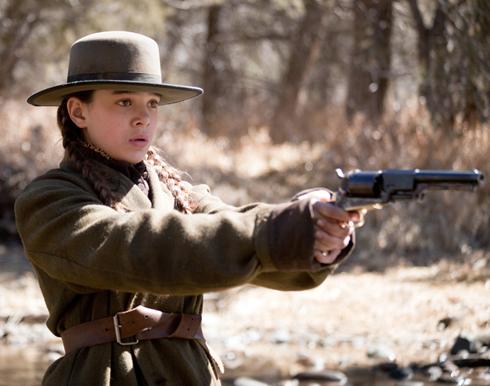 OK. I shot the sheriff, but I didn't shoot the deputy.

Although the film claims to be an adaptation of the 1968 novel of the same name by Charles Portis, it clearly takes many of its cues from the 1969 film. Not only are there chunks of dialogue that remain the same, but also classic scenes too, most notably the films climax. This then is more than just a mere remake; this version is similar in vein to Gus Van Sants pointless 1988 shot-for-shot remake of Psycho. In which case, when does a fond homage become a cynical copy?

Thats not to say that the Coens version isnt a good film; its actually a great film, and ranks as one of their best. There are also some great performances on show here, most notably Steinfeld, who, more than anyone involved, deserves the awards and plaudits.

But, compared like for like with the original, it pales in significance. Although this is the western genre here, theres one big elephant in the room: Jeff Bridges. Bridges is a fine actor, with some great roles under his belt, but the Dude is no Duke. John Wayne is, and always will be, an icon of cinema. Wayne starred in more than 35 westerns and epitomised the ultimate cowboy. It didnt matter what role he played, he was always John Wayne in a John Wayne western. Its a brave man then to attempt to take on such an iconic role and make it his own. But Bridges makes neither a great Cogburn nor a good John Wayne for that matter.

At times his Cogburn is incoherent, nothing more than a drunken buffoon. His overall performance is borderline clownish, with no indication whatsoever that this man of the law was at all great in his lifetime.

But its not just Bridges that fails. As well as Wayne, the original also featured Dennis Hopper and Robert Duvall; this one has Damon and Brolin. No contest.

And then theres the music. Regular Coen collaborator Carter Burwell does an OK job with the music, but its nothing exceptional. The original was created by Elmer Bernstein, who was also responsible for a few other soundtracks you may have heard before in films like The Great Escape, To Kill a Mocking Bird, oh and The Magnificent Seven. Again, no contest.

The original was directed by Henry Hathaway, who not only made a name for himself directing westerns, but many of which starred John Wayne himself. This is the Coens' first attempt at a western proper, but as theyve borrowed more than theyve created themselves, their film has nothing by way of originality. Nothing at all.

There are just some films that should be outlawed from being remade. After all theres a reason classics like Some Like it Hot are classics. Who would you get to play Marilyn Monroes part in a remake today? Lindsay Lohan? Anne Hathaway? Someone from Glee? And for the male leads Shia LeBeouf perhaps? Or Seth Rogen?

The reality of it is, there was no conceivable reason to remake True Grit, as even by todays standards, the original more than holds its own. The Coens have made a convincing and enjoyable copy, but dont for a moment think that it betters the original in any way. This begs the question then, why make it in the first place? To say its a fresh creative take on it is just pure spin; the answer, more cynically, no doubt, has more to do with commerce than anything else.

To reiterate, this is not a bad film, but this isn't enough to justify its existence. By all means go see it  and, importantly, enjoy it  but if you want to see a film with real grit, aim your sights on the original.