Terry Pratchetts latest offering is quite possibly the most impressive football-related contribution England has made to the beautiful game in 2010, a world cup year. Hes pulled off something quite remarkable: hes written a book about football that - remarkably - isnt crushingly tedious to the non-football fan. Well, when we say hes written a book about football, its also about wizards, goblins, rivalry within the working class and within the upper class, with a bit of romance thrown in for good measure. Somehow it works. How? A dose of Pratchett genius, thats how. 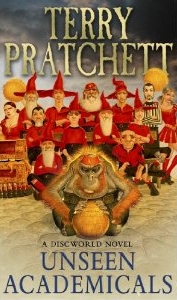 Onto the plot. It all starts at Unseen University, where the wizards get on with the important wizardly business that they occupy their days with  which mostly seems to involve eating tasty snacks  and people like Trev and Mr Nutt get on with other important work like dribbling candles. Wizards, it seems, need their candles to have lots of waxy dribbles running down them if they are to do their magical work effectively, but new candles are distinctly lacking in these essential qualities. Candle dribbling is pretty much as far down the hierarchy as it is possible to get at Unseen University; its the kind of job that people without the necessary papers, who might be on the run or who are otherwise not fit for higher profile jobs, do. The mysterious Mr Nutt arrived there one day and started dribbling candles, and dribbling them very well. Mr Nutt is probably a goblin from Uberwald, and Trev is definitely an ordinary kind of workshy city boy whose dad was a famous footballer.

Now is probably the time to say that football on Discworld isnt quite the same as our version. The ball isnt a ball, for one thing, and players and spectators mingle in what more closely resembles a riot than a game (although its often difficult to distinguish the two in real football, except perhaps its slightly more orderly and people queue a bit more). Lord Verinari, tyrant of the city of Ankh-Morpork, devilishly attempts to tame the game for obscure political reasons of his own. This coincides with the wizards suddenly discovering that in order to collect on a tidy sum of money they must play a game of football. And so the scene is set.

Its not just about the game, and making it more beautiful, however. Glenda and Juliet work in the kitchens  an important job in a university that takes its tasty snacks very seriously  and come to be Mr Nutt and Trevs romantic interests. All four of them become embroiled in preparations for the upcoming match. Then theres Mr Nutt, whose mysterious past comes to shape not only his future but also that of the city.

Its undeniably clever. The book is peppered with references to popular culture, like the (dare we say it? yes, we dare) pointless rivalry between football teams and the banality of celebrity culture, the insidious effects of which on the lives of the main characters Pratchett skilfully draws out. One of the central messages is that we should look past what were told about different types of people to see the actual person, and that we should figure out who we are outside of the categorisations and labels that society applies to us because of the job we do, the clothes we wear, the team we support or where were from. Ordinarily this kind of moralising messaging might be irritating. Somehow, when youre talking about goblins and orcs and wizards and dwarfs, and when youve got Pratchetts giggleworthy prose dressing it up, its ok. No, its better than ok, its sort of brilliant.

Terry Pratchett is to fantasy what Barbara Cartland is to romance: one of the most prolific authors of the genre. Hes written 38 fiction titles in the Discworld series, co-authored a further 12 books about Discworld (spanning folklore, art and science, amongst other foci) and 4 maps of Discworld, and then theres his 3 non-Discworld adult fiction titles and 8 non-Discworld childrens titles. This is clearly a fellow with a lot of good ideas whos got the knack of translating them efficiently into written, commercial form. Others have also spotted the opportunity: his works have made it onto the radio, into theatre, onto television (you might have seen the recent adaptation of Going Postal or before that, The Colour of Magic, The Light Fantastic and Hogfather) and into role-playing, PC and console and Internet games. The rights to some of his works have also been sold to be transformed for the silver screen.

Youd have thought that there wasnt much left to say about Discworld and those daft wizards, but youd be wrong. This is part of Pratchetts skill, weaving social commentary into his fantastical world. Heres hoping Pratchett carries on writing for as long as he can and wheels out the wizards at least one more time.