It’s easy to take for granted how far gaming has come over the years. From days of Pong to the incredibly impressive open worlds that we can literally lose ourselves in today.

And yet, as gamers, we’re never really satisfied, with many already declaring themselves as suffering from open world fatigue. And they may have a point. We don’t think we’ve actually completed any of the most recent large open world games, not through want of trying, but not only do they require a huge investment of your time, it’s not long before the next big game is released that you have to then also delve into.

Thank the gaming Gods for indie titles like this, with what could be the antithesis to open world games in the most glorious of fashions. C'mon guys, all I said was that I prefer Game of Thrones?!

You choose a character to play and you try to stay alive. That’s it. With just using the left thumb stick, and no other controls during play, you move your character around a flat stage, killing enemies that come towards you with whatever weapon you carry by default. This could be the bible, for instance, that rotates around you.

By killing these enemies, some of them drop gems. You pick enough of them up, and you get to level up. Here you’re given 3 options, which are random every time. If the option is there, you can upgrade your bible to level two, making it that little more powerful, or you can choose another weapon to add to your arsenal.

The game continues like this until you eventually die. Which you will, often. But the longer the play, and the more coins you collect, will allow you to not only buy permanent upgraded abilities to help you with your fight, but you’ll also get the opportunity to buy further characters, each with their own unique style. 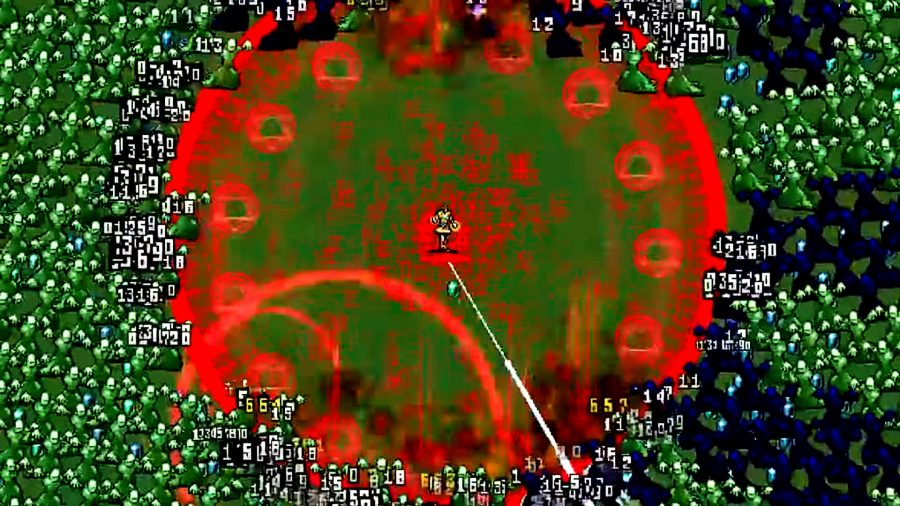 Aplogies everyone, but that curry I had last night is reeking havoc.

It’s a brilliantly simple premise, as well as being an easy game to get to grips with, as there’s no need to shoot or anything, as it’s all done for you, you just have to move.

But at the same time it’s cunningly addictive, as every time you play through, there’s a temptation to have just one more run.

And although the games is described as a rogue-lite, which by definition it is, that shouldn’t put you off, if you’re not a fan of the genre. We’re not, and avoid them like the plague, and in truth, we were going to swerve this title for that very reason, and it was only the fact it was on Game Pass that the curiosity got the better of us. And now we’re bloody hooked. It’s only been a couple of days and we’ve made it 75. That’s probably not that much of a big deal for hardened rogue-lite’rs, but it’s a big achievement for us.

In terms of looks and game play, it owes a lot to older 2D games, specifically the 1985 classic Gauntlet, with its top down view and waves of enemies. The main difference between the two that the game is currently only a solo affair, with no co-op or multiplayer available, which is a shame.

The game will condition you to the point where you will last longer than you expect, and pass the golden 30 minute point, which will mark the end of the stage, where you will face the kind of boss battle with Death. But you will die, eventually, as in life, because even if you do manage to beat him, waves more will appear and finally take you away. But reaching this point does open up a new stage, which will include new weapons to pick up and upgrade, as well as new enemies, as is the case with every stage you progress to.

And although things do get oh-so frantic on screen – at one point there will be so many enemies you can no longer see the floor – it’s still oddly meditative, as you move your character around, trying to collect as many gems as you can to upgrade to get yourself out of any jam.

Vampire Survivors may not be the prettiest game on the block, but for a shot of pure gaming adrenalin, it cannot be beat. It’s a game where you don’t have to ever over think your objectives, you just move and kill the baddies. And really, that’s all we ever really want to do.

For older gamers it’s likely to evoke a warm, fuzzy sense of nostalgia, as well as being a refreshingly simple game to play.

But most of all however, it’s a little gem of a title that is just a sheer joy to play, making it an indie masterpiece.