Venom: Let There be Carnage

Venom is one of those rare Marvel characters where the main attraction was the actor playing him rather than the character itself. The film certainly wouldn’t have pinged that highly on mainstream audiences’ radar if a relative unknown played him, that’s for sure.

And although the first film did really rather well at the box office, it was a patchy affair, quite clunky in places, suffering from an identity crisis of its own, ironically enough, in terms of what kind of Marvel film it wanted to be.

Tom Hardy returns once again for this sequel, that’s not only an extension of the first, but also acts as an origin tale for his latest adversary Carnage.

Hey Tom, just wanted to let you know that your voice was shit as Bane, all the best, DCU fans.

Due to their symbiotic connection, Eddie Brock (Hardy) and Venom (voiced by Hardy) are still ironing out the various quirks of their relationship. It’s not too long before their boisterous banter is interrupted when Brock is informed that former foe serial killer Cletus Kasady (Woody Harrelson) will only talk to him.

Brock agrees to go, which works to his advantage as Venom manages to determine where some of his victims are buried, giving Brock a huge story when published.

It doesn’t work out that well for Kasady however, who, in light of this new evidence, ends up getting the death penalty. He somewhat surprisngly invites Brock to the event, where they manage to have a private chat before it. Things get unexpectedly physical, which sees Kasady managing to get a taste of Brock’s blood. And of course when Venom is inside of him, Brock doesn’t have normal blood, which results in Kasady having a symbiote all of his own develop inside of him, called Carnage (Harrelson).

Now the odd couple find themselves in a position where they have to work well as a team to take down essentially one of their own, who clearly isn’t interested in maintaining law and order like they are. 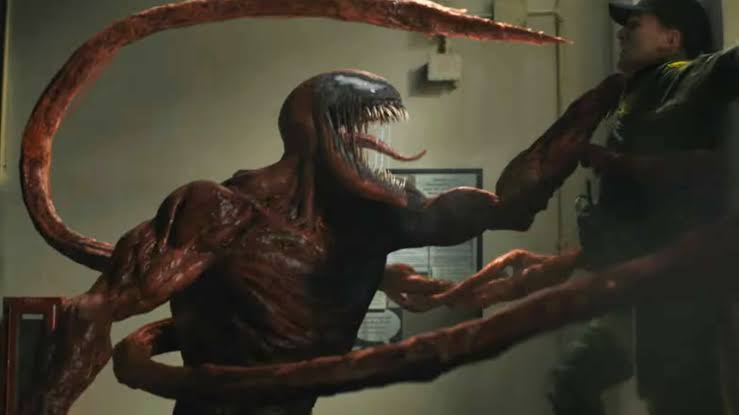 Now what was that were you saying about my breath?

Hardy is no stranger to having conversations with himself on screen, as he played both Reggie and Ron Kray in 2015’s Legend, as well as reprising both his roles as Brock and Venom here. And their relationship appears to be more humorous than ever, with a Brock being the Dean Martin of the double act and Venom being a cross between Jerry Lewis and Jim Carrey’s The Mask.

This may have something to do with Hardy himself getting a writing credit, as well as fellow Brit Andy Serkis taking over the reins as director. Despite the darker tones that both Venom and Carnage inherently bring to the party, Serkis and Hardy seem keen to still keep the mood fairly light throughout. And the film is certainly at its best when the banter between Brock and Venom flows. They even managed to squeeze in a reference to the popular ITV quiz Catchphrase which no doubt made presenter Stephen Mulhern chuffed to bits.

And you would think that bringing in a nemesis in the symbiotic shape of Carnage would improve things, but essentially you end up with not just one blob of animated goo, but two. And there’s the rub; as a physical presence Venom just isn’t all that. He almost confesses as much in the film itself, when he ponders having a cape and mask, prerequisites of many a superhero, which Brock swiftly shoots down, all too soon sadly. Although Venom has the personality to get by as a marvel character, his physical form resembles that of a 3D ink stain more than anything else. It’s just rather dull and unexciting.

Still, the film does manage to bring something a little different to the MCU party, and that should be commended. The story is engaging, much of the dialogue is snappy and fun, and the special effects are competent if not dazzling, making this second outing for this anti-hero a gooey step in the right direction.