It shouldnt be forgotten that the game of tennis is an integral part of video game history. In the beginning there was Pong. For many of the first generation of gamers, it all started with that bat and pixelated ball. Looking back with rose-tinted virtual glasses, its amazing how much fun was had playing it.

Even though were all Buck Rogers-like now, sitting pretty as we do in the 21st century, tennis on home consoles lives on. And would you believe it, its still bat and ball fun. The Virtua Tennis series has been knocking around since 2000 when it appeared on Segas Dreamcast, deemed by many who played it to be one of the best games on the console.

In the here-and-now however, Virtua is beginning to look a little tired  for single players at any rate. The World Tour mode is still intact, with you starting off as a lowly-ranked amateur, having to prove yourself on the circuit. Make it to number one, you then get the chance to turn pro and... do it all again. 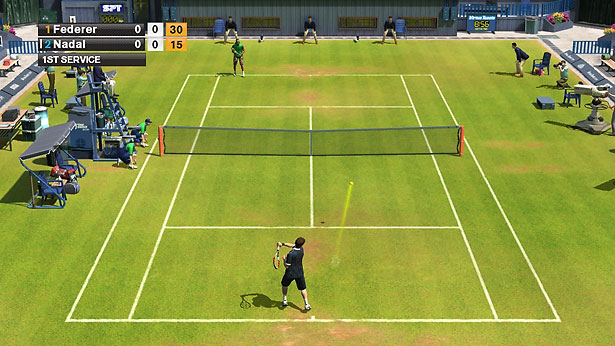 The real problem is the difficulty level  it doesnt have one. It is stupidly easy to play through the amateur part of the tour without actually dropping a game, never mind a set or match. This could mean playing through over fifty-odd games just by moving the left analogue stick around a bit and pressing the X button. This makes you feel like Roger Federer for five minutes, and after that, well, you just feel a bit numb.

This soon changes however, if you dare venture online  which you can finally do with this PS3 incarnation. Out in the real (cyber) world, the game finally discovers its competitive edge. After breezing through the offline tour mode, its quite the learning curve playing real folk, who will really test your game. But at least you will finally be tested, which is something.

Elsewhere the love-'em-or-hate-'em mini-games are here, with twelve types available including Shopping Dash, Pirate Wars and Pot Shot. You dont need to bother with them, but they can help increase your players abilities on the court.

Another disappointing aspect of the game is the rather lame animations. Sure, the appearances of the real pros look similar enough, but it would have been nice to have some personal habits, rituals, or even grunts or groans to go along with them. Instead, there are a minimal amount of actions they perform, which include spinning their rackets and the obligatory tapping of their shoe heels with their rackets. Thats about it. You cant even run into the net, in case you ever got the inclination. In fact, the net doesnt move, at all. So if anything, it looks and plays pretty much the same as the excellent, nearly decade older, Dreamcast version.

Perhaps the future of the (video) game of tennis lies in the sweaty hands of Wii owners. The Wii version of this game utilises (to some degree at any rate) the latest MotionPlus technology, as does EAs Grand Slam (review coming soon). And with both Microsoft and Sony announcing motion capturing devices for their systems at the recent E3, it looks like tennis games would certainly benefit from this new direction.

Meanwhile, for those wanting a fix of tennis without working up a sweat, Virtua Tennis 09 can certainly serve that up. Its just a shame it couldnt do any more than that.