You may have noticed in your social media feeds of late posts featuring an image, with a sentiment roughly saying that you’re really old if you know what this is, with a picture of an audio cassette, or a phone box, roll of film etc.

The subject of this film could also feature, as his success is very much rooted in the eighties, and the picture would simply be of his face, an iconic look for all those who do remember, of frizzy hair and a moustache.

And this is his story. Sort of. 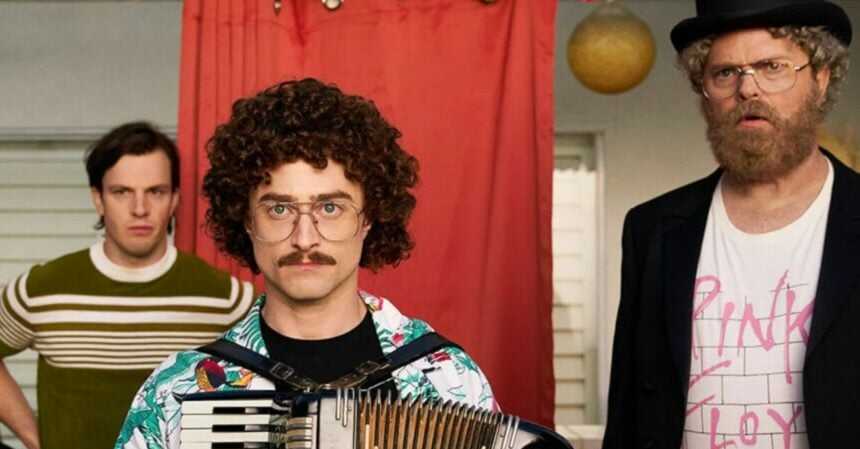 I must warn you, this accordion is loaded.

Despite having a father who was keen on having his son follow in his footsteps of working in the local factory, making something or other, young Alfred Yankovic had bigger dreams, which revolved around him playing the accordion.

He got his way, becoming one of the world’s most well-known accordion players, who had the remarkable talent of writing different lyrics to popular songs, going by the name Weird Al (Daniel Radcliffe).

But Al realised he wanted more than just the success from writing parodies, he wanted love. He thought he found it too, in the arms of the hottest rising star of the time, Madonna (Evan Rachel Wood), but she had plans of her own, and didn’t care who she used to get her way, including one love struck Al. 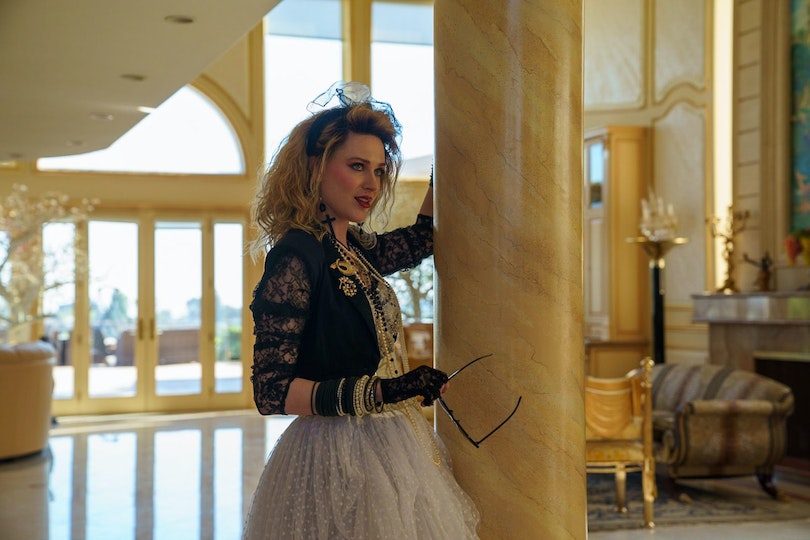 I'll stand here for the photo, because it's phallic, right?!

If you’re looking for an accurate biopic of Al Yankovic’s life, this is not it. Not even close. Much like his own work in music, this is a parody of his own life, told with a fair amount of creative flair. A case in point would be his relationship with Madonna, which, surprise surprise, never happened. If it did, no one would be more surprised than Madonna herself, and then Al.

In fact, the film oddly has more in common with the MCU than a biopic, as it could be argued it all takes place in another multiverse, with Weird Al being far more relevant than he actually was.

Based on a fake trailer in 2010, with Eric Appel directing, the response led to this full feature, with all its silliness intact. An example of which would be the fact that all the music features Weird Al actually singing, and Radcliffe miming, but it only enhances the twisted meta of it all.

Radcliffe continues to show what a versatile and fairly underrated talent he is, as he chooses to ignore major roles in huge studio films, for more niche, and far more interesting projects such as this. And you can tell he had a ball.

And it is a film that will go completely over the head of a number of generations, who could easily walk away thinking that Yankovic and Madonna were actually a couple. They weren’t. He wished. Which is possibly why it features so heavily here.

Letting her hair down too is Wood, who embraces a role with so much humour, after playing some severely serious characters of late, such as Dolores in HBO’s Westworld.

It is the type of film where its nonsense is only going to make sense to those who are familiar with Al’s classic parody work such as “Eat it” and “Fat” from the eighties. If you have no understanding of who the hell he is at all, this film will make no sense at all. Or a little less sense than it already does.

It’s all too easy to brush off his success and label him a novelty act, but being parodied by him was a big deal, just ask Nirvana; when they agreed for Al to parody their work with “smells Like Nirvana”, the band saw an extra million units of their work sold off of the back of it, which doesn’t smell bad at all.

And you can tell how appreciated Al is with the large number of cameos throughout the film – including the great man himself - who no doubt appeared for the love of it rather than the pay check, considering what a small project it was, that was also remarkably shot in just two and half weeks.

A wonderfully silly hit of nostalgia then, wrapped up in a warped story, that will indeed age you, but you’ll have a lot of fun with it as it does so.