Since leaving his TV 9-5 job, Steve Carell has been quietly carving out a highly respectable career on the big screen. After playing the kooky Michael Scott in the US version of The Office, he could have easily been typecast as the goofy TV guy for the rest of his career.

Instead, Carell has picked a varied range of characters, both silly and serious – and all the stops in-between – showing how diverse a talent he truly is.

In this latest from director Robert Zemeckis, he has to mix it up playing a real life character who, it’s safe to say, has certainly been through the wars.

With all that milk I can't believe you forgot the cookies.

Mark Hogancamp (Carell) is a broken man. It wasn’t always the case; he used to be an illustrator – a pretty good one at that – but since being violently attacked in a bar, he has little to no memory of the man he used to be.

He’s so traumatised by what happened that he has retreated into another world – welcome to Marwen. It is a world he’s physically created, set during WW2, with 12-inch poseable action figure Captain Hogie as the main protagonist. He’s not alone; Marwen is populated with a number of female ‘dolls’ – all of whom represented by women who has known in his real life – who, despite their lack of appropriate clothing, know how to look after themselves. Which they need to do, as Marwen is often terrorised by Nazis.

It’s a world that Mark has captured on film, which has led to his own upcoming show in NYC. But with a number of distractions to deal with, mainly a new neighbour (Leslie Mann) and his pending court course, Mark struggles with reality, relying more and more on the goings on in Marwen. 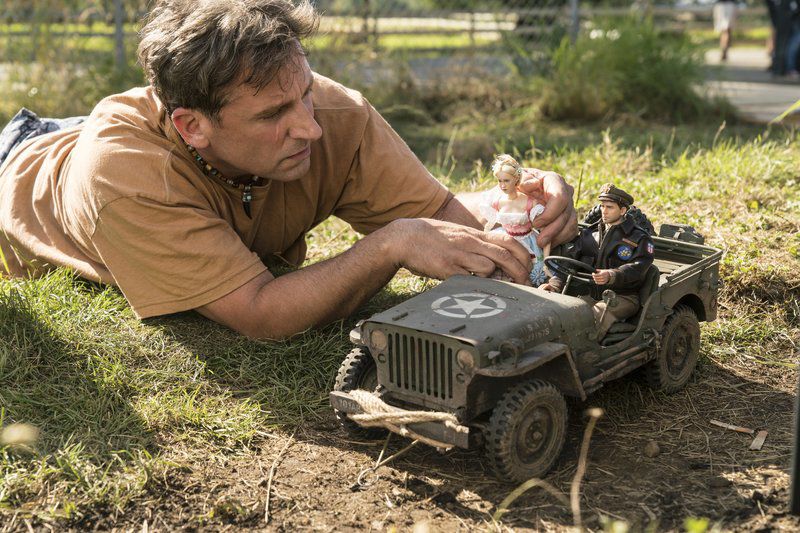 Where does this guy get off man-handling me?!!#MeToo!!!

Considering that the core of this film is a based on a true story, Zemeckis has certainly pulled out all the stops to present it in an entertaining fashion. Where artist Hogancamp captured his version of Marwen with still photography, Zemeckis brings this 2D world to life with cutting edge CGI. The result is essentially an adult Toy Story.

Whilst this imagery is certainly eye-catching, it detracts from Mark’s raw story. Here’s a man who has gone through hell, with half of his story coming to life like a Disney flick. Imagine Harvey being represented by an animated character throughout, Like James Stewart hanging out with an ancestor of Roger Rabbit, and you can start to imagine what a very different film it would be.

This film would have certainly been a stronger film emotionally without the CGI distractions, and would have highlighted the struggles with mental health issues with more focus. Instead, in its place, is a film with toy soldiers running amok, at the expense of a man’s real grip on reality.

Carell manages the tricky balancing act of both characters with aplomb however, but it won’t go down as either his or Zemeckis’ finest two hours.

Perhaps it’s that rare case of where less toying around for Zemeckis would have been more appropriate.