Lets face it, the title is a stupid one. Sure, okay, it refers to an assassin having a lot of blood on their hands. Whatever. If theres to be a sequel, we wont be surprised if its called Wet II: Moist.

But looking past the silliness of its name, Wet isnt so bad.

Its gun-toting, samurai-wielding heroine Rubi is a gal on a mission. Well, several missions actually. But what they mostly entail is going into an area and disposing of all the bodies that get in her way.

To break up this kill-fest are a number of QTE (Quick Time Events) scenes, which rely on you pressing the correct button at the correct time to progress. If you dont manage it, well, you dont progress; its as simple as that. Theyre a pleasant distraction from the ongoing hack n shootiness of it all. 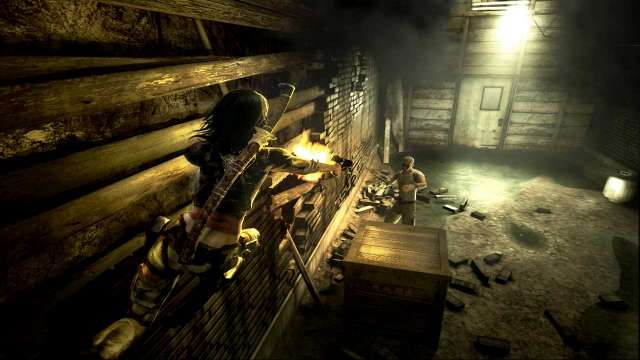 I'm sorry but this is a rubbish first date. You have made no attempt to clean up and there's not a whiff of scented candles anywhere. And for that you must die...

Anyone who has played John Woos Stranglehold will be quite at home here; Rubi can go into slo-mo action, shooting baddies as she runs along walls, slides under furniture, jumping gracefully through the air etc. The only problem is that her gun sight is about the size of a pea (garden, not marrowfat), so by the time youve actually trained your gun sights on them, your slo-mo time may well have finished. Its easy enough to activate again, but really, would it have harmed to make it a bit bigger?

The environments arent nearly as destructible as Strangleholds world however. Mostly a few crates will explode, and a bit of random scenery and thats your lot. Which is a shame, as it would have been great to see more of everything being either shot or slashed to bits, not just the baddies.

It wont take you long to notice that the game is some sort of homage to Quentin Tarantino films in particular and grindhouse films (B-movie exploitation films) in general. At one point Rubi enters a level that is a rage mode, where the action takes places in black, white and red. Its visually stunning to look at, and is certainly a highlight of the game. The only problem is that there arent enough of them.

In terms of the mechanics, Rubi is fairly easy to control, although sometimes her actions are let down by a poor camera system. The way she moves and responds to her environs is reminiscent of bits of Prince of Persia, Tomb Raider and Uncharted. Yet the combination isnt as refined as it could have been, making certain moves feel awkward and clunky.

One nice touch is Rubi-vision, which lets areas glow red which Rubi can interact with in terms of progressing; this could be a ledge, or a pole to swing from. So if you think youre in a dead end, using it can usually give the hint you need to move on.

Despite the addition of QTE scenes and rage mode, there is just too much repetition in the game play. You enter a room, kill everyone, then move on. At some point youll enter a bigger room, where you will also have to get to door points and destroy them, as to prevent any more baddies pouring in. But the addition of door points cannot disguise the fact that youre just running around and shooting.

Considering that one of the writers from 24 allegedly scribed the storyline for this game, they probably wrote it a side of a napkin during lunch one day whilst doing his proper job. Sure it gets Rubi to travel the world, but theres never any emotional commitment to either her plight or her as a character. Perhaps the makers of the game were expecting more, considering they employed Dollhouse star Eliza Dushku; but lets face it, if you were going to hire her for anything, simply for her vocal talent would be waaaaaay down on the list. Still, Malcolm McDowell and Alan Cumming give some of the cut scenes their much needed acting gravitas.

The music is definitely above average for a gaming title though; it provides the biggest clues as to the games influences, as well as making playing through the game vastly more enjoyable.

Whats truly disappointing though  despite the fact there is no multiplayer  is the games ending. After fight after fight, you finally come face to face with the big baddie. As you prepare for a long and bloody battle, the letter X flashes up on the screen, signalling the start of... a QTE scene. Thats right, the game ends with you hitting a few buttons in the right order. To say this is a disappointment is a severe understatement.

Despite all its obvious faults, its difficult to not have fun with this game. Rubi could have done with a greater arsenal of shooting power, but what she does have, does the trick. The environments are varied enough for you to push on and see whats waiting for you around the corner. It also doesnt punish you by being all that taxing  although you can turn the difficulty up a notch or three if you want a real challenge.

Although its nowhere near as original as it would like to think it is, the elements it borrows from other games, it uses  for the most part  well. And overall, its entertaining enough. It certainly shows enough promise to warrant a sequel. Lets hope the only disappointing thing about that will be its title.