Why Don't You Just Die!

Every now and again, you’ll find yourself watching a film, and there’s an action scene that makes little sense, stretching the bounds of reality, when a character simply refuses to bite the bullet.

For his debut full-length feature, Russian director Kirill Sokolov, has taken this notion and hasn’t just run with it, but thrusted it into the middle of a busy intersection and caused untold chaos and bloodshed . 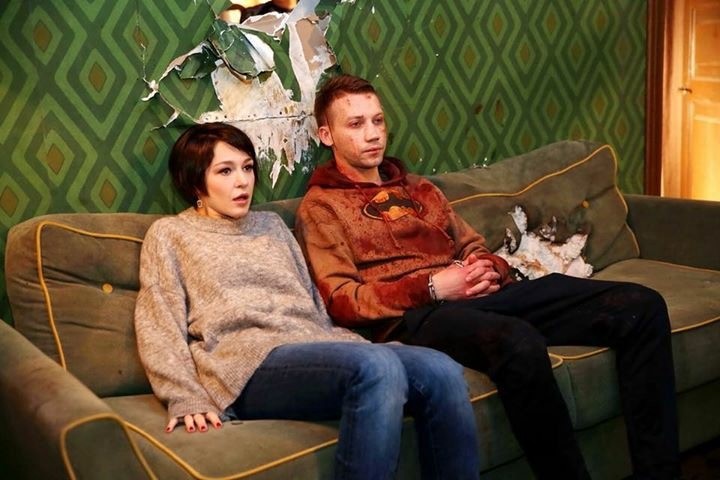 The latest cinema-going experience really made you think you were there.

After a heavy discussion with his girlfriend, Matvey (Aleksandr Kuznetsov) decides to visit her father and have it out with him. You can tell that he isn’t necessarily in the most rational state of mind due to the hammer in his back pocket.

Although initially suspicious having a young man at his door, her father Andrey (Gennadievitch) reluctantly lets him in. It quickly transpires that this isn’t the normal first meeting between a father and his daughter’s suitor, when events quickly spiral out of hand.

Steve was definitely going to contact Amazon about their shoddy personal delivery service.

If you’re waiting for the exact moment when this film hits the absurd button, you don’t have to wait long. And when it does, it simply doesn’t let up as it continues its brutal assault of silliness.

To give you an idea of what to expect, imagine placing Caro and Jeunet into a blender with early Edgar Wright, and sprinkling the meaty, blood-soaked chunks with a light spray of Sergio Leone. If that idea is already zinging your senses, then that’s about right.

Sokolov, who also wrote the creative script, truly throws everything at the screen, with no intention of any of it sticking, instead enjoying the dripping effect throughout. It’s a bold debut, with some striking visuals, including his vivid palette of red and greens.

There’s also a hint of an adult graphic novel, not only from the way it’s also shot, framed as if it could exist on the page of a comic, but also that the main protagonist wears a Batman hoodie throughout, whose theme of dolling out hard justice he mimics.

It’s the blackest of comedies that embraces its absurdity from beginning to end.

If ever there was a film closest to being a live action Itchy & Scratchy, this would be it.