In 2006 it was difficult not to be impressed by the Wii launch title Wii Sports. It utilised this new wand-like controller to perfection, and certainly helped towards making the Wii the phenomenon it went on to become.

Fast forward eight years and the title has re-surfaced for Nintendo's struggling Wii U.

Once again you can grab a racket for tennis, go bowling, play golf, jab jab left hook punch your opponent in boxing and grab a bat and strike it lucky in baseball.

All of these activities have been given the HD treatment, so they'll certainly look the business on a flat screen TV. And yet nothing new has been added, no special touches that will make you drool, making it all look a little on the tired side.

Wii Sports strikes back on the Wii U.

For anyone who has played the original, this will feel instantly familiar. This time around though, you can only play through using a supersized Wii-mote (ie one that has MotionPlus either built in or added on) and the Wii U Pad. This is supposed to be for added accuracy in the controls, although you'll be hard pushed to find them.

Once again in tennis, you only control the racket and not your character. Swing, hit the ball (or not), win the point (or not). Nothing else has changed; no leagues, no competitions to enter, just the same format from eight years ago.

The same can be said for bowling; pick up the bowl and, well, bowl. You hit some pins. Repeat.

Things are a little different with the last three events. The actual playing mechanic of striking the ball in golf hasn't changed at all, only in this version, you place the Wii U Pad on the floor, where you can see the ball you're supposed to be hitting. We know, impressive right?! One minute it's there, the next, it isn't! As revolutionary an addition this might be (or not  definitely not), it may not improve your handicap. Playing through an 18 holer, we rarely struck the ball the way we wanted to. Maybe being lefties had something to do with it. Still, we're not sure Oscar Wilde would approve; he was quoted as saying that playing golf spoilt a good walk  in this version you don't even get to do that. Still, if you like golfing and/or enjoyed the original golfing game, you should enjoy this; after all, it is essentially the same game.

Boxing is different in the control department too. The Nunchuk support has been dropped this time around in favour of another Wiimote; this means that if you want to box with both hands, you need two MotionPlus enabled Wiimotes. You can play with just the one controller, but you literally punch with just the one hand. Again, this is the only difference from the original.

Last but not least is baseball. This is really the only game that gives a purpose to the Wii U Pad; not only is it the only way to pitch, it's also the only way to catch. You still use the Wiimote for batting up though. These additions can certainly liven up the multiplayer side of things. And you don't have to put the Wii U Pad on the floor either. Out of all the sporting disciplines available, this one, surprisingly, is probably the most entertaining. 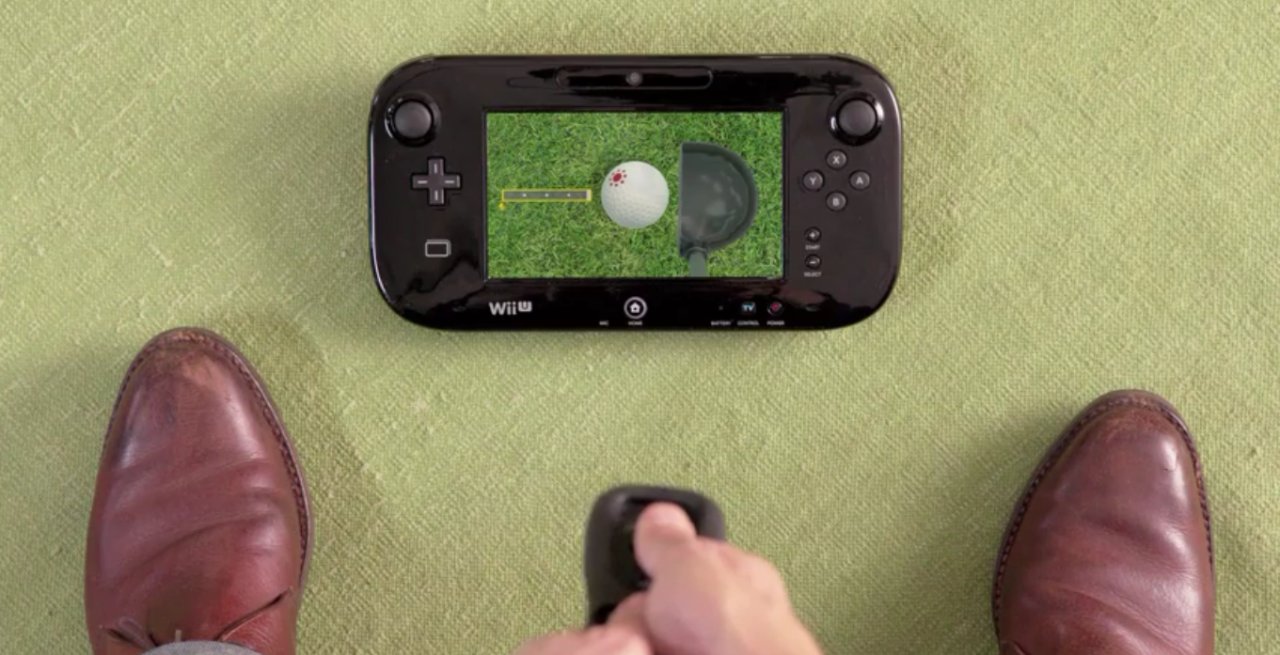 Rory Mcllroy dominates golf so much he can 'phone' in his game from home.

There is the option to play on line this time around, but this feels about as tagged on as a thing can be.

There was a real opportunity for Nintendo to reboot this game; instead all they have done has given it a rather lame visual make-over. If you are still curious as to how they play, at least you can download them individually to buy, or importantly, to rent for a fixed time. Considering what little has changed with the title, this is most definitely your best option.

We feel sick to the stomach in saying this but if you enjoy any of these sports here, you're probably better off...playing the real thing. Outrageous we know, but that's how this rehash of an eight year old title has made us feel.

Nintendo has done something truly remarkable with this collection; they've managed to take quite a special game and made it less so. Oh boy.