If there’s one actor whose doorway to their mind could be prised open and peaked into, it would be Nicolas Cage’s. Recently Cage surpassed the hundred screen credits mark in his career, proving that he has a strong work ethic if nothing else. Unfortunately his choice of projects is less commendable.

There are some who would say that Cage hasn’t made a decent film in over twenty years, and for the most part, that’s difficult to argue with. And from 2017 to 2019, Cage appeared in 18 films, which although an impressive number, only adds fuel to the fire in terms of quality control, or the severe lack of it.

It’s difficult to comprehend, for instance, Cage’s involvement with this project, which sees him take on a part time job in a rundown attraction. 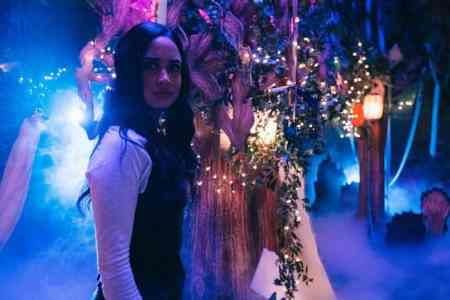 I think this indoor decoration is a little OTT, don't you?

A man (Nicolas Cage) is minding his own business, driving along a road in the middle of nowhere, when his tyres blow. It’s not long before he has some roadside assistance from a local mechanic, who tows his car back to his garage in town.

The mechanic tells him how much it’s going to cost to fix it, but the only trouble is, they only accept cash, which the man has none of on him. The mechanic says that he may have a workaround, if he’s willing to do some cleaning at a local children’s attraction that has been closed down for some time. As it’s only for one night, the man agrees to what sounds like simple janitorial duties.

But nothing is quite that simple at Wally’s Wonderland, where the animatronics have a life of their own, and they don’t take kindly to strangers. 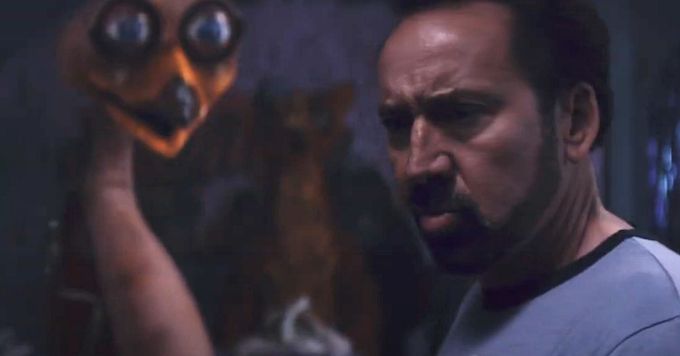 So, let me get this straight, you want me to pretend that im riding the ostrich?

Actors are attracted to all types of roles, and when you reach the level of success of someone like Cage, you would think that a pay check wouldn’t necessarily come into it. But if that doesn’t, then what the hell was his reasoning for choosing this limp horror? One possibility is the script, and the fact that Cage didn’t have to learn any lines, as he just doesn’t have any. Not one. His silent character is reminiscent of Clint Eastwood’s monosyllabic roles in his Spaghetti western films, as a lone stranger arriving in town who quietly goes about his business. But Cage’s T-shirt wearing Janitor doesn’t have the same kind of authoritative appeal on screen. Instead, Cage looks somewhat silly in combative mode against a bunch of clearly actors in low quality costumes.

The film as a whole doesn’t help itself in being an almost carbon copy of last year’s the Banana Splits Movie, which was truly terrible, but somehow measured up against this effort makes it feel positively Best Picture Oscar worthy by comparison.

In truth, there’s a fine line between a cult film and a bad film, not that Willy’s World is that confused, as it clearly is one really bad film. Perhaps director Kevin Lewis, who it has to be said doesn’t have the best CV, wanted to embrace the cult angle, especially by having one of the most prolific cult actors on the planet in his film. But just by having Cage involved wasn’t enough. Nowhere near. Lewis shows no flare for directing in the slightest, delivering what is essentially a truly painful watch. And if the poorly executed horror elements don’t terrify you, the overall acting abilities of the cast will.

Considering the unquestionable talent Cage has, it is both curious and bizarre that he accepts so many roles where he almost parodies himself. It’s getting to the point that audiences will be unable to take him seriously until he starts to do that himself. And on this evidence, that may take some time.

There’s also the small matter of what feels like a highly dubious ending that intimates to a wholly inappropriate finale that should leave you uncomfortable.

Much like Cage’s character’s silent treatment, there are simply no words to describe how truly awful this film is. With no hint of creativity or imagination, it’s a slog you really shouldn’t put yourself through.

It also marks a new low in Cage’s career, and considering his poor choices of late, that’s some going.