There are romantic connotations to being marooned on a desert island; you can lay on a beach, drinking straight out of a coconut, feeling the breeze tickle underneath the fetching skirt you fashioned yourself out of palm leaves, all to the sound of the music to the classic sixties TV show The Adventures of Robinson Crusoe, playing on a loop in your head.

The reality is more likely to resemble an ugly episode of The Island without Bear Grylls, that will see you delirious with sunstroke, as you attempt to slap the mosquitoes attempting to bite you on existing bites on your flesh, now resembling bubble wrap, as the darkness once again draws in, bringing with it fear and dread.

This new game somehow crafts both of these very different scenarios together, for a beautiful and challenging experience. 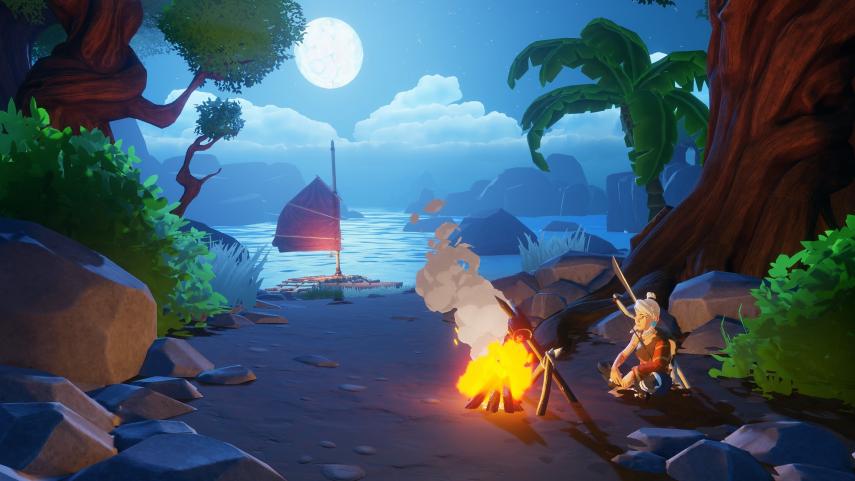 Fish again. I wish Deliveroo was available here, I really fancy a Nandos.

Waking up on a small island is Kara, a young woman shipwrecked in foreign climes. Using her savvy, she crafts together a few simple tools to keep her alive, as she begins to explore her surroundings.

As she progresses, not only does she find more resources to craft even more things with, including a craft, but she learns more about her surroundings, and, more importantly, how to find her way home.

Windbound is the gaming equivalent of The Itchy and Scratchy Show; visually it’s a bright and bold animated world, full of colour, but just beneath the surface is a story of imminent death and survival.

Playing as Kara is an intriguing experience. Before you embark on your adventure, you are offered one of two methods to play – survivalist or storyteller. Having already been forewarned of how difficult it can be, there really only was one option to choose. 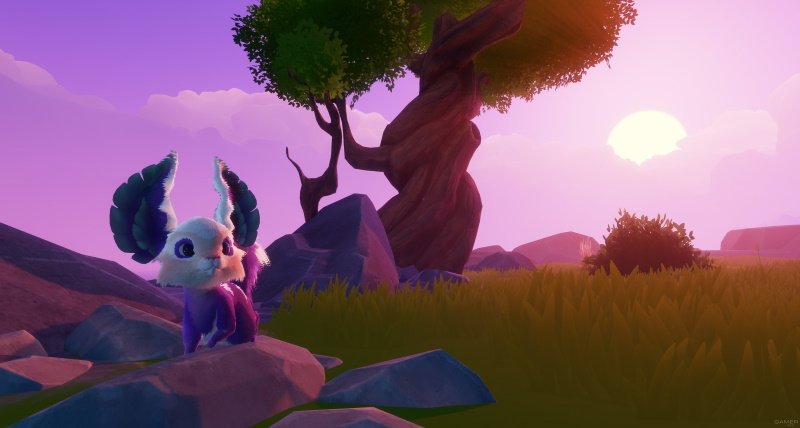 To think, I gave up being in the next Pokemon game for this. Sigh...

But unlike the dichotomy between the game’s visuals and playing style, it seems the developer 5 Lives Studio don’t really feel there’s much difference between the surviving and storytelling; we can only assume that they have more in keeping with Tom Hardy doing Jackanory, rather than Bernard Cribbins.

Despite the whimsical title, you still only have one life in storytelling mode. So when you’re dead, well, RIP. And as we found out, when you start again, you literally start from the beginning. Sure, in this mode you’re allowed to keep the inventory you died with, it’s still a blow to have to start all over, especially if like us, if you find yourself only minutes from completing the level, but more of that later.

Then there’s the crafting aspect of the game. Some gamers get quickly tired of the format, but we’re not averse to getting creative and knocking up implements and weapons when necessary. The issue here however is that whatever you create, doesn’t last forever. So if you craft a spear for instance, its effectiveness will degrade to the point where it is no longer functional. Yes, your spear is now an ex-spear.

You then have to knock up another one, but only if you have the resources for it on you. This may be a slightly bigger issue than normal, as if the developers haven’t made this challenging enough, you can only carry so much at any given time. When it rains...you get very wet indeed, as there’s no chance in hell you’ve got room to carry an umbrella.

It’s games like this make us clench our buttocks tight throughout, which doesn’t make for an enjoyable gaming experience. However, with the world looking so pretty, it would be rude not to explore a little.

And there’s plenty to explore. The initial islands are small enough to traverse on foot, with many populated with various creatures. The general rule of thumb we played to was if the animal was bigger than our character, it would be best to stay clear. Anything that looked, small and pet-like however, was fair game.

You will need to enter into combat with these island critters if you want to progress. So it’s disappointing that the combat system is so vague. If you’re expecting a lock-on system for your said spear, then this really isn’t the game for you. That said, there is some weird range finder for the catapult weapon, but everything about it is hit and miss.

It’s only once you’ve killed something, relatively small admittedly, added it to your inventory, basking in the knowledge that you have the strength to overcome anything, that the game delivers yet another nail for your coffin – much like the items you create, the meat you carry with you degrades and goes off over time. That’s just what we want from a fun, colourful game, the constant reminder of how fleeting life is.

Having crafted a boat, it felt right to go exploring, with clenched buttocks, to other areas, where we managed to operate beacons, a main directive of the game, as once you’ve got three going, it effectively means you’ve completely the level and are ready for the next.

We had actually managed to get all three beacons operational, and considering the uphill struggles this game offers, decided to take a moment and bask in our achievement, before heading over to the island to finish the level. This consisted of having a wee barbecue on the beach, where we also dried a few animal skins for later. As we sat there, appreciating the glow from the warm embers in front of us, we suddenly noticed our health bar degrading. Nothing was attacking us, so we thought perhaps we were sitting too close to the fire and had accidently set ourselves on fire. So we popped in the sea for a gentle swim. And still our health bar dropped. He returned to the empty beach to dry off from our impromptu swim, as our health bar continued to drop.

And then we died.

We died on that beach, with no warning whatsoever. We died on that beach in “storytelling” mode. We have died many deaths in various virtual worlds, but none have hurt quite as much as this one did. It was at this point that we realised that we had to go back to the very start of the game, like the cruellest of Groundhog days. The whole scenario unlocked a rage seldom seen, that found us cursing every member of the team of developers, and their lineage from here on in. And after the curses ceased, we vowed never to step back on that stupid island ever again. And then we did.

Having come so very close to completing the level, we owed it to ourselves to find some pride, and a modicum of grit, and finish this level – the very first - which we did. We were certainly helped by the fact that we had a better understanding of what we were doing, and more importantly, the consequences of our actions, and by the fact that it was such an adorable world to explore.

And even though we did basically did everything the same as first time around, we didn’t die from unknown circumstances, which was something.

To say that Windbound won’t be everyone’s cup of chai, is an understatement. It’s twisted combination of The Legend of Zelda: Wind Waker cutesy graphics and sailing adventures mixed with a hardcore survival sim will make it a challenge too far for many gamers, including us.

Certainly Storytelling mode was a stressful experience, so it’s anyone’s guess how brutal Survivalist mode is, not for wimps such as ourselves, that’s for sure.

Perhaps the developers should have given gamers some slack, because there’s no shame in making a game you’ve spent years working on, not only appealing, but accessible.

Windbound is a title that lures you in with its attractive visuals, only to have you quickly fighting for your life constantly. If you consider yourself hardcore, then Windbound is a challenging title you can quickly get on board with. For casual gamers however, with its outrageously hard difficulty settings, it’s probably one to best steer well clear of.