Mario & Sonic at the Winter Olympics

In 2007, Sega saw gold when they put a certain plumber and blue hedgehog in the same game, for the very first time.

In an attempt to replicate that success  and to be honest why wouldnt they, as its virtually a license to print their own money, with Marios head on one side and Sonics on the other  the pair and their entourage have packed their bags for Vancouver, where the 2010 Winter Olympics will be held.

So as before, there are a number of different games to take part in (25 in all), but instead of track and field disciplines you get, well, more snow/ice themed games, in keeping with it being the Winter Games. Which makes sense, when you think about it. 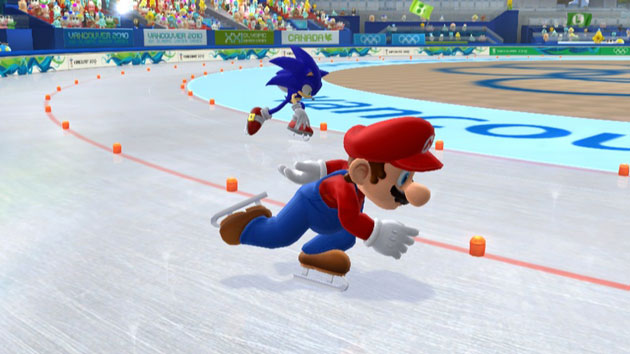 And I thought you were supposed to be the fast one? Put a bit of weight on, have we Hedgy?

A criticism that was levelled at their Summer outing was that many of the games were too similar to one another  most notably the track events; lets face it, one running event is pretty much the same as any other. Here though, theres definitely a better balance of events. These include alpine skiing, ice hockey, speed skating, bobsleigh, figure skating, skeleton, freestyle skiing moguls, snowboard cross and halfpipe.

To begin with you can start with Festival mode  where you participate in all of the games, as well as training for them, over a two week period or so. If you just one to focus on one or two games for a quick session, then you can pick and choose from all the events currently unlocked in the Single Match mode.

There is a training mode option also given, but you really neednt bother with it, as you will either have to go through them again in Festival mode, or you have the option to find out what the rules, controls etc are for each event when you play it anyway.

When it comes to choosing your character, youve quite a roster to pick from  over twenty. Unfortunately, unless youre a devoted Sonic fan, half of them will mean nothing to you. Who can forget such great characters as Amy Rose, Metal Sonic, Shadow, Silver, Blaze, Knuckles and Vector? Well, we had. Thankfully Marios list of characters is slightly more memorable, with Luigi, Waluigi, Yoshi, Wario, Bowser, Bowser Jnr, Peach and Daisy all on his team. They come with their own set of strengths and weaknesses; however, any differences feel minor when playing with them. Having said that, we played through the entire game as Mario  hey, itsa Mario after all. And if none of those names grab you by the snowballs, you can even choose any one of your Mii characters to join in.

Definitely a big draw of the game is the ability to have up to four friends playing in three different multiplayer modes: versus  where everyone plays each other; Team Versus - where you can play 2 on 2; or Co-op play  where obviously everyone plays on the same team. But of course if you have no friends, you can play by yourself. 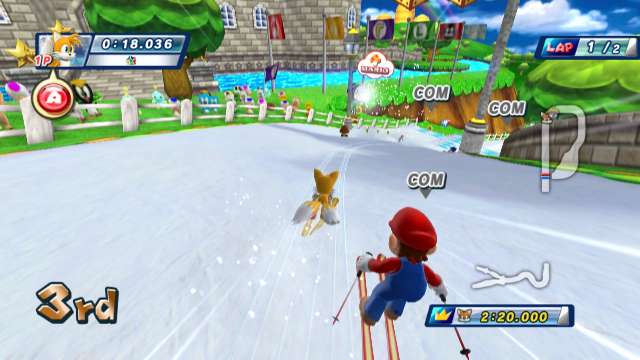 I'm getting a strong sense of deja vu. Didn't I park my kart somewhere around here?

Once again though, there is no online play, which is simply borderline disgraceful. You can connect to the www however and see how you rate on either a local or global leaderboard; that said, when we attempted this, time stood still for what seemed like half a lifetime, thus severely culling any curiosity we might have had.

On to the games then. There are actually two types: Olympic games and Dream Event games. The Olympic ones are all great fun to play. Come to think of it, there isnt one duff event that we found ourselves avoiding, which is pretty impressive. Oh wait a minute, we did find the Mogul skiing events fairly tiresome, but this might be down to the fact that we couldnt get the hang of it more than anything.

Alpine skiing brought back happy memories of playing the 1980 Skiing game on the Atari 2600. The perspective may have changed, but the idea of skiing slalom through gates is still hugely enjoyable.

And the ski jumping event stirred the retro pot too, reminding us of Sunday afternoons planted in front of the TV watching Ski Sunday. Remember the theme tune? If you do, youll probably find yourself humming it incessantly all day now. Really, theres no need to thank us. Who knows, having it rolling around inside your head whilst playing this may make you that little bit quicker? But it probably wont.

A real highlight is Ice Hockey. Its almost worth the price of admission on its own. Its by no means a serious sports sim, but it doesnt stop it from being a real joy to play.

One guilty pleasure that has to be owned up to was the Figure Skating event. Theres music, theres rhythm, theres passion... the only things missing are the Bolero and Torvill & Dean. Admittedly its not going to win any awards for being the butchest event, but its not difficult to be won over by its charm and uniqueness. If only we could have got Mario into a sequined outfit.

Another stroke of genius is the Curling. Again its very simple to play, but can quickly become highly competitive if playing with friends.

And just when you think its all over and youve played through all the games in Festival mode, you realise that theres also the Dream Events to tackle.

These are pretty much the same mechanics as many of the Olympic games, but theyve been Mario & Sonic-fied. For example, Ice Hockey now takes place at Bowers Castle, with a clutter of power-ups to help you gain advantage on the ice. The Dream Alpine event sees you compete down a hill that pays homage to Sonics Green Hills stage, with pinball-style bouncers to put you off your stride. 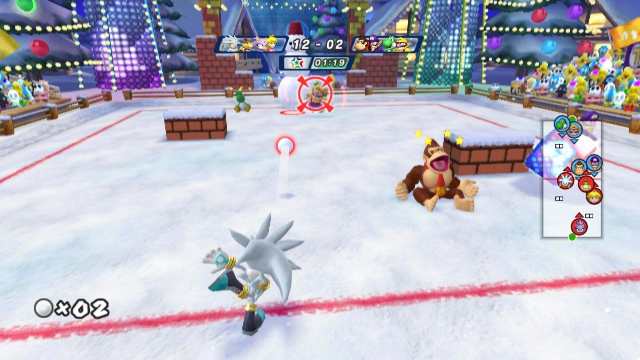 Not only are you fat, you're ugly too - take that!

Theres one totally unique Dream Event which is Snowball fighting. Its a little bit silly, but again, theres a real thrill at aiming snowballs at your opponents and throwing them in their faces.

For Olympic Games purists, these events may be pushing the boundaries of reality a tad too far. But if thats the case, maybe you should remember that youre playing as, amongst others, an overweight Italian plumber, blue hedgehog etc.

The game isnt MotionPlus friendly, which we thought would be a hindrance. However, the good ole wiimote and nunchuk work extremely well, giving you just the right amount of control throughout.

Another bonus has to be the fact you can use the Balance board for 14 of the events. If you can find yours, its well worth giving it a good dusting down, as again, the level of control using it is surprisingly accurate. From standing on it normally for skiing events, to turning it length-wise for snowboarding, to simply sitting on it for the toboggan/skeleton. Listen, you know, we know and Sega know that bringing these iconic characters together is just the mother of all cash cows; you can almost hear it mooing crazily all the way to the bank, probably snacking on gold coins along the way. And if it was a terrible game, it would give us even more reason for hating them and doing this to us.

But the facts are this: you are unlikely to find a more enjoyable title this year, where all the family can join in, with a guaranteed good time had by all. Its creative, varied, intuitive controls and simply a blast to play.

It has options galore, and even if you mange to win gold on all events  which isnt that difficult, it will always draw you back to beat family and friends high scores, as well as all its multiplayer loveliness.

All we can say is, let the games begin.