You can say what you like about the Russians - actually best not, as they’re probably listening in with their spying devices.

What is fairly safe to say is that they make a good, dependable enemy, for Hollywood that is. Sure, in recent times it’s dabbled with Eastern Europeans, but they’re just a poor substitute for the real deal.

And no-one knew that more than Tom Clancy; after selling his first novel The Hunt for Red October, which was quickly snapped up by Hollywood and made into a film in 1990 starring Sean Connery and Alec Baldwin, he quickly became the go to guy for the spy thriller. Not only that, but he also put his name to a successful run of military-themed video games, including Splinter Cell, Ghost Recon and Rainbow Six. Not bad for an ex insurance salesman with no military background.

With Amazon already enjoying success with Tom Clancy’s Jack Ryan starring John Krasinksi in the titular role on their Prime Video service, with a third series already commissioned, it’s no wonder they jumped at the chance of grabbing another of his characters, with hot property Michael B. Jordan in the lead. 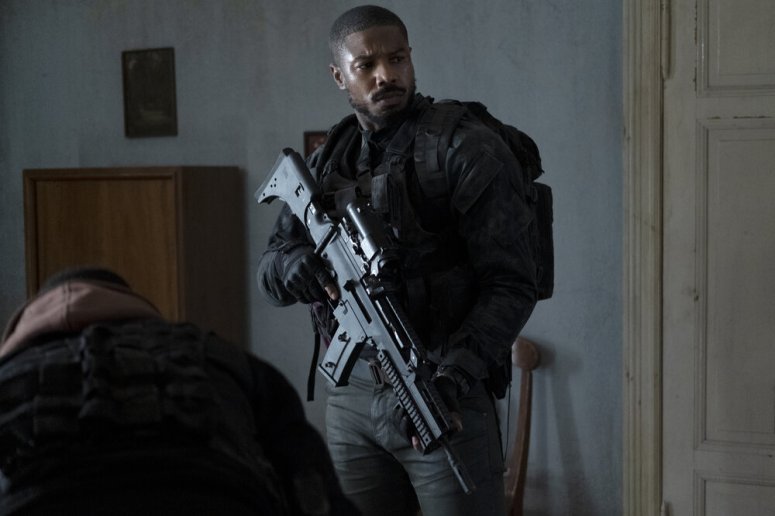 Now try telling me again, who's the sexiest man alive this year?

On a particularly dangerous mission in Aleppo, Syria is John Clark (Jordan) and his Special Ops unit. They’re tasked with recovering a CIA agent who was taken by Russian military forces, which they manage to do successfully.

Three months later, home with his wife and soon to be born baby, John is contemplating retirement from the military, in favour of a slightly less risky position in the private security sector. His mind is quickly changed however when not only his unit or killed, but they also go after his family.

He is in no doubt that it is the Russians getting payback, and he wants whoever did it to get the same treatment, so he and another unit set out on another tour with this in mind. But as they focus on their target, it soon dawns on Clark that maybe Russia aren’t the only enemy at play here.

Yeah bitch I am the cabin crew, what of it?

So, you take one of the biggest names in Hollywood, and get him to star in a film written by Tom Clancy, what could go wrong? Well, you would have to ask Italian director Stefano Sollima that question, because in his hands, it appears quite a lot.

Although Clancy has a proven track record for his stories being made into films, Sollima has shot a script that is so wishy washy and predictable, it’s kind of a surprise that no one said anything at the time of shooting. Granted, his action set pieces have the thrill element and are surprisingly entertaining. It’s all the bits around them though that are so dry and pedestrian.

Jordan is a major talent, without question, but he is completed wasted here, delivering nothing more than a 2D performance throughout. So much so that the video game version of Clancy’s Sam Fisher has more personality about him, and that’s saying something.

And by making it blatantly obvious to an audience where the story is going to go, it takes any kind of thrill from this spy thriller, leaving, well not very much at all.

What could be more troubling is the fact that a sequel is due, featuring Rainbow Six, the sequel to Clancy’s 1993 released Without Remorse, that has also gone on to be a hugely successful gaming franchise with over twenty titles released, with Jordan reprising his role here. Let’s hope they learn their lessons from this disappointing effort and perhaps take a peek at some of Jack Ryan’s previous screen adventures for inspiration, as they could well learn a thing or too about successful spying from there.