You would have had to have wrapped yourself from head to toe in tin foil (which would be troubling on so many fronts) not to be aware of the current stories regarding climate change regularly in the news.

Obviously the issue is far from new, but with so many stories that are cyclical as far as broadcast news agenda is concerned, climate change is once again near the top of the melting ice pile.

This Icelandic film, the second to be written and directed by Benedikt Erlingsson, focuses on one woman’s fight literally against the power. 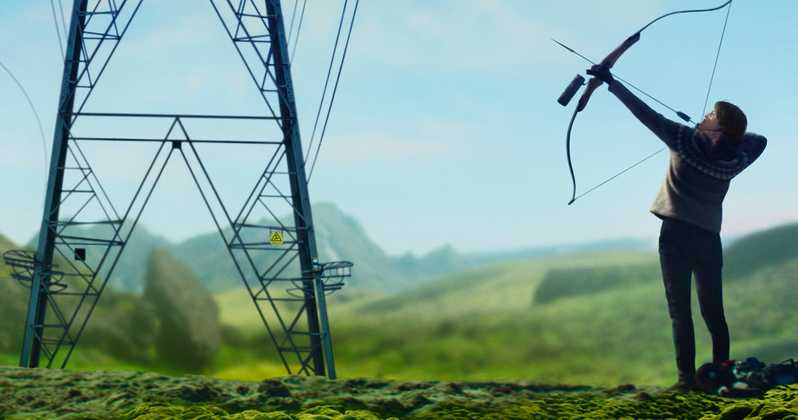 When you look at the life of Halla (Halldóra Geirharðsdóttir), who works as a choir conductor, nothing about it appears all that threatening. Look a little closer however, and you will see a gritty, determined woman, who is prepared to go above and beyond for her principles.

She is passionate about the land she lives on, and isn’t happy what the politicians plan for it. But where many do nothing about it, she is proactive, and like an eco ninja, becomes a thorn in the government’s side.

While planning her next attack, she receives a letter, out of the blue, stating that her application for adoption, that she made four years ago, has been successful. It reminds her of dreams she once had of becoming a mother, but can she still be that and the eco warrior she has since become?

I bet Meryl Streep never had to do this kind of shit.

Erlingsson’s film, considering its socio-political theme, is surprisingly whimsical. The character Halla, although presented as a Rambo with green credentials, is often not only accompanied by music wherever she goes, but a physical three-piece band. With such surreal silliness taking place, however welcome, it does dampen the green message somewhat.

As does the recurring foreign character, who unfortunately for him, always seems to be in the wrong place at the wrong time.

And as the film progresses, the second element of the film, concerning the adoption of the young Ukrainian girl, also muddies the film’s point about climate change, to the extent that by the film’s ending, much like in real life, it's fallen down the agenda.

Perhaps the film is attempting to take on too much, and in doing so, does neither storyline any real service.

As cluttered as it is however, the natural performances, bleak Icelandic background and the almost Kusturica use of music, make this one woman war one worth signing up for.

***Fancy winning a copy of this title? Then you should enter our competition, for your chance to win a copy on DVD. Click here to enter.***