Considering the last twelve months everyone around the globe has endured, it’s not difficult to choose a better year in history, and 1984 certainly had its moments. It was the year that saw Ghostbusters, Gremlins, The Karate Kid, Terminator all released, as well as the greatest mockumentary of all time This is Spinal Tap.

It was also the year that saw Michael Jackson’s album Thriller released, as well as Bruce Springsteen’s Born in the USA, Sade’s Diamond Life and Frankie Goes to Hollywood’s debut LP Welcome to the Pleasuredome.

So having a big budget film being released for the home market, a superhero flick no less, with more than a dash of nostalgia about being set in a decent year, seems just the thing during these trying times. 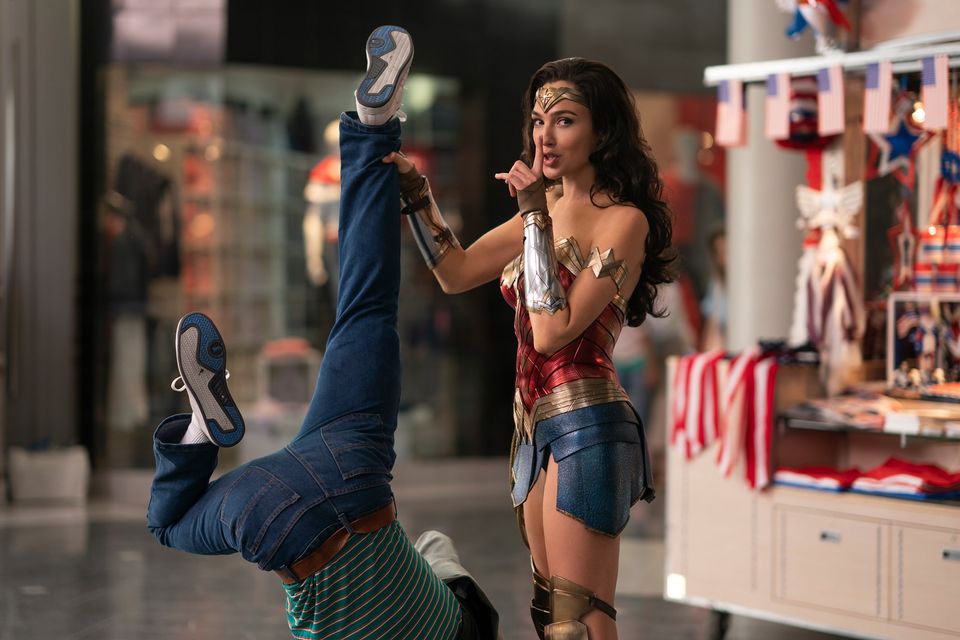 It’s 1984 and Diana Prince (Gal Gadot), AKA Wonder Woman, is working at the world renowned Smithsonian Institution in Washington, DC. Being employed by the museum is the perfect cover for the superhero, as she also happens to know her history.

When a new employee arrives, Barbara Minerva (Kristen Wiig), a shy geologist and crypto-zoologist she is keen to make new friends, with Diana being one of them. Barbara soon finds herself being asked by the FBI to examine some artefacts that were recently stolen. One of them, an object dubbed a dreamstone, grabs the attention of both Diana and a failing businessman, Maxwell Lord (Pedro Pascal). It is an ancient artefact that grants whomever holding it a wish, and with that kind of power in the world, it has the ability to change everything, which Diana, Barbara and Maxwell all quickly realise.

It's worse than I thought, they're destroying all my Wonder Woman Barbie dolls merch.

As introductions to a franchise goes, Wonder Woman’s intro into the DCU in Zack Snyder’s 2016 Batman V Superman: Dawn of Justice was certainly an impressive one. It hinted at greater things to come, but sadly they just didn’t materialise, neither in her first solo gig, or this disappointing sequel.

Nearly everything about this film is a disaster. The story, for starters is as woolly as it gets. Part of the problem is the fact that the world Wonder Woman exists is in, isn’t a very familiar one. A film like this then makes perfect sense, with the intent of doing just that for audiences, but the result is all too familiar and clichéd. It certainly borrows far too much from Superman’s world, particularly with her relationship with Steve, played by Chris Pine, being rekindled, that just echoes that of Lois and Clark’s.

Then there’s Pascal’s character who is just another version of Lex Luther, a character who quickly becomes consumed by the power that comes his way. Finally there’s Barbara Minerva, who after making a wish to become like Diana, develops her powers, which then makes her a female version of Zod, a supervillain who just so happens to have the same powers of superman. It’s a thin line between paying homage and just struggling to develop an original idea of your own, and this film jumps that line by some distance.

It’s not helped by a truly awful villain in Lord, whom Marvel (owner of Marvel) must have been splitting their sides from laughing so much to learn that the so-called Dreamstone was simply Aladdin’s lamp by another name. The only real surprise the film offers is the omission of the song “A Whole New World”.

It’s also troubling on a few other fronts, one of which is the portrayal of its female characters, which is shocking when you consider its main protagonist. As the name suggests Wonder Woman is pretty impressive; she’s strong, has a cool lasso, and can seriously kick ass. Here though, she has one Achilles heel, that of a love for a man. Despite being an Amazonian princess, even she isn’t complete without a man in her life. Although the film is set in 1984, we have moved on since then, or it appears at least some of us have – clearly not enough of us.

A similar appalling example would be that of Wiig’s character Barbara; when we are introduced to her she is a super intelligent woman, who has clearly worked hard to get where she has, but it’s not enough as men don’t appreciate her because she is timid, doesn’t wear high heels or tight-fitting outfits. This attitude changes however when her wish comes true, and men suddenly find her more attractive when she conforms to their limited notion of sexuality. Sure a woman can be smart, but what will make her really sexy is a figure-hugging dress.

These portrayals of women would be abhorrent if directed by a man, so it’s made more puzzling that Patty Jenkins agreed to adhere to such dated stereotypes.

And then there’s the setting of 1984 itself; Jenkins commits to having some fun with the time period for about twenty minutes early on, and then just completely ignores it from that point on. There was certainly more fun that could have been had from it, but it’s pretty much dropped as quickly as it arrives.

Then add the fact that the CGI often comes across as unimpressive in places, and the film is most definitely an hour too long, coming in as it does at a ridiculous running time of two and a half hours, and the result is nothing other than a complete waste of time.

What makes it worse is that Gal Gadot is perfect casting to play Diana Prince, and so deserves so much more from the character and the franchise, as we all do.

There’s never been a more appropriate time in history for superheroes to swoop onto our screens, big or small, to save the day. With this release however, Wonder Woman 1984 has let herself down, and the entire planet, with what is a poorly executed, naive attempt at a contemporary take on the superhero genre.

1984 may well indeed have been a great year for many things, but as this film painfully proves, just not for Wonder Woman.