A Beautiful Day in the Neighborhood

Considering how impressionable the minds of the very young are, it’s a huge responsibility when it comes to entertaining them.

When you get it right, you instil memories in them that last a lifetime, getting wrong, and it could be years of therapy. Take Emu for instance; never has there been a more violent and disturbing character on children’s TV. And don’t even get us started on Pob.

In the states, A TV show that became an institution for youngsters was Mister Rogers’ Neighborhood, that featured puppets (and yes, some on the rather scary side), music, and Fred Rogers himself, as the one grown up kids could relate too. So you're trying to say you're not American? You're Welsh? What is...Welsh?

When his editor calls him into her office, she has a different kind of assignment for him. The magazine are running a number of pieces on heroes, and they have one they want Lloyd to interview. Although he’s far from happy doing a small ‘puff’ piece, as he calls it, he accepts. Things have been difficult of late, particularly with the unwanted arrival of his father (Chris Cooper), so he can do with the break.

So Lloyd packs his bags and heads off for Pittsburgh. He’s there to meet TV icon Fred Rogers (Tom Hanks), who has been presenting a children’s show there for a number of years.

After managing to grab some time with him, Lloyd isn’t entirely convinced if Fred’s genuine or not, so decides to keep going with the story.

As he spends more time in his company, Lloyd starts to get the impression that Fred may well be the one doing the interviewing in this relationship. 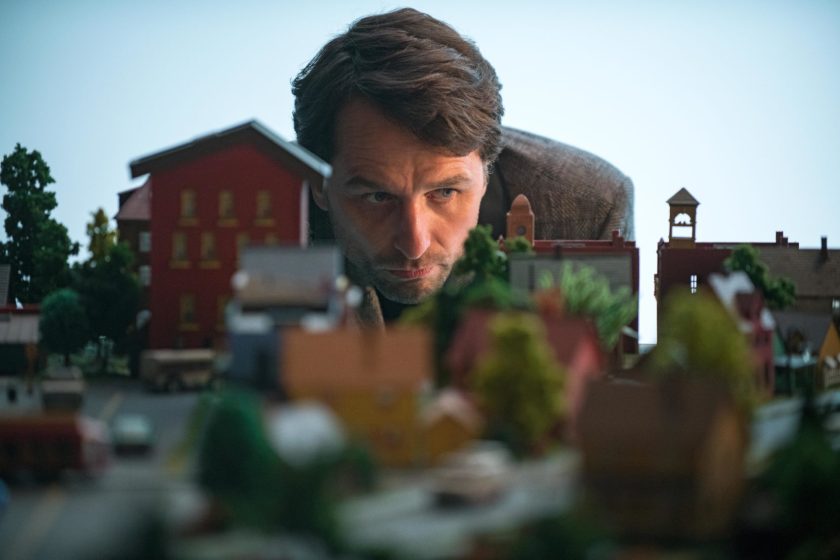 I know they had to scale down on the budget for locations, but this may be taking it too far.

With the last film that she directed being the Oscar nominated Can You Ever Forgive me?, there must have been some pressure on Marielle Heller for her follow up project. When she secured Hanks for it in the lead, the pressure must have eased, for sure. It’s strange then that its Hanks’ contribution that is the most troubling.

It should be stated from the off that this film is not a biography of Fred Rogers. And although it’s billed as the meeting of a journalist writing a piece on the influential children’s TV presenter - which happened in real life - it’s more about his affect on the cynical Lloyd personally.

So, just as Lloyd realises that the piece he’s writing is actually about himself rather than Fred, the audience realise the same can be said about the film. And on that level, it works a treat. With all his time seemingly wrapped up in the excellent TV show The Americans, Rhys has had little time to do anything else, never mind star in films. Here he delivers a strong, personable performance, which will hopefully mean we’ll be seeing more of him on the big screen in the future.

And then there’s Tom Hanks. There’s no denying he’s given a truthful account of the real Rogers, it’s just a shame it couldn’t have been slightly less sinister and creepy. When Hanks has his hand up a puppet, talking to it, the film almost resembles a horror flick, with the possibility of the puppet revealing a small kitchen knife at any moment. If you’ve always had a mistrust of children’s TV presenters, this won’t change that.

Also, it would have been nice to have a little more background on Rogers; although it’s not a bio, it would have helped to have an insight into his upbringing and development, as to what shaped the man he became. If you want to know more about the man himself, then perhaps 2018’a documentary Won’t You be my Neighbor? is for you.

That said, the film certainly has its charm, aided by a few playful visual elements that Heller uses throughout, rooting it sweetly to the TV show itself.

The relationship between the two protagonists is certainly a fascinating one, it’s just a shame that Hanks comes across as so darn creepy.

***Fancy winning a copy of this title? Then enter our competition! For your chance to win a copy on DVD, Click here to enter.***