There’s no doubting that being the president of the US of A can be a challenging position, but it certainly seems to be doubly so when Gerard Butler is around.

Since Butler starred as Secret Service man Mike Banning in 2013’s Olympus Has Fallen bad things have happened to the man in the top job whenever Banning is employed. And yet no-one has seen a correlation and continue to hire him. So much so, he’s actually in line for a promotion in this latest outing.

I swear the next bad reviewer is gonna get it!!!

After his adventures in London, Mike Banning (Butler) is back on familiar ground, back in Washington DC, serving President Trumball (Morgan Freeman). Working in the Secret Service has taken its toll on his body however, as Banning now founds himself popping pain pills to get through the day.

This gives him a dilemma when the President offers him the job of Head of Secret Service. Banning has little time to mull over the offer however, as an unknown force makes a play to take out the President and his detail, which finds both of them in hospital.

When Banning comes to, he’s accused of working for Russia, as they’ve found an account of his with a recent transaction of ten million bucks deposited into it. Knowing he’s been set up, Banning begins to go about clearing his name, and soon discovers that the real enemy is far closer to home. 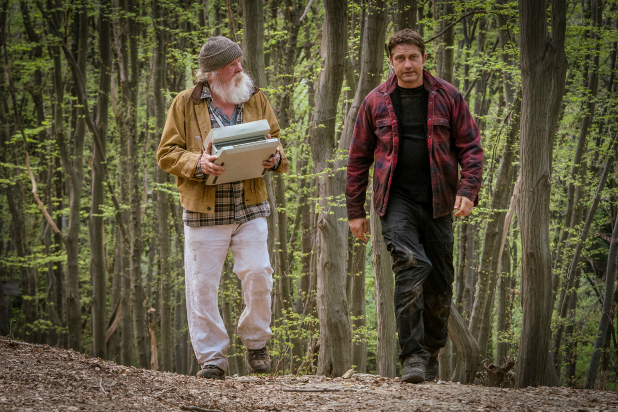 Honestly, this little baby is going to revolutionise writing!

After the truly woeful antics in the abysmal London Has Fallen, the franchise wisely returned to more familiar ground for this third outing in the franchise.

In doing so, this is a far better adventure, and yet it still manages to stumble with some self-made pitfalls; the most obvious of which is a storyline that is incredibly generic and predictable. The notion of a private army being used to support the national army has certainly been done before, and certainly with more flair. The script doesn’t help either by telegraphing the whole set-up within the first five minutes, leaving no room for the unexpected or unseen surprise.

Having done so well with his Shot Caller, director Ric Roman Waugh appears to be disappointingly out of his depth with this big screen affair. It’s about as cutting edge as an eighties action flick and with less muscle.

Even Butler appears borderline apologetic throughout, as he delivers a rather forlorn performance.

The film would have benefitted greatly from expanding on the relationship between Butler and Nick Nolte; this probably has more to do with the fact that it’s always good to see Nolte doing something, even if it is something as cheesy as this for the undoubtedly un-turn-downable paycheck. It’s a new element to the series and really should have been explored more.

The one thing that is clear from this instalment is that the franchise has clearly run its course. The last two outings has seen the series fall well below par, and there’s little chance of it ever getting up again. And the reality is, it really shouldn’t even bother, fingers crossed.