It was French film theorist André Bazin that wrote in the first volume of What is Cinema? “All films are born free and equal.”

Welcome to Film Studies 101. A place to understand the medium of film. Many may think that just by watching films you are a student, but that’s not the case.

To truly understand film, you must live it. You must read Bazin, watch Eisenstein’s Odessa Steps sequence (from Battleship Potemkin obvs) at least 88 times (for each step shown), have a poster of La Dolce Vita on your wall, drink homebrewed Dandelion beer, have a tattoo of a sled on your left arm and wear a cardigan every day of the year. And that’s just the beginning.

In French director Jean-Paul Civeyrac’s latest, he points his camera at a young man in search of cinematic truth.

If I close my eyes now, maybe he'll finally shut up.

Etienne (Andranic Manet) has just made the trip from his home of Lyon to the French capital, where he will get to study what he has a real passion for - film.

Not only is he leaving his long-term girlfriend Lucie (Diane Rouxel) behind, but all the comforts of home, as Paris is a complete mystery to him.

He soon settles down in student accommodation, sharing a flat with fellow student Valentina (Jenna Thiam), as well as meeting like-minded cineastes on his course. But having never lived away from home before, Etienne soon finds that he’s learning just as much about himself as he is film. 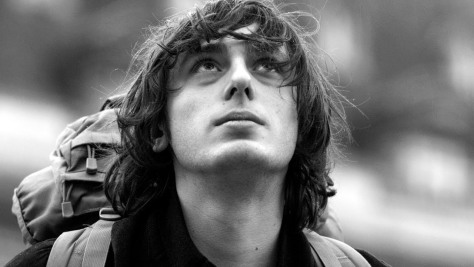 It somehow looked bigger on the internet...

From the opening scenes you know you’re in for a schooling with Civeyrac’s film because it’s shot entirely in black and white. Is this in reference to classic cinema, or merely a pretentious tool? Discuss.

The answer of course, is a mix of the two. The film certainly has traits of classic French cinema, with lots of discussions about film, as well as a number of naked romps in bed.

It also attempts to be more than that. It’s the examination of a young man finding himself – and yet not- as he struggles with relationships all around him. Where it struggles itself is with its leading young man; Manet lacks any real charisma and charm that a role like this in a very French film demands. His performance is flat, limp and distant, which may well be what the director was after, but it will leave audiences sorely wanting.

A film like this needs a star performance - if not an actual star itself - to convey the emotional rollercoaster the protagonist is riding. What Manet delivers is essentially a ride on the bumper cars, with his being the only vehicle on the metal plate circuit.

Civeyrac fares better from other members of his young cast, in particular with the female roles. They manage to tap into the passion that you expect from a film like this, lifting the film at times when it desperately needs it, which is sadly not often enough.

It may well follow in the cinematic footsteps of French classic greatness, it’s just a shame that it was unable to make the same kind of lasting impression.