Having helmed both Independence Day films and 1998’s Godzilla, Team Devlin and Emmerich have proved they know their way around a disaster flick. Unfortunately writer and producer Dean Devlin decided to go behind the camera for last year’s Geostorm, and proved us wrong.

He has to go some way then to redeem himself on the directing front, with this his second feature. But unlike his first stab, this isn’t a complete disaster.

How many times must I tell you? I've never seen Independence Day!!!

Sean (Robert Sheehan) is a cheeky, young Irishman, living in Portland, Oregon. He sees himself as a bit of a photographer, but when offered a job taking food pics, he turns it down for being too corporate. As a way of making money then, he and friend Derek (Carlito Olivero) run a scam at a restaurant.

They act as valets for the diners, but whilst they’re inside eating, one of them drives back to their presumably empty homes, and burgles them.

When some guy acting a complete dick drives up in a Maserati, they believe they’ve hit the jackpot. Sean drives back to his house, and begins to search it for the good stuff. He’s completely taken aback however when, in one of the rooms, he discovers a young, distressed woman gagged and heavily strapped in a chair. It transpires he truly is a dick, and then some. A killer dick, if you will.

When Sean gets a call from Derek, warning him that the Maserati guy Cale (David Tennant) is heading back home, he needs to get out quick. Thinking he doesn’t have time to set the strapped woman Kate (Kerry Condon) free, he promises her he’ll be back. But despite his best intentions, things don’t quite go to plan.

Cale learns of Sean’s meddling, and decides to turn the tables, which results in a deadly game of cat and mouse. 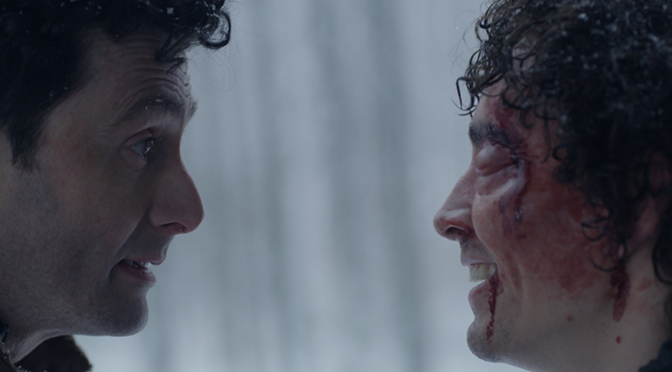 That's some nasty sunburn you have there. You should put some cream on it.

Devlin, somewhat wisely, leaves the disaster genre alone, in favour of something more Hitchcock inspired. And for the first third at least, it shows promise. The protagonist is soon put in an awkward position, facing a troubling dilemma – does he save the girl, or save himself?

Just as the film builds up an intriguing head of steam, it goes downhill with the introduction of baddie Tennant. Now Tennant is more than capable of giving a credible villainous turn, as anyone who has seen Jessica Jones can testify to, but oddly under-delivers here.

The problem is, is that his character isn’t fully developed, and with a weird back story that just doesn’t add up, what’s left is a less than satisfying villain. He needs to scare the proverbial poo out of an audience, to give him the necessary fear factor. Unfortunately he comes across as too smarmy and annoying, therefore falling way short of the mark. Ultimately he needed to be more American Psycho and less American Pie.

There is one great line however, deliciously delivered by Irish actress Condon, that comes completely out of leftfield, that is almost worth admission alone – almost, but not quite.

It’s a film that has a lot of potential, but sadly falls by the wayside soon enough due to a plodding plot, and a baddie who just isn’t baddie enough.