With the film franchise at least stuck in 007 limbo, it makes sense to dust down everyones favourite spy and send him out on new virtual missions. It also makes a refreshing change that Blood Stone isnt one of those rushed out, tired film tie-in jobbies. But does Bond have what it takes to not only take on the world, but also the likes of Call of Duty: Black Ops?

Daniel Craig might not be slipping back into those Speedos any time soon for the next big screen Bond outing, but his likeness at least gets to go globe-trotting in an all-new story written by Bruce Feirstein, who wrote the screenplay for Tomorrow Never Dies as well as co-scripted Goldeneye and The World is not Enough. So its about as authentic a Bond experience as you can get. Or so you would think.

The plot is highly reminiscent of a Bond film in the sense that youre not really sure whats going on, but dont really care as youre being sent around the globe (at the tax-payers expense?) to track down bad guys who want to do bad things. 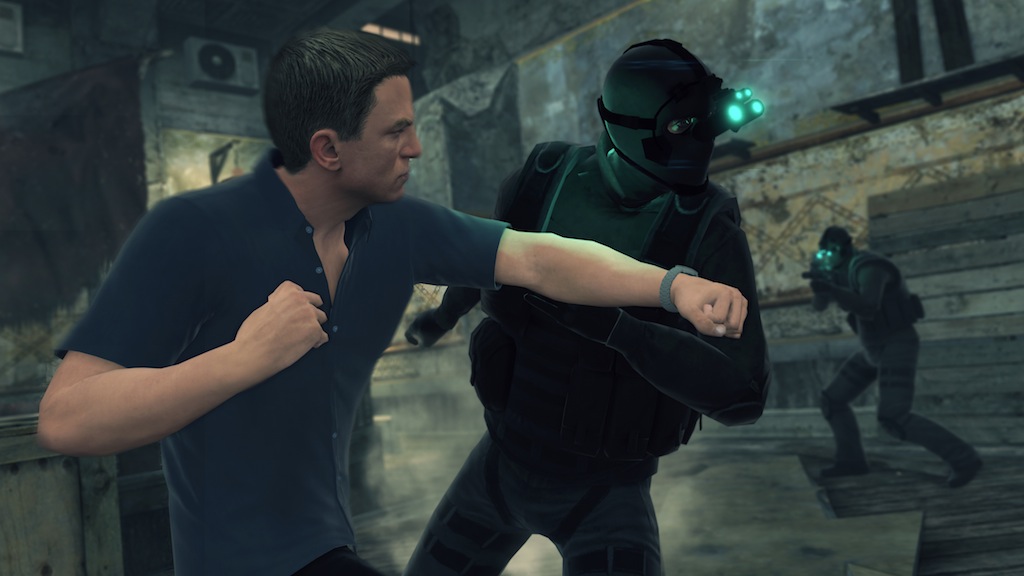 Listen Sam Fisher, I'd appreciate it if you'd sod off back to your own game. And quietly does it, there's a good chap.

One of the most unusual things about the game is when you come across wealthy jewellery designer Nicole Hunter. Hunter is played by Joss Stone, who, mostly known for her singing, likes to dabble with a little acting from time to time, like appearing in the third series of The Tudors as Anne of Cleves. Whether its always been a dream of hers to be a Bond girl isnt clear; perhaps shes playing it rather canny and using her performance here as a calling card for the next screen outing for Bond. If thats the case, dont call us...

The arsenal of weaponry at his disposal feels a little ropey; like most games of this ilk, once youve got a taste for one type of weapon, youre probably likely to stick with it throughout the whole campaign.

And considering hes Bond, hes a little light on gadgetry too. Basically he carries a very smart phone, which highlights where the enemy is when theyre closing in, as well as where your objective is. This comes in handy if you ever get lost as you always know which direction youre supposed to be heading in.

Nothing stands out about the game-play either. Its all rather run-of-the-mill, cover and shoot stuff. They have included a focus aim system that will be eerily familiar to anyone whos played Splinter Cell Conviction, in that if you pull off a few sneak kills, you get the opportunity to use focus aim on your enemy and launch a guaranteed killer attack.

But its not all bang, bang youre dead, as there are a few welcome opportunities to get behind a wheel and take to the streets. Now considering Bizarre Creations developed this game, who were responsible for the impressive Project Gotham Racing series, youd expect the driving sections to be a highlight. And they are, if by highlight you mean dogs dinner. How a team lauded for their expertise of the driving genre could get a few driving sections so wrong is beyond reason.

A big problem is the controls; as youre unable to control the car with the PS3s d-pad, youre left having to keep it on the road with the left analogue stick. With every push it feels like youre controlling a block of ice on the road, as the vehicle slips and slides all over the place. There was a real opportunity to prove themselves here, but they blew it big style. And if recent reports are anything to go by, the developer has been shut down by its owner Activision. Ouch.

And then theres its length. Its outrageously short. It can easily be finished in two average sittings, or just the one if you really want to get it over and done with.

The game doesnt bomb on all fronts however. Graphically its quite attractive; it has a semi-cel-shading effect going on, that gives a kind of sixties vibe about the look. Despite not being terribly current, it actually works rather well. It certainly stands out from a busy crowd in that respect.

Getting Bond around is also quite painless. The hand-to-hand take-downs are all rendered well, and theres enough variety in them that stops them becoming too repetitive.

A big tick must also go in the soundtrack box; the orchestral backdrop to the plot only heightens the James Bond experience.

Its also difficult to recall the last time a stun gun was used to good effect in a game; its surprising that theyre not used more often.

And despite being inexcusably short, there are not only a few challenges that may entice you back for more, but theres also some fairly comprehensive multiplayer modes that at least dare to be a little different.

Bizarre Creations may have taken a bit of a hammering over this title, and yes, they probably bit off more than they could ever possibly chew. But there are a lot worse out there, which nearly all of us can testify to.

A little perspective should also be used; after all the James Bond game franchise peaked with just the one title  Rares classic Goldeneye for the N64 back in 1997. Since then Bond has been sent out on fairly mediocre missions with mixed results. If the franchise is to ever succeed again, it will need a huge overhaul.

Blood Stone had a lot of potential, its just a shame it didnt fulfil a lot of it. Its doubtful this will be the last we see of Mr Bond, but the gaming franchise at least will need a lot more thought given to it before he can trusted with a license to kill again.