Who the hell is Tina Fey? If that's a question you're asking yourself (or maybe even someone in your near vicinity) right now, then read on. 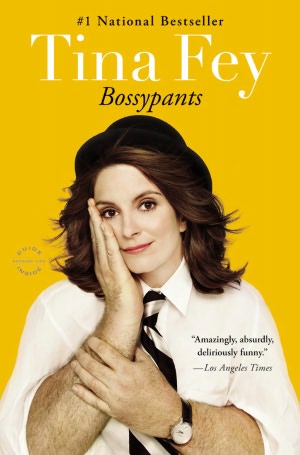 Tina Fey is known for three things: for being a member of the long-running US show Saturday Night Live; for being a dead ringer for the disturbing Republican known as Sarah Palin and impersonating her on said US show; and for being the face, legs and arms for Subway, as well as having a sandwich named after her  the Quattro Feymaggi. OK, this last one is a blatant lie, but it wouldn't be a surprise if Fey wanted this more than anything in the entire world. The real third thing that Fey is known for is the US comedy show 30 Rock, which she not only created, but also stars in as the affable Liz Lemon.

So with Saturday Night Live never really having taken off over here, and 30 Rock being an exclusive on Comedy Central (which is virtually the same as not airing in the UK as it's not a hugely popular channel) you can almost be forgiven for not knowing who Fey is.

The fact is, this is pretty damn good place to start. And as you'll soon find out for yourself after a handful of pages, Fey is the type of gal that you'd really like to get to know about.

It's probably all down to her likeability. In general, she's the type of woman who seems to take less notice of the really serious things in life. Instead, she focuses on the little things that grab her attention. She's a little like a female Rain Man with chubbier cheeks, in that respect.

Eighty percent autobiography and twenty percent self help book, Fey opens up about her private life, her professional life and all the bits inbetween; in particular, what it's like to be a funny woman in the gentlemen's club of TV executives. Actually, 'opens up' isn't quite accurate; because of her pleasing style (it's very pleasing indeed; she writes with such a witty warmth and charm it's like being wrapped up in a marshmallow duvet) it almost feels like she's actually writing about a fictional character in a fictional story, like a more adorable Bridget Jones. There's no doubt that what she's writing about is the truth, but she sounds almost too normal to be true.

If you do happen to be a fan of her show 30 Rock (in which case, good for you, you have excellent taste), then the book will be a far more entertaining experience. It's not a main focus of the book by any means, but when she dips into this period of her life, it's just that more vivid having seen the show. Perhaps the scarier aspect is that there seems little in the way of telling her apart from her Liz Lemon persona.

The only thing that she doesn't talk about is the film Date Night, and if you've been unfortunate enough to see it yourself, then you'll completely understand why.

They talk about books that are easy to pick up and difficult to put down and Bossypants is a great example. Fey demonstrates throughout why she really is the queen of comedy, and anyone else who claims to be is just full of it. Whatever 'it' might be.

Fey should be elected the President of Everything; then, life for everyone would surely be a whole lot better. The world would certainly be funnier. If only she looked like a crazed politician with whom she could be swapped in the dead of night...