As any COD vet will know, the games are littered with thoughtful quotes from a wealth of world leaders and eloquent soldiers. For some reason, the following wise words have yet to appear:

War war is stupid, and people are stupid, and love means nothing, in some strange quarters - Culture Club, The War Song, 1984

Unless youve been kidnapped by Somali pirates, you may have noticed that this title has stirred up a certain amount of controversy in the media. Its the latest in the Call of Duty series, produced by Infinity Ward. It is also the immediate sequel to their phenomenally successful 2007 release Call of Duty 4: Modern Warfare. As the title alludes to, it is a game about war, set in ye modern day times. 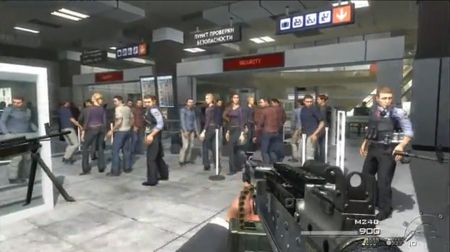 Well, they said that because it was hand luggage it wouldn't be a problem getting it through customs...

Its depiction of 21st century combat was brutal; cutting edge technology was used by the player to create as much death and destruction, set against a gripping story arc.

This is the long-awaited sequel to that game. Its no real surprise then, to find that this is also realised within todays theatre of war. And as Boy George rightly pointed out, War is stupid, what with all the killing and that. But for us gamers, thats what makes it so much fun. However, one particular level has caused a certain amount of outrage, but more of that later.

The level of anticipation for this title has been almost tangible, particularly if you happened to find yourself up to your eyeballs in cyber-drool in the darkest corners of certain gaming forums. Games this hyped very rarely match the euphoria surrounding them. This is, however, an exception.

Much has been made of the games cinematic feel, and how it cleverly draws you into the scene as well as the action. Its all true. However, in terms of a story, it all gets a bit clumsy. For starters, you dont play through the game as one particular character; instead, each level has a particular character assigned to it, who will, more often than not, pop up again in a later level. This makes it difficult to identify with one person, as they are constantly being chopped around. In turn, this makes it more difficult to maintain not only an ongoing relationship with any given character, but also the stories theyre involved in. 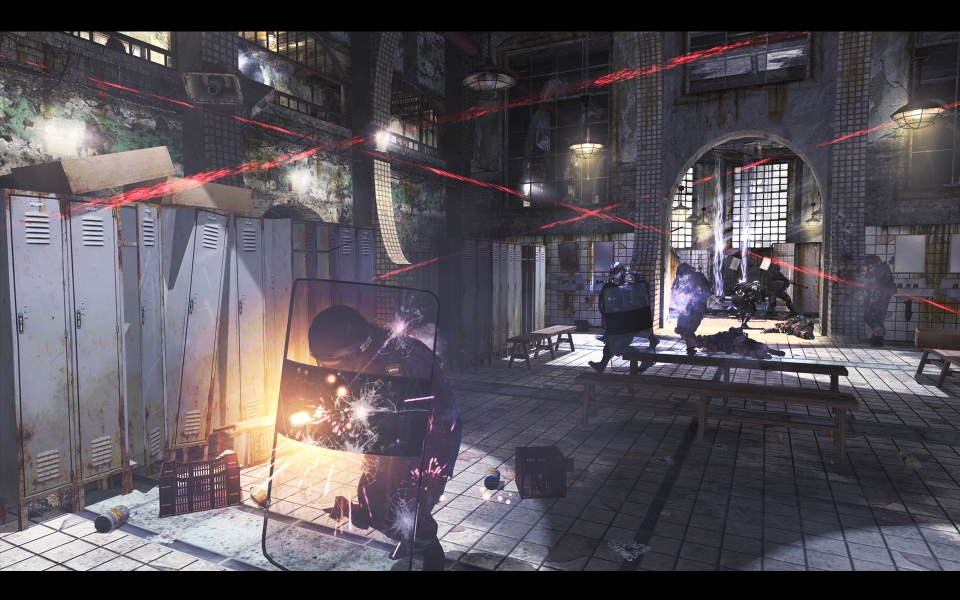 I'm sorry, but these Euro house clubs have really gone down hill.

But the truth is, when the game play is as solid as this, a cohesive story isnt essential. The solo campaign sees you fight it out in a number of locations, with each one being refreshingly different to the next. Youll find yourself fighting it out on rooftops, oil rigs, snowscapes, and you even find yourself in space briefly. Oh yes, and in an  ahem- airport.

So yes, much has been made of the now infamous airport level. You play an undercover agent who infiltrates a group of Russian terrorists, pretending to be Americans, who open fire on passers-by in the Russian airport. The hoo-ha in the press revolves around the moral issue of shooting innocent people, without any remorse. The key point that they appear to ignore is this  they arent real people. Sure, in the game theyre real, but it is just a game. If you feel bad mowing any of them down, and then decide to send flowers to their family, youll be out of luck, because, well, they dont exist. This is because you may well have murdered their entire family  oops  or simply down to the fact that they only existed in a shiny, whirring disc inside your console.

For the record, you can get by without letting off a shot. But thats not the approach we took. In fact there are two words that can best describe our emotional state in this controversial level, and they are trigger and happy. Remember people, its only a game.

Compared to the first Modern Warfare game, there are just a few extra camouflaged bells and whistles. In terms of the single player, you can now wield two weapons at a time, albeit hand guns, but as soon as we got them in our mitts, we normally dumped them for something heftier. There are a few vehicle levels included, mainly on a snowmobile and a dinghy. Both fit into the series remarkably well, even if their inclusion is a little on the brief side.

There is of course, a rather lovely arsenal of weapons at your disposal, to suit all tastes. Theres also a nice little carry case device that can be opened from time to time that can call in a bomb strike where you get to choose where it lands. And if you enjoyed using the riot shield in Uncharted 2, you can also pick one up here to, but only if youre a real wuss.

The only real downside to the solo campaign is its length. We completed it in just over 8 hours, which was played at a nice casual pace, allowing a little extra time for some sight-seeing. However, playing it on a harder level does add replay value, and is certainly worth it if you missed the odd bits and pieces.

The other nag is that you are rather shepherded around levels, with little room for exploring on your own. It would have been nice to be able to let go of a grown-up squaddys hand and go dark for a bit.

Overall though, its a thrilling adventure from beginning to end, with some superbly executed set pieces, making it feel almost like the best James Bond game ever made.

But just like a cat with fleas, Modern Warfare 2 just keeps on giving.

A new addition to the franchise is a Special Ops section. Here is a selection of missions/time trials etc taken from different levels of the game, which includes single player and two player co-op modes. Missions are unlocked with stars, with one star being easy, two medium, and surprise surprise, three hard. If youre one of these gamers that cant put a controller down until youve aced every section, then youll probably spend a lot of your time here.

And when youre not playing Special Ops, the chances are youll be playing the games exhaustive multiplayer games online. COD4 had arguably the best online multiplayer game on console-dom. Its helmet crown thingy has probably taken a quite a bit of shrapnel from this title however. Again, due to the unique feel of the levels in the solo player, these work superbly in multi-player maps. The airport level alone is extremely well thought out, making sniping from the duty free certainly a refreshing change from crawling around on your hands and knees in yet another smelly jungle.

The only real disappointment is the exclusion of duck and cover options. Its omission was glaringly obvious having just finishing playing with Uncharted 2. Sometimes you do feel a little over exposed, standing at a corner, wondering what it is exactly that awaits you around it. The opportunity to take a sneak peak, possibly followed by a bit of cheeky from-the-hip fire would have been a welcome addition. We know its a first and not third person shooter, but surely something akin to that experience could have been catered for here?

But you really have to be a fussy old bleeder to be disappointed at all with anything this game has to offer. For the FPS fan, it has everything you could possibly want in a game, and then some. Everything from its high production values  a particular nod should go to the games composer, Oscar winner Hanz Zimmer (Rain Man, Gladiator etc), who has produced one of the best game scores ever  exhaustive playing options, to its absorbing game play. It really does have it all.

Ladies and gentlemen, the benchmark has once again been raised, and its going to take some beating. COD: Modern Warfare 2, we salute you.