Adventure. Thats all any of us want out of life, right? Okay, not adventure 24/7, that would be exhausting, and lets face it, leave little time to watch BSG on Blu-ray.

But thats the beauty of video games; they allow us to dip our stubby toes into a whole new world, allowing us to live the pixelated dream vicariously, as we take control of our video heroes. God bless em.

In 2007, developer Naughty Dog produced Uncharted: Drakes Fortune as an exclusive title for the then relatively new PS3. Although it was received well by the critics, it wasnt the commercial success it deserved to be. All that has changed however, with the games protagonist Nathan Drakes latest quest. 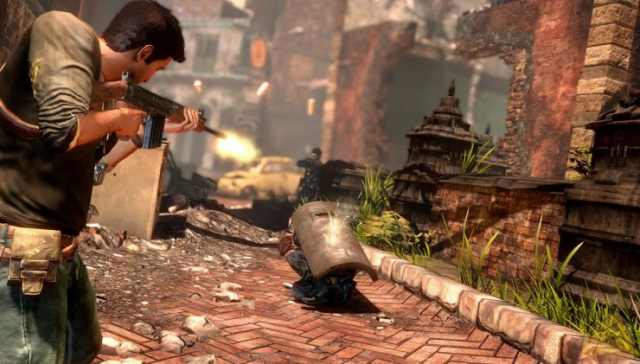 This sequel does little different from the original. Nathan is still the affable rogue, who climbs and swings like Lara (only better), throw punches like Indy, and rolls, shoot and ducks for cover like Marcus from Gears of War. So he wont win any awards for originality then, but he more than makes up for it in sheer likeability, and more importantly, playability.

This time Nathan is exploring the historical mystery surrounding Marco Polo. Polo left China in 1292, with 14 ships and 600 passengers; a year and half later he arrived home with only one ship and 18 passengers. Apparently, rather embarrassed by the great loss, he decided to keep shtum about the whole affair. Well you would, wouldnt you?

So Nathan sets out on a huge adventure to find out what exactly happened to the rest of the crew. Along the way he teams up with some new faces, as well as some more familiar ones, in a truly epic game.

As mentioned before, this game varies very little in terms of game play from the original. In fact it has dropped some of the more interesting mechanics it had in play, in particular its use of the sixaxis controllers that have all sadly gone. But it more than makes up for it in increased production values. Its not only the fact that it looks jaw-droppingly beautiful in places, but its also the way the story has been put together. Its difficult to not use the word cinematic in terms of describing the game (in fact, enter the words Uncharted 2 and cinematic into Google, and itll fetch 258,000 entries), so what the heck, we will too. Uncharted 2 is very cinematic (258,001).

Its also difficult not to describe the games intro as an opening scene, because thats exactly how it plays out. Nathan is in a spot of bother, and needs to get his act together fast. What the player isnt aware of initially is that what follows this is actually a flashback, as the game sends you back in time, building up the story to the point of the games cliff hanging intro. And it works seamlessly.

What also really stands out over other games is the writing. Not only do you get a sense of genuine relationships between Nate and his buddies, but the dialogue between them is some of the most entertaining to ever appear on a console game. Its full of cheeky banter that will slap a permanent grin on your face throughout. 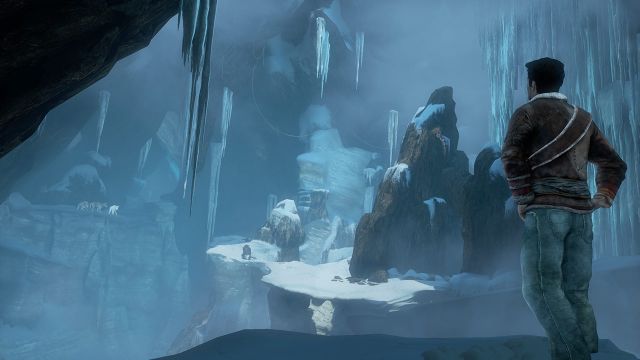 Great, bringing the factor 7 was a complete waste of time.

The game world is a lot more varied this time round, with more exotic locales to explore, and more exciting set pieces. Its a far longer single player campaign too, and it never feels like its outstaying its welcome.

The one disappointment that stands out is with Nate himself. He hasnt really developed since his last outing, with all the basic moves still intact. Sometimes it does feel like hes the weakest link in the environment, as he could often be found doing a little jig in front of a ladder, instead of simply climbing it automatically being so close to it. It was a little nag, but a nag nonetheless.

Those that were miffed by the inclusion of a certain enemy at the end of the last game may well experience déjà vu here. It feels almost like Naughty Dog have done it again as a wry parody of the original, particularly as this new, weirdy enemy appears at roughly the same point. It doesnt detract from the game, unless you are easily miffed, if anything its a welcome break from shooting/being shot by evil mercenary types.

So then, if directly compared to the original, its pretty much the same game, but a whole lot more of it, with shiny, sparkly bells on. Job done. But wait a minute, whats this? Multiplayer you say? Really? Yes, really.

Naughty Dog could have quite easily just strapped on a bare bones multiplayer, and peeps would have given them some credit for trying. But theyve gone way beyond that. Where it shines is in the varied maps you can play, which makes a difference from the usual COD environs, as good as they are. Theres also enough variety to keep the most die-hard multiplayer fan happy.

You can also play through levels with up to 3 friends (or complete strangers) on line in co-op mode, which strengthens the titles longevity.

With the PS3 enjoying a new lease of life, thanks to the cheaper, slimmer model and its more attractive price point, Uncharted 2: Among Thieves easily qualifies as a must have title for all PS3 owners. It may not quite be the second coming in gaming as declared by many, but what it is, is an absolute joy to play from beginning to end, to beginning again.

If its adventure you crave, just put an X next to the games title on your must have at any cost list. In fact, you can cross off everything else off of that list (except perhaps that space hopper youve been eying up, that can stay), as this is all the adventuring youll need.