The general consensus after Coldplay's performance at this year's Glastonbury was the band put on a spirited and entertaining set. What was more revealing however was the band's reliance on material from their debut album, as well as the absence of material from their awful last too long player Viva La Vida or Death and all his Friends.

The few tracks they previewed from this album at the event certainly sounded promising, but any improvement on their last couldn't be that difficult. 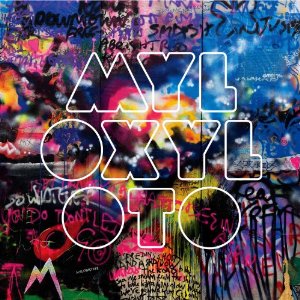 Disappointment kicks in way before the music starts with yet another poncey pretentious title. Chris Martin and his fellow band members appear to be going out of their way in attempting to promote themselves as the biggest cocks in the industry. This is a title that many thought would be difficult to wrestle from Bono's grip, but whatever you think of Bono as an individual, there's no denying that U2 can and still deliver the musical goods, as they proved by teaching Coldplay a hard lesson at the same Glasto.

It's a touch of Christmas that opens the album with a 43 second instrumental intro with the eponymous track. It then bleeds effortlessly into 'Hurts Like Heaven'. Why the need for a separate name for a short intro is a mystery. Actually it's not, it's just poncey and clearly the Coldplay way. There's an energy about the track that isn't completely offensive, but still sounds like it could be shamefully related to their last recorded material.

Oomph. Now that's not what you expect from a new Coldplay song. But 'Paradise' has some. Not a huge amount mind, but some. Any good work they may have achieved however is lost in some truly busy production. And then a clichéd chorus kicks in that just makes you want to burn your ears right off.

It's difficult to hate any track entitled 'Charlie Brown' but you have to hand it to the band, they manage just that. The track is another example of Coldplay creating songs from a restricted palette of bland sounds. Halfway through it mutates into almost a different song; sadly another really bad song, so it doesn't really help. The guitar riff makes it borderline tolerable in places though.

Track 5. A track that's difficult to forget. It's the time when 'Us Against the World' begins to melt our hate against Coldplay. Not thaw completely mind, but certainly some significant melting. It harks back to simpler times, when the band could construct beautifully fragile tunes that weren't fussy. Just Chris Martin's vocals subtly supported by s few instruments. My god, it's like the good old days. But perhaps it's too early to get excited.

Oh dear another pointless intro with its own name follows in the limp shape of 'M.M.I.X' which really is nothing other than the intro to single 'Every Teardrop is a Waterfall'. What the band does here is play the guitar in such a way that it represents the very tears the song describes as a musical waterfall. Talk about clever. No wonder these guys are educated types. And it rains down on us all. Oh what's that feeling inside? That'll be the bile rising once more.

'Major Minus' was one of the tracks they played at Glastonbury, and one that didn't sound that bad, at the time. And to their credit, the band doesn't over-egg the production on this rare occasion. It's the kind of direction that the band should be moving in. That being one that doesn't make whoever is playing it want to reach out and hit something/someone whilst listening to it.

And then there's the softness of 'U.F.O'. it's uncomplicated and not at all fussy. So why the hell can't the band just make more songs like this one?

And now for something completely different. Coldplay attempting to sound edgy and down with the youth. It's so damn contemporary that they've manage to huddle under the musical umbrella (brella, brella) of Rihanna for 'Princess of China'. This boosts the band's street cred no end, and will possibly open up their brand of pop wank (a genre created specifically for the band) to a wider susceptible audience. A clever marketing ploy? No doubt. Expect Chris Martin to take his top off for the video, looking super sultry.

Another quiet track featuring Martin's vocal's, gentle piano, and some weird musical heartbeat noise comes in the form of 'Up in Flames'. Again it's more reminiscent of Coldplay of old, although certainly not as innocent.

Yawn. Yet another named intro ('A Hopeful Transmission') acts as a prelude to 'Don't Let it Break Your Heart'. It's a track the band clearly made as an attempt to stir those from lumber at their live gigs by throwing in as many musical instruments into the mix as possible. It's certainly busy, but also audibly clumsy.

'Up with the Birds' would have been the icing on the cake, if the cake happened to be a rich and thoroughly tasty dish. Unfortunately the majority of it is too rich for anyone's tastes, and has a syrupy sickness to it that could cause diabetics to slip into a diabetic coma. But as icing goes, it does the job.

So this so-called concept album is a better effort than the last, but that's really not saying much.

Coldplay have, in the last three albums, somehow become a Christian Rock band. They may not be singing the praises of the Lord almighty, but they may as well be. It's all so incredibly bland stuff that has no emotional connection whatsoever.

The few stripped back, simplified tracks stand out a mile here, and only serve as a reminder of how good the band were back in the good old days, or BG as they should be known (Before Gwyneth). The only people who have any right in enjoying this album are those who enjoy playing the tambourine.

Someone should really create a poster, that could be stuck on lamp-posts and railings throughout the land with a picture of the band printed in the middle, with the word 'Missing' above it, followed by the following text: Band last heard making great music in 1999. Answers to the name Coldplay. Reward offered for safe return of their talent. Not the same as current tossers answering to the same name.

Although there are glimmers of what the band are obviously capable of, we still hope that one day someone will return the Coldplay of old. Until then, here's some muzak.