Its getting to the stage in the life cycle of music games where things are getting a little on the stale side. Once youve got all the band bits and pieces, you end up relying on the quality of the songs released. And with each release there are fewer classics and more filler.

When it gets it right it rocks though; The Beatles game was not only a stroke of genius, but was well presented and fun to play. The same cant be said for the solus games by Metallica and Aerosmith, unless you happen to be a die-hard fan.

So when DJ Hero came out, the cynics in us saw it as just another way of getting money from gamers with yet another expensive peripheral to shell out for. And yes, the turntable wasnt cheap, but the game deserved a lot more credit than most people gave it credit for. It was clearly made with TLC in the mix.

With all hands on the deck once again, what does this sequel bring thats new to the turntable? 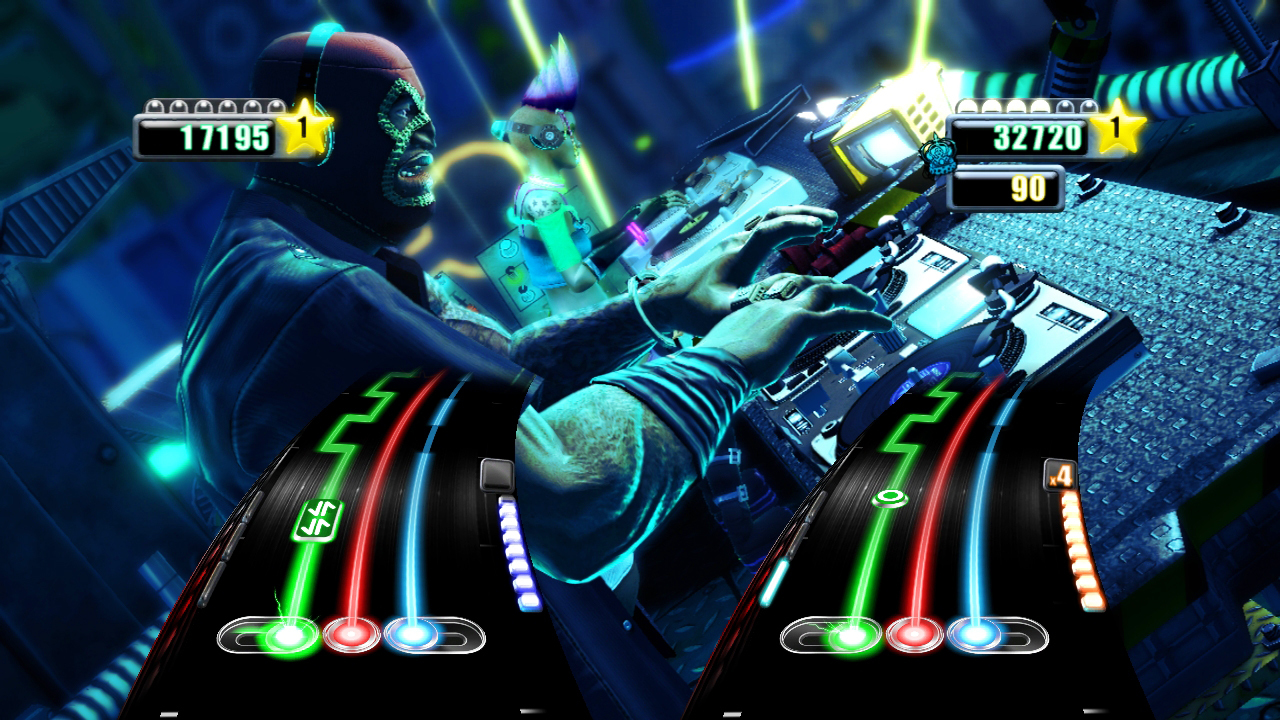 I am lucky y'know, for when zee rumbling in zee wrestling ring dries up, I have zese bad beats to fall back on, no?

First off is a story mode in Empire. Unlike in the first game where you would just play from set lists, Empire sees you as a young DJ making your way up the musical ladder. You play in cool clubs in various cities around the world in an attempt to win stars and unlock further stages. And of course there are the obligatory boss battles were you go one-on-one with some established hotshot DJs. Shockingly Pat Sharp isnt one of them. Its not rocket science, but works well for this style of game.

Where any game of this type lives or dies is with its musical content. And this sequel doesnt disappoint. To be honest, it makes such a refreshing change to not have to play through a lot of wet rock in a set list.

To be honest, wed be lying out of our bottoms if we said we were aware of all the artists on board. We know the classics like The Jackson 5, Grandmaster Flash etc, but some of these new whipper snappers we wouldnt be able to recognise if they knocked on our door with passports in hand. It doesnt matter though, because its all about the groove. No really it is.

If youve ever struggled with the guitar controller (and certainly the lefties amongst us have felt the strain with songs using more than three keys), you may have better luck here. The turntable itself allows for the use of only three fingers  the middle ones at that. Weve never really found much use for the second finger in from the pinky, but here it can soon find itself with newfound star status. Your other hand takes control of the cross fade slide that does all the mixing. It should be difficult but really it isnt.

And if you havent played a DJ Hero game before, it can be a little daunting at first, but with most things, a little practice gets you a long way. And you really do get into the rhythm of it, even if its not necessarily music you would listen to. This is due to the excellent bit of kit that is the turntable. Its a solid beastie, which is best played on something similarly sturdy. And no, your lap doesnt count. What youll find happening is that youll become more in tune with the technical process, as opposed to concentrating only on the music.

A nice touch is the inclusion of singing/rapping if you feel so inclined. Just connect a mic and you can sing along karaoke style, spit out some rhymes for a while, like Parappa, you can be a rapper, better in your own home, when youre all alone, so that no-one else can hear your drone. Word.

Online play is also available that is effectively just like a boss battle, but you know, with someone real at the end of your broadband connection.

Despite our cynicism DJ Hero 2 Rocks. If you already own the turntable its virtually a must-have purchase. And if you dont, and youre a bone fide fan of music-based games, youll be itching to get your hands on it. Should that be scratching? No youre right, too far. Now if youll excuse us, were off to save a life from a broken heart with a song or two...