There are some iconic characters in video gaming, the likes of Mario and Sonic are even recognised by non gamers around the world. It's easy to forget the unsung heroes/occasional villains though. Little plumbing Mario made his gaming debut in a 1981 arcade game. It's name? Donkey Kong. It was the little Italian however that went on to rack up appearances in over 200 gaming titles to date, and not the titular character.

In recent years however, Nintendo have seen fit to bring Donkey Kong back, most recently and noticeably in 2010's Donkey Kong Country Returns for the Wii.

Three years on and the smartly turned out gorilla makes his debut on the 3DS. It's just a shame that it's nothing more than a port of the 2010 Wii game.

Embarking on this old school side-scrolling adventure is Donkey Kong, with his jet-packed companion Diddy also available at various times. There are six worlds to explore: jungle, beach, ruins, cave, forest and cliff, with each one bringing their own brand of peril. Along the way there are so many things to pick up, including bananas, balloons, the letters K, O, N and G as well as puzzle pieces. Collecting them all will involve an incredible amount of skill and patience. And a barrel full of lives. Yes the game as inherited it's console version's fairly tough difficulty level, but thankfully, there's a slightly easier mode to play through which means you can stock up on an outrageous amount of balloons, that may well just see you through to the end. 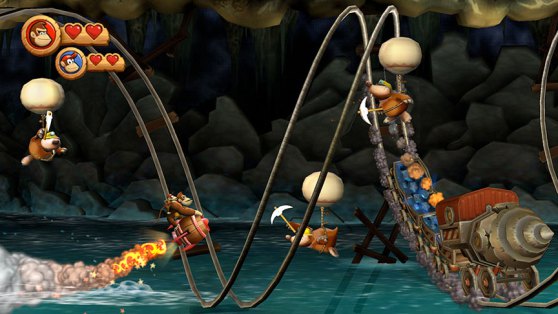 Oh-oh, think I need a change of pants. These rides at Alton Towers are getting downright dangerous.

The key advantage to this port has to be the 3D. The console version was presented in semi-3D as it was, coining the phrase 2.5D as it did. A proper 3D version then really manages to shine visually. It may look lush, but it can occasionally be distracting, as you're attempting, for the umpteenth time, to make that jump from one vine to the next, without falling to your death. Still there are less pleasing ways to meet your maker.

One issue that arose, which could possibly be down to the fact it was played on the smaller version of the 3DS, was that the characters themselves seemed quite small and distant at times on the screen. Another, was that the various buttons needed to be pressed often meant that the 3DS was wrestled awkwardly from side to side a fair bit, which can make your eyes feel like popping out with losing the 3D effect time and again.

But despite being a three year old title now  which as we all know is like decades in gaming years  Donkey and Diddy have aged particularly well. It still remains a tight and challenging side scroller and is certainly a welcome addition to the 3DS, still looking and sounding impressive in every way.