1977 was a pretty big year for the sci-fi flick, seeing the release of Capricorn One and Spielberg’s Close Encounters of the Third Kind. The real heavy hitter at the box office however was a film that took place a long time ago, in a galaxy far, far away...

Star Wars was a game changer on so many levels, but its phenomenal success lead Hollywood into seeking out the next big sci-fi epic, that would hopefully replicate the film’s out of this world achievements.

One possible candidate was Dune, an epic sci-fi story written by Frank Herbert in 1965. Darling of the indie film world David Lynch was tasked with bringing Herbert’s novel to the big screen, which was released in 1984. It bombed. Big time. Even Lynch himself washed his hands of it, disowning the final cut, claiming that he wasn’t allowed to produce the film he wanted, with too much influence from producers and financiers.

Since then Dune has become almost a poison chalice, with Lynch’s version seen as a warning as to how wrong it can go, even with a visionary director at the helm.

Stepping up to the sandy plate however is fearless French Canadian director Denis Villeneuve, who has already proven that he’s not afraid to tackle controversial projects after directing the sequel to the classic Blade Runner with 2017’s Blade Runner 2049. 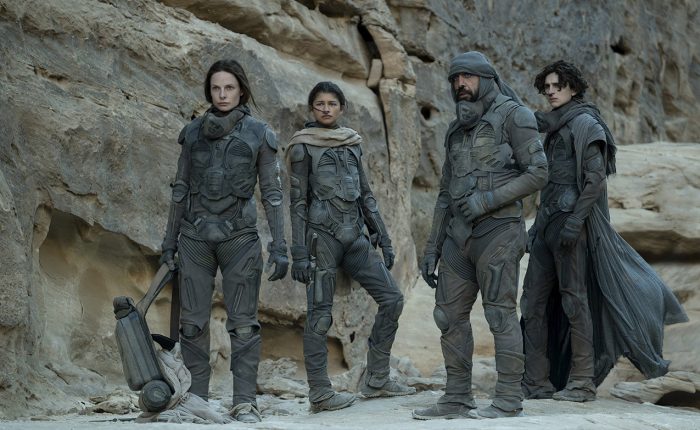 With the world about to end, the apocalypse range is so in right now.

Already presiding over the ocean planet Caladan are the House of Atreides, headed by Duke Leto (Oscar Isacc). The Emperor thinks he’s doing such a swell job of it, he decides to place the planet Arrakis under his leadership.

It’s a great honour for both him and his house, but not everyone sees it that way; House Harkonnen are understandably miffed, lead by Baron Vladimir Harkonnen (Stellan Skarsgård), whose house were overseeing the planet up until this point.

On the surface, literally, Arrakis doesn’t look much; a desert planet that looks as inhabitable as can be. But the planet has a rich resource, spice, that just so happens to be the most valuable commodity in the universe, that no one can live without.

But everything isn’t quite as it seems, as there are political power plays afoot that are likely to upset the balance of the current political landscape, where power is likely to be taken by force. 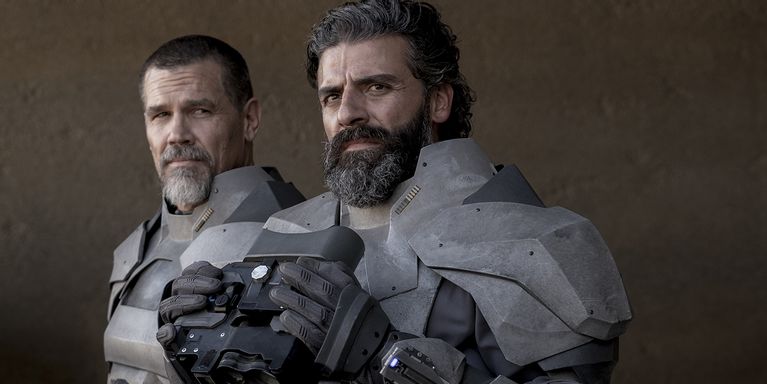 I have to hold this stern look for how much longer now?!

If you look at the box office returns, this version of Dune is already a huge success. So much so that a part two has already been announced. Much of its success must be down to its cast, which includes current poster heartthrob Timothée Chalamet, Josh Brolin, Rebecca Ferguson, Dave Baptista, Jason Momoa, Zendaya and Javier Bardem. It’s the kind of cast that Marvel would be more than happy with for one of their many superhero franchises.

What’s less impressive however is the film’s story; it is unbelievably dull and dry. It’s about as hardcore as sci-fi gets, where it just takes itself far too seriously, with lots of stern characters turning to camera, frowning at the situation in front of them. Much like the desert planet it’s set on, the film is completely devoid of life.

It also has no personality. If Star Wars has taught us anything, it’s that desert planets can be a go to destination: fancy a day out at the races, take in a pod race or two; or maybe live music is more your thing, then check out the bar in Mos Eisley; or visit the local Jawas who are always willing to trade their fascinating wares at competitive prices; or simply enjoy the setting of the planet’s two suns.

No doubt Villeneuve has done a good job of keeping the essence of the original book intact, but boy does it make for a dreary cinematic experience. It feels a big film without ever being epic. And with no memorable set pieces to speak of, and a colour palette that never goes beyond black, grey or sandy beige, makes Dune an attractive proposition on paper, but struggles to live up to the hype.