It’s probably a sign of the fairly dark times we live in that cosy games are so popular right now. You know the type of game, that isn’t too taxing, that may have you out planting crops one day, or fishing the next, or maybe cooking up a storm.

They don’t necessarily require the highest gaming dexterity, and aren’t likely to get your pulse racing, and yet they’re a comforting way of relaxing, and act as the perfect distraction to the noise around us.

One such gaming genre that that can be a calming influence is the sport of golf. One of the finest examples of video gaming golf have been produced by Japanese developers Clap Hanz with their wonderful Everybody’s Golf franchise, AKA Hot Shots Golf in the US. 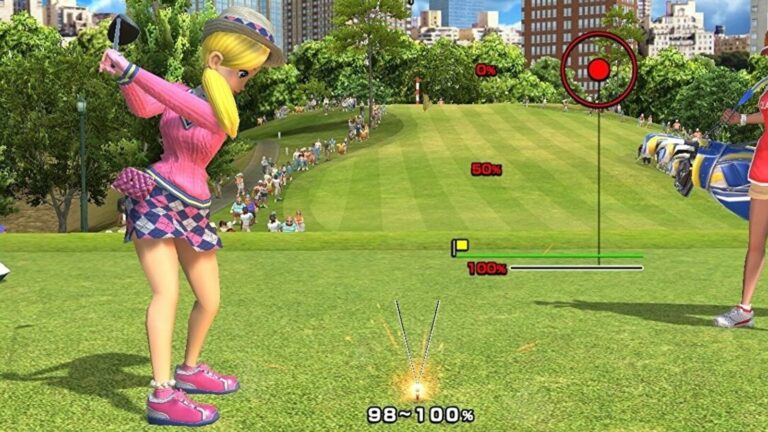 So you can see some of my butt, get over it bitches.

Since its debut in 1999, the series has been exclusive to PlayStation consoles, until now, where it swings onto the Switch.

The first thing you notice is a fairly radical change, from all golf games. Instead of choosing a player for every round, you choose individual players for every hole. So if you’re playing nine holes, then you take nine different characters with you.

You have to earn these characters though, as you start off with a few generic characters that you can’t level up. Play a few rounds however, and you get the opportunity to play for further characters with a bit of personality, as well as a curious line in golfing wear; we’re not sure how practical a tight, sequined dress is, but it appears its fair game here.

All of the players you gain are novices, but, depending on how you play, can improve every time you send them out. The deeper you get into the game, you’ll come across more experienced players, which is when you then have to make the difficult decision to cull some of those you had from the beginning. So in that way, it’s got some RPG mechanics, as the more your players play, the more their stats increase.

One of the most obvious omissions from the game is that of a shop, which is a tad disappointing. You can’t by any clubs, balls, or snazzy outfits to change into, which is a real shame.

The game gets around this in a way, by playing for costumes and colour changes in outfits for individual characters. Not only that, but if you win them, which can be easily done in most cases, you also increase the level cap of your character too. Most rounds consist of nine holes, and each hole has a number of stars attached to them, but this changes daily when they shuffle. The more stars you gain, you can unlock further courses. Simple.

As far as the courses are concerned, there’s nothing outrageous here, just your classic standard green, your Egyptian themed course, snowy course etc. And thankfully there’s no extra unnecessary obstacles, like you find in the recent Mario Golf: Super Rush, that make it so annoying to play. It’s just you, the ball and your club, having a bloody good time.

Unfortunately the online isn’t as robust as it could be, with only a few holes available, with up to four other players, which isn’t ideal. At least you get the option of the full nine holes with previous games, so this side of things is a letdown. You can create your own rooms for friends though, so at least that’s something.

There are tournaments however, which you can play over and over in an attempt to improve your overall worldwide standing. It can be a little demoralising though, having played what you thought to be a decent round, only to see the seemingly impossible scores achieved at the top; there were 17 under par over nine holes, that doesn’t even seem possible, but there you go. You do gain experience points from playing however, even if you don’t win it. Or in our case, even come in the bottom third. Ouch.

As far as the graphics go, it doesn’t look great. If you didn’t know it you could easily mistake it for a PS3 game, looking pretty underwhelming in places. The Switch can’t even handle shots on the putting green, with a fair amount of ghosting around the ball to the hole, whenever you hit it.

But it doesn’t matter because it’s just a joy to see developer Clap Hanz not only bring out another entry in this classic golfing franchise, but on a non Sony console to boot.

Certainly the new team dynamic is a positive one, with you constantly going though who you feel would be the best selection for each round.

There’s also a few ways to play, either touch screen or controller. And with you the controller there are two further ways to play, either with meters and timely button presses for power and aim, or using an interesting flick technique with the stick; although the stick technique was interesting, it didn’t feel as accurate as using the buttons, but it was nice to have the option. It does lack motion controls however, but they’ve always felt gimmicky to us, as well as borderline dangerous mimicking swinging a club, so it’s no real loss.

We were disappointed with the recent Mario Golf: Super Rush, for both its lack of content as well as its annoying game mechanics. But Easy Come Easy Golf’s arrival more than makes up for it. It’s the cosiest of titles, which sees you hitting a few balls out onto the fairway with various kooky characters.

Taking in a few rounds, with some oddball golfers, is just a real pleasure, with no cooking, no building, and even no fishing involved this time around, just golf, pure and gloriously cosy.

If you’re a fan of Everybody’s Golf then this will be a joyous homecoming and a must have title in your collection.