If you hadn't noticed, the landscape of popular music has changed tremendously over the last decade. It's this mix of not only how we listen to music, but also what we listen to, that means that artists that once made an impact, no longer do so. 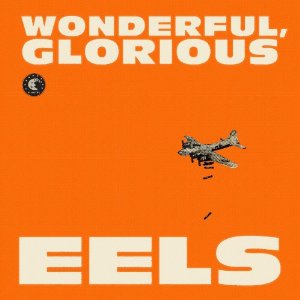 In 1996 E and his merry band of musicians released the Eels debut album Beautiful Freak, which contained the hit singles 'Novocaine for the soul' and 'Susan's House', both of which made an impact on the charts both sides of the Atlantic.

Fast forward to present day, and E and his Eely pals are just about to release album number ten in the digital shape of Wonderful, Glorious. And although it's been three years since their last albums End Times and Tomorrow Morning you can tell that the pressure's off a little these days, and that they can be fairly content just making the kind of music they want to make, as opposed to the kind of music that sells by the proverbial bucket.

Making an impact from the off is 'Bombs Away'; it's a moody little ditty, with menacing drums and piercing guitars, held together by some keyboards that tiptoe their way throughout. It's an entertainingly atmospheric way to open an album.

The tempo changes up a gear or two for 'Kinda Fuzzy', with a genuinely poppy sound. It slows to an unexpected quiet segment, before letting rip with what sounds like every instrument in the room.

"A happy accident, me running into you" are the opening lyrics to 'Accident Prone', a track that finds E in mellow mood, and despite sounding a little laid back, sounds rather chuffed to have found love, bless him.

'Peach Blossom' certainly brings on the noise, with its full-on wall of sound. It's a tad repetitive, particularly with its grinding instrumentation, but overall has a pleasant floral whiff about it.

There's more of a country vibe when 'On the Ropes' arrives. E is in an unusually optimistic mood too, declaring that he's not out but is on the ropes. Still, you've got to hand it to an Eels track for being upbeat.

The slow mood continues with 'The Turnaround'. It's pleasant enough, but isn't really that engaging.

An edge returns with the arrival of 'New Alphabet', where E declares that when the world starts making sense, he makes a new alphabet. Whether that makes his own name null and void is unclear.

There's a tangible sense of urgency with 'Stick Together' that almost takes your breath away. The drum beat carries the tune along at a cracking pace, making it one of the highlights of the album thus far.

Just as the album felt like it was energising itself, 'True Original' saunters along to bring the mood down once more. Again, it doesn't really do anything wrong, but there's no real emotional connection to the song.

A fifties vibe kicks in with 'Open my Present'; another bold and brassy number that commands attention. Toes will tap for sure.

There's a curious clunkiness to 'You're my Friend', where E says a musical thank you to a close buddy. It's better than saying it with flowers at least, and will certainly last longer.

With the album almost coming to a close, E brings 'I am Building a Shrine'; a chiaroscuro of a song, full of light and dark, all on a sixties bed of sound.

Bringing the album to a pleasant close is the retro-sounding eponymous track. A fitting end then, to a collection of songs with a solid identity that could only be attributed to E.

It's not a commercial album, but then they probably haven't made one of those in quite some years. This is an assured album that will appeal to fans of the band. It kind of loses its way on the slower tracks, as they in particular lack any firm direction, but the more up tempo numbers more than make up for them.

What it is then, is more proof, if any more were needed, that E is still a creative force worth listening to.