Journalists often compare one artist with another. On one hand its a useful way of getting across the kind of sound a new artist has; on the other its a lazy shortcut, one that requires less work by the journo, saving them the task of bothering to do their job properly. And yes, we do it all the time. 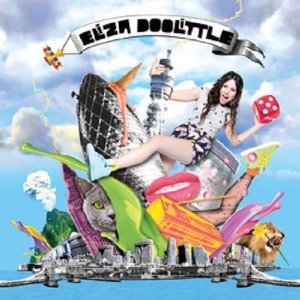 What we have here though is something far more sinister. The obvious comparison to this 22 year old Londoner is a certain Ms Allen. But taking that thought one step more, you could reach the conclusion, as we did, that Eliza and Lily are actually one in the same.

Here are the facts. Lily Allen decided to throw in her musical towel at the end of 2009, after two really good albums. Then, out of nowhere, this young oik Doolittle sprouts up giving it all the mockney jibber jabber.

Has anyone seen them in the same room at the same time? We rest our case. Besides, its far easier to believe that they are indeed one in the same, than to consider the possibility that someone else could sound so eerily like Allen. In fact, its not so much the vocal resemblance  although there are similarities there too  its the cheeky writing style and the borrowed musical styles that make them audio doppelgangers.

There are other female vocalists that have been compared to Allen, most notably Kate Nash. Nash shrugged off that particular comparison when she released her second album My Best Friend is You, with some truly dark and disturbing material that you would definitely cross over to the other side of the street to avoid.

Doolittle appears to be remarkably brash in her musical assimilation of Allen. But as Allen herself has given up the musical ghost, can anyone really blame Doolittle for picking up Allens mockney mantle? Not only that, she does a pretty good job of it too.

And thats the problem with Doolittles eponymous album, its actually quite difficult to hate. As soon as the opening track Moneybox lays out its wares for all to hear, its difficult not to succumb to its obvious bouncy charms.

A summery theme soon becomes apparent throughout with the arrival of Rollerblades, as it slides along to its warmly infectious double bass rhythm.

By the time Go Home rears its calypso head, youll be rubbing in the factor 40 without a second thought. Eliza is a little less mockney here, and a little more sultry. The tease.

And before you know it, youll be struggling to put the deck chair up in your front room with Skinny Genes swinging around in between your ears.

She proves that she isnt quite as course with her language as Allen and Nash might be, when during the fifties-inspired Missing, she sings that shes sure that a kick up the bum is all we need. No need for any arse for Ms Doolittle then.

With Back to Front Doolittle proves that she has a pretty good voice, as if any more proof were needed. Its a pleasant mix of melody and melancholy, which from this point on will be known as melodycholy. Or not.

Nobody is the Lily Allen track that Lily never released  except under her guise of Doolittle that is. Thats right Lily, the games up.

And before you try to put that deck chair away, the top five track Pack Up beams out of your speakers. Try as you might, its impossible to not fall under its summery spell.

Clearly with Allen MIA and Nash digging deep and dragging up some scary shit, Doolittle has settled nicely into that mockney niche quite nicely, thank you very much. And no one can really blame her. This effort proves that she certainly has the talent, in abundance, and if no-one else is doing it, then theres no-one better than her out there to fill those shoes.

Its not entirely sure what dear old enry iggins would make of this Eliza  he, like us, probably would Adam & Eve that it was really Allen in disguise  but theres no doubt hed fall for her sweetly charms.

Its not exactly original, but try telling that to your toes as they tap themselves into an early toe grave.