If anyone knows his way around a sequel it’s Sly Stallone. In fact one of the biggest surprises to date, in regards to his extensive career, is that his 1986 flick Cobra never got a follow up.

Already on there way are Creed II, Rambo 5 and The Expendables 4. So don’t discard a Cobra sequel just yet.

One film he needn’t have bothered with was 2013’s Escape Plan. If nothing else, Sly is certainly consistent, and the same can be said for this sour sequel.

Sorry for the mask, but at my age, all eyes have to be on me.

After all the hullabaloo Ray Breslin (Stallone) went through escaping from the near inescapable Tomb, he’s decided to put his knowledge of breaking out of places to good use, by starting his own security company.

This time however, he has a crew to do all the dirty work, which involves getting people out of places they can’t get out of themselves. Things get tricky though when one of his best crew members, Shu (Xiaoming Huang), gets taken himself, and ends up in a super hi-tech, black site facility, known as Hades. If only Ray knew something about breaking out of prisons... 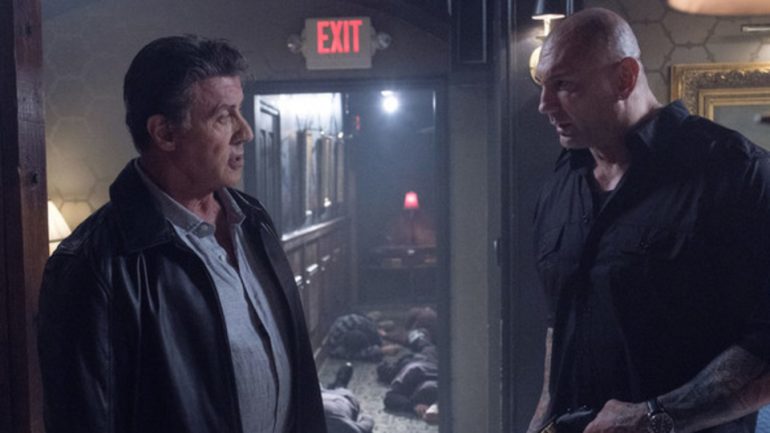 I swear I didn't touch them, they just slipped simultaneously - honest!

Escape Plan 2 suffers from all the criticisms that the original was guilty of. Its biggest crime however is that the concept behind them isn’t half bad. They are, after all, simply an extension of classic prison breakout flicks. Of course it’s all about the execution, and both films have been poorly put together.

Steven C. Miller appears to be the go to director for ex A-listers, who still insist that audiences want to see them in action flicks, although they should really be considering which condo in Miami to retire to. Miller has directed multiple Bruce Willis films that you would never have heard of, as well as a Nic Cage effort. Now he can add Stallone to his list.

Amazingly the film has a few things going for it; the prison itself is interestingly futuristic, which wouldn’t look out of place in a Tron film. The soundtrack is also techno-ly pleasing, supplied by The Newton Brothers.

And Dave Bautista is certainly a welcome addition, and his character should certainly have a spin-off of his own.

Despite this film tanking big time in the US, proving to be a box office flop, remarkably the third instalment is already in post-production. So it seems that there’s just no escaping this particular thrill-free franchise any time soon. We’d rather that Cobra sequel.