Although travelling to a foreign locale, where extreme sports and, if you're into that sort of thing, extreme sex are on the menu, is understandably appealing to many, there will be those who would be deeply concerned by the lack of any regular connection to the World and its Wide Web chums.

Thank the stars then for computer games that transport you to such exotic destinations, without the loss of any internet connection.

With the latest entry in the Far Cry series, you play Jason Brody, who, along with a couple of his brothers and a bunch of their friends, arrive on a seemingly idyllic tropical island, where there's an abundance of extreme activities to take part in. Unfortunately for the travellers, it all gets a little too extreme in the violence department, when a gang of locals decided to kidnapped them for ransom.

Fortunately for Jason, he manages to escape; but instead of buggering off on the next flight out, he chooses to hang around, track down his captive friends and release them. 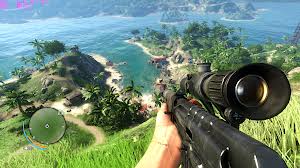 Finally, I can't hear that annoying holiday rep. Now it's time for pay back...

For the first time in the series, you play a regular Joe, with no military training whatsoever. Jason is a quick learner it seems, as he soon gets his hands on a plethora of hardcore weaponry to use at his disposal. This is just one element of the game that indicates it really should have been better off being called Far Fetched.

Another example is the peculiar mystic tribal path your character embarks on. The further into the game you go, the more tribal tattoos your character gets; luckily all that inked pain isn't in vain as each one signals a new ability of some kind. As far as sub-plots go however, this one is pretty silly.

As soon as you start exploring this vast island, it can all be a little overwhelming. As soon as you open the map, you'll get a sense of how big the playing area is.

It's never made quite clear but hunting is a big part of the game  and not just humans. In order to carry more items, money, weapons, ammo, etc, you will need get your Kirsty Allsopp face on and get crafting. If you want a larger wallet to carry more cash for example, you will need the hides of certain animals that can be found on certain parts of the island. Once you've hunted them down and killed them, you can then go about fashioning that particular item out of their skins.

The in-game instructions don't actually make a big deal about this, but you will actually need to do this a lot to keep your wits about you on the island; even when it comes down to increasing how many weapons you can carry at any time, you'll need to go hunting to expand your arsenal.

As it turns out, the hunting of animals side of things is a welcome balance to the story campaign. After Jason goes out on a mission to take out some nasty islanders, it's quite relaxing to then go out into the impressive foliage that exists on the island, and go hunt yourself something on the wild side.

Finding your feet on the island can take a while, but you soon find yourself effortlessly falling into the rhythm of your surroundings. The reality is, that there's not much in the way of originality here; there's definitely a heavy whiff of Just Cause 2, but clearly other titles thrown in for good measure too.

The sum of its many, many parts however, makes it an oh-so pleasing experience. There are so many detours from the main storyline to take, if you so wish. Path of the Hunter missions have you setting off looking for beasties, with the only caveat of being able to kill them with certain mission-specific weapons; Wanted Dead posters litter outposts, offering rewards for taking out various dubious characters; and Supply Drops have you racing by vehicle to a certain destination within a set time period. On top of that, you can also interact with a number of characters along the way that may well seek your help.

One annoyance that became apparent pretty early on is the games reliance on the Square button. Just the simple action of opening a door needs the Square button not only to be pressed, but to be also held down. Why any button needs to be held for any given time is a bit of a mystery these days, but for some reason it can really get on your goat if you decide to let it.

But then there are times when there are just some little nice touches that make you happy. Like having a camera with you at all times; before you get sucked into a mission, you can use your camera to record the movements of your enemies. Once they've been caught on camera, their movements from there on in, are there for you to see. This is particularly useful when you want to make a note of patterns of movements you can take advantage of.

Then there is the skill tree. With so many different skill sets to choose from to upgrade your abilities, you can do so in a way to suit the way you personally play. So if you have a penchant for being a sniper say, you can unlock various skills to suit you as you progress through the game.

The single player element is a huge and rewarding challenge, but it doesn't end there. Ubisoft have also included a generous co-op mode, that can be played both on and off line, with a separate story line that takes place six months before Jason and his chums arrive on the island.

And although the multi-player isn't exactly on par with the likes of COD it's not too shabby, especially with a Map Editor.

Far Cry 3 is that rare thing in that it's a game you can take your sweet time with. It's a lovely place to hang out in and simply explore, just watch out for those pesky Komodo Dragons. And if you ever get around to finishing the main single player campaign, it still has enough going on to keep you as an adopted islander for plenty of time after that. And all without having to slap on the factor 50, you couldn't ask for more.